Andrew Luck's retirement ruined the Indianapolis Colts' 2019 season. However, thanks to their offensive offseason acquisitions, the Colts should have great chance to go far in the 2020 playoffs.

By Lucas Ellinas
May 19, 2020
What's in this article? Click to show
The arrival of Phillip Rivers
The Colts second-round draft picks will play a big role in their playoff chances
The Colts will be back in the playoff hunt this season

The Indianapolis Colts were put in a difficult situation when Andrew Luck retired just before the start of the 2019 season. A once-promising campaign went up in smoke. However, the Colts made a number of offseason acquisitions that completely changed their offense and dramatically increased their chances of success in the 2020 playoffs.

The arrival of Phillip Rivers

The biggest addition for Indianapolis was obviously quarterback Phillip Rivers. Rivers had a legendary career with the Los Angeles Chargers, but 2019 was rough for both him and the team. He threw for 4,615 yards, but only 23 touchdowns and 20 interceptions. More importantly, the Chargers went 5-11, almost a complete reversal from the season prior.

It wasn’t all bad for Rivers, though. According to PFN’s Offensive Share Metric (OSM), which evaluates how vital a player was in creating their own statistics, Rivers exerted a great deal of influence over the Chargers offense. He had the eighth-highest OSM grade among qualifying quarterbacks at 27.08. So, even though the results on the field didn’t look good, Rivers was still contributing to his offense at a high level. Meanwhile, the Colts starter last season, Jacoby Brissett, had an OSM grade of 16.45, which was the worst of any quarterback in 2019.

On Rivers’ end, the change in teams is an upgrade as well, at least in one area: the offensive line. Los Angeles has struggled for years to put together a solid group of linemen in front of Rivers. Meanwhile, the Colts have spent their time putting together one of the NFL’s best units, led by guard Quenton Nelson, who was a first-team All-Pro in each of his first two NFL seasons.

For an aging quarterback like Rivers, who isn’t as mobile as he used to be, and is at a higher risk of injury, a strong offensive line might be the most important component of the offense. Combining Rivers’ offensive impact with better offensive line play should lead to a significant improvement from both parties, and hopefully, give the Colts the chance to compete for a playoff spot in 2020.

Aside from their offensive line, Indianapolis didn’t have the best players around Rivers when they signed him. Before the draft, Rivers’ best weapons in Indianapolis were set to be the talented but oft-injured T.Y. Hilton, and a good, but not great, running back in Marlon Mack. Both Hilton and Mack are solid players, but the Colts offense needed more help if the team was going to challenge for the playoffs in 2020. Fortunately, in the second round of the draft, the Colts selected a pair of players that could be perfect fits.

The first was Michael Pittman Jr., a wide receiver from USC. He wasn’t the highest-profile receiver taken, but he is arguably the perfect player for a Rivers-led offense. Pittman’s athletic profile and play style are uncannily similar to those of Mike Williams, one of Rivers’ favorite targets in LA.

In order to show help visualize similarities like these, PFN’s Ken Lee Platte created Relative Athletic Scores (RAS), which takes prospect’s pre-draft measurements and combines them into a single score. Below, you can see how Pittman and Williams performed. Their measurements were very similar, with Pittman actually scoring slightly higher overall despite being drafted far later. 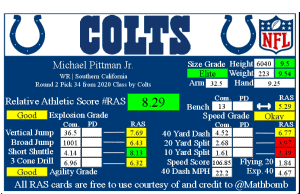 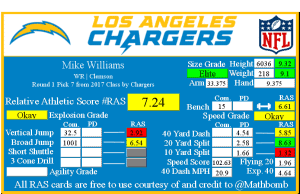 Physically, they are virtually identical. Williams measured at 6’4”, 218 pounds, while Pittman measured at 6’4”, 223 pounds. They had similar weaknesses as well, with both players lacking top-end speed. In the 40-yard dash, Pittman ran a 4.52, and Williams ran a 4.54. That isn’t slow, necessarily, but it is far from an elite time. The most significant difference between the two was actually in their explosiveness, as Pittman had a better vertical jump by four inches.

The similarities between the two players don’t necessarily mean that Pittman will be as good an NFL player as Williams is, but he does have the physical potential to do so. And that is important because there is a reason Rivers often plays with receivers that fit Pittman and Williams’ mold. He has a habit of throwing the ball into contested situations and needs a wide receiver that can win the ball when he does so. Pittman and Williams might not be fast, but they both have good hands and are willing to fight defenders for passes. That is exactly the kind of player Rivers needs, and Indianapolis might have found that player in Pittman.

The impact of Johnathan Taylor

The second player the Colts selected was running back Johnathan Taylor, the latest in a long line of Wisconsin running backs to reach the NFL. That list that includes Rivers’ former teammate Melvin Gordon, and two Super Bowl winners in James White and Corey Clement, but Taylor has the potential to be the best of them. His statistics at Wisconsin speak for themselves. He set the NCAA Division I record for the most rushing yards by a player through their junior season with 6,174.

He wasn’t just a statistical marvel, though: he also had the measurements to match. His RAS was the second-highest among running backs in the draft class, thanks in large part to an elite speed grade. 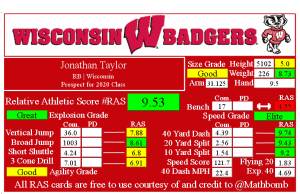 He had the fastest 40-time of any running back at the combine. He accomplished this feat despite weighing in at 226 pounds, which, as you can see, is big for a running back coming out of college.

Admittedly, Taylor isn’t a complete prospect. He still needs to develop more in the passing game, although he improved in that area somewhat during his last season in Wisconsin, and he fumbles far too often. However, his physical tools are undeniable, and they alone make him a valuable piece in Indianapolis’ new offense.

The Colts will be back in the playoff hunt this season

There might not have been a better landing spot for Rivers than Indianapolis. The team already had a strong roster last season and added players in the draft that suit their new quarterback’s strengths. When you combine Rivers’ gunslinging attitude, the Colts offensive line, the new weapons they acquired during the draft, and a defense that deserves more mention than I could give here, you have the recipe for an impressive team. Barring disaster striking them just before the season starts for the second year in a row, the Colts chances of making a deep playoff run in 2020 appear bright, even in what should be a very competitive AFC.

Week 11 NFL Players of the Week: Jonathan Taylor is a different animal, and the same beast

DeeJay Dallas Start/Sit Week 12: Can Dallas be a trustworthy starter against Washington?

Week 11 NFL Players of the Week: Jonathan Taylor is a different animal, and the same beast