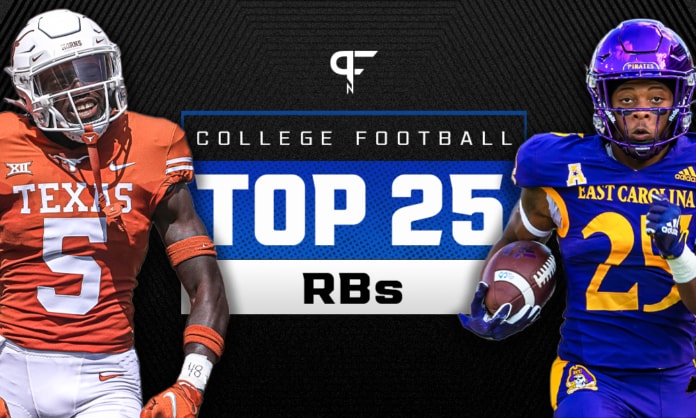 Bijan Robinson headlines the top college football running backs in 2021, but who else should you be watching out for this fall?

Let’s start with a breakdown of my top 10 running backs in college football so far this fall.

No single rusher embodies the phrase “running backs do matter” more than Bijan Robinson. The sophomore running back is the heart and soul of the Texas Longhorns offense. Texas looks like a completely different team when he isn’t being utilized to the best of his ability.

Robinson’s 652 rushing yards and 130.4 yards per game are both second among all college football running backs. Furthermore, he’s averaging 6.21 yards per carry with 7 touchdowns. Robinson gives Texas an all-around offensive threat, as he’s currently sitting second on the team with 16.7 yards per reception.

Like Robinson above him, TreVeyon Henderson has been the savior of his team’s offense. Despite having Chris Olave and Garrett Wilson, the passing offense for the Ohio State Buckeyes has struggled with its inexperienced QB situation. As a result, they’ve consistently relied on the freshman running back, and boy has he delivered.

Although his 510 rushing yards through Week 5 rank just 18th in the nation, Henderson’s 9.44 yards per carry is good enough for fourth among all college football running backs. Furthermore, he’s found the end zone 7 times while showcasing big-play ability with 2 rushes of 50+ yards.

Kenneth Walker III was an underrated, under-appreciated running back during his time at Wake Forest. Let’s not forget, the junior running back had 13 rushing touchdowns last fall but never received national recognition due to a relatively meager 579 rushing yards.

There has been nothing meager about Walker’s performance so far this season. While there are a number of factors influencing Michigan State’s incredible start to the campaign, Walker is surely among the biggest. He leads all college football running backs in rushing yards, yards per game, and ranks fourth for rushing touchdowns through Week 5.

Although Keaton Mitchell flashed signs of potential as a freshman, no one could have predicted his explosion as a sophomore this season. I certainly didn’t — he wasn’t included in the initial rendition of my College Football Top 25 Running Backs.

However, through Week 5 of the college football season, the East Carolina RB has been astounding. After putting up 222 yards and 2 touchdowns against Tulane, Mitchell features in the top 10 for yards per game and total yardage. He’s averaging a ridiculous 9.57 yards per carry so far this season, good enough for second in the nation behind Auburn’s Jarquez Hunter.

Can your running back chase down a defender with a freshly intercepted ball in his hand, climb on his back, and punch out said ball, allowing another player to recover the ball for your team? If the answer is no, that’s because your team isn’t BYU, and your running back isn’t Tyler Allgeier.

The 2022 NFL Draft prospect has been in sensational form so far this season. He ranks in the top 10 of college football running backs for total yards and yards per game, while his 7 touchdowns equal both Robinson and Henderson above him.

Before the season, I expected Sincere McCormick to break 1,500 rushing yards this fall. Although he isn’t currently on pace to match that expectation, mere statistics can’t fairly evaluate his influence on a UTSA team that is currently undefeated.

If you want one game that adequately sums up McCormick’s skill set and impact on the Roadrunners, grab the tape of the game against Memphis, put your feet up, and enjoy a running back strapping a team onto his back and dragging them to a win. While he might end up a little short of last year’s gaudy numbers, the UTSA RB still sits 11th in the nation for total rushing yards. Meanwhile, he’s found the end zone 6 times in five games.

You won’t find Spiller among the top 25 running backs in terms of total yardage, yards per carry, or even touchdowns. However, the Aggies RB has been a lone bright spot in a frankly turgid offense. His 6.5 yards per carry are significantly more than any previous season of his career.

Breece Hall‘s defense of his rushing title got off to a dangerously slow start. In his first two games, he averaged no more than 4.3 yards per carry, totaling a relatively substandard 69 total yards in each game. The Iowa State offense struggled against Northern Iowa and lost to emerging College Football Playoff contender Iowa.

Since then, however, Hall appears to be back to his devastating form. He has rushed for 100+ yards and 2 touchdowns in each of his last three appearances, moving into the top 10 college football running backs in the nation for total yards and rushing touchdowns.

The state of Texas plays host to two top 25 college football running backs, which should come to the surprise of absolutely nobody. Zach Evans was the RB2 of the 2020 recruiting class behind Texas’ Robinson, and we’re finally getting to appreciate why this season.

Evans didn’t have the same consistently explosive start to his career as Robinson. Yet, he’s already stamping his dominance over college football defenses this year. Through Week 5, he’s averaging 7.77 yards per carry while generating 110.75 yards per game. Both rank in the top 10 in the nation, despite only rushing for 27 yards in his first game of the year against Duquesne.

Having gone two seasons without as much as a sniff of a 100+ rushing yard game, Duke running back Mataeo Durant now has EIGHT 100+ yard games in his last 12 outings, stretching back to October last season. He’s been the Blue Devil on the shoulder of Duke’s offense, ranking in the top five for total yards, yards per carry, and rushing touchdowns.

These rushers just missed out on the top 10 of my college football running backs. However, be under no illusion — they’re among the best in the nation.