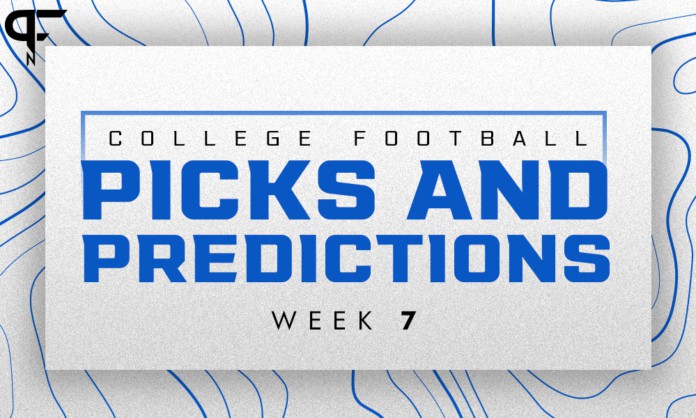 College football predictions, picks, and odds against the spread for Week 7

Let's take a look at the Week 7 college football odds, picks, and predictions. What games should you target?

Week 6 was yet another reminder of just how terrific and uneven college football can be. Some mighty teams fell, including Alabama and preseason Heisman favorite Spencer Rattler. Keeping what we learned from this past weekend in mind, we take a look at all the lines for this Week 7.

Let’s break down some of my favorite early lines for Week 7.

South Alabama had high hopes entering this season with a former Power Five quarterback at the helm. With an All-World type receiver in Jalen Tolbert, having Jake Bentley sling the ball to him all around the field gave credence to the Jaguars’  big aspirations. However, they’ve lost both Sun Belt conference games this season, and Bentley hasn’t thrown for more than 269 yards in any game.

Still, Tolbert has looked every bit the part of a top wide receiver. The game plan and play-calling haven’t quite allowed Bentley and Tolbert to establish a rapport. Bentley had thrown only a handful of red-zone passes this season prior to last week’s four-overtime loss to Texas State. Tolbert, meanwhile, has 544 receiving yards this year and is averaging a whopping 21.7 yards per reception.

Here’s how it’s looked for Georgia Southern on defense this season:

This is a recipe for a Thursday Night Showcase game for Tolbert and Bentley. Back the Jags.

The Tigers have been utterly defeated as of late, at least on the defensive side of the ball. They gave up 305 yards and 4 passing touchdowns to North Texas last week after surrendering 458 rushing yards to Tennessee the week prior.

In total, Missouri has allowed at least 24 points in every game this season and 35 or more in their last three. They’ve allowed a rushing and a passing touchdown in every contest. Missouri is giving up 286.8 rushing yards and 3 rushing scores a game, while they’ve also allowed 12 total passing TDs.

Missouri’s defense against the run this season:

Texas A&M rides into this meeting fresh off a historic victory over Alabama on Saturday. Aggies RB Isaiah Spiller is averaging 5.8 yards per carry and has scored 3 rushing touchdowns on the ground. Devon Achane and his world-class speed were on display against the Crimson Tide, and he’s also chipped in with 330 rushing yards and 2 scores on the season.

This is a matchup between a rushing attack waiting to explode against a run defense that has struggled against inferior competition. That sounds like a recipe for disaster for Missouri and a cover for A&M.

The Blue Devils have looked good in victories against Northwestern and Kansas. But they’ve looked incredibly mediocre and suspect in seemingly every other contest. Duke has especially seemed lost now that ACC play has begun.

On Saturday, they gave up 297 passing yards on just 12 completions to Georgia Tech’s Jeff Sims. Running back Jahmyr Gibbs had a big day through the air against Duke’s second-level defenders, as the Blue Devils couldn’t muster a pass rush before Sims got the ball out. This came one week after Duke allowed Sam Howell to dice them up for 321 yards on just 18 completions.

Virginia enters the game with QB Brennan Armstrong having thrown for 400+ yards in four of his last five outings. He’s averaging 410 passing yards per game ,and UVA has scored more than 30 points in all but one contest this season.

The biggest mismatch in this game, however, will be the Duke defense against Virginia’s slot receivers. Duke has shown an inability to take away underneath routes or stop receivers in the slot. They’re mismatched in coverage, whether it’s a linebacker or any combination of cornerbacks Jalen Alexander or Jaylen Stinson.

UVA’s slot threats include QB-turned-WR Keytaon Thompson and the speedy Billy Kemp. They line up a lot of their receivers inside, but those two are the primary threats. And threat is a great moniker for anyone who lines up at receiver for UVA this season.

Western Kentucky’s aerial assault is unlike most passing attacks. Bailey Zappe has been a revelation, quickly grasping the FBS-level of competition after transferring from Houston Baptist. Zappe has been so good that despite a 1-4 record, he’s thrown for fewer than 400 yards in just one game. Even in that game, he threw for 365 in a hard-fought loss to Indiana.

ODU won their lone FCS game this season and has been competitive since. After not playing football at all last season, they’ve been a remarkable story in getting to 1-5. In a battle of one-win teams and vastly different offenses, you’ve got to look at the individual defenses to see which one has a bigger task.

Though they may present a mismatch, the WKU passing attack might not be the biggest advantage for one team in this game. In fact, the Hilltoppers’ run defense has been horrid this season. And ODU’s rushing attack is due for a big game. WKU has given up 13 rushing touchdowns this season, allowing each opposing team to rush for more than their season average.

ODU is averaging 179 rushing yards a game and is fresh off Blake Watson’s best game to date. QB DJ Mack Jr. presents a similar challenge to that of UTSA’s Frank Harris, who WKU lost to this past Saturday. Old Dominion can compete thanks to their fresher legs. Though they may not win, they may be closer to a touchdown underdog at home rather than 2-TD dogs.

Monday Night Football picks, predictions against the spread for Week 5