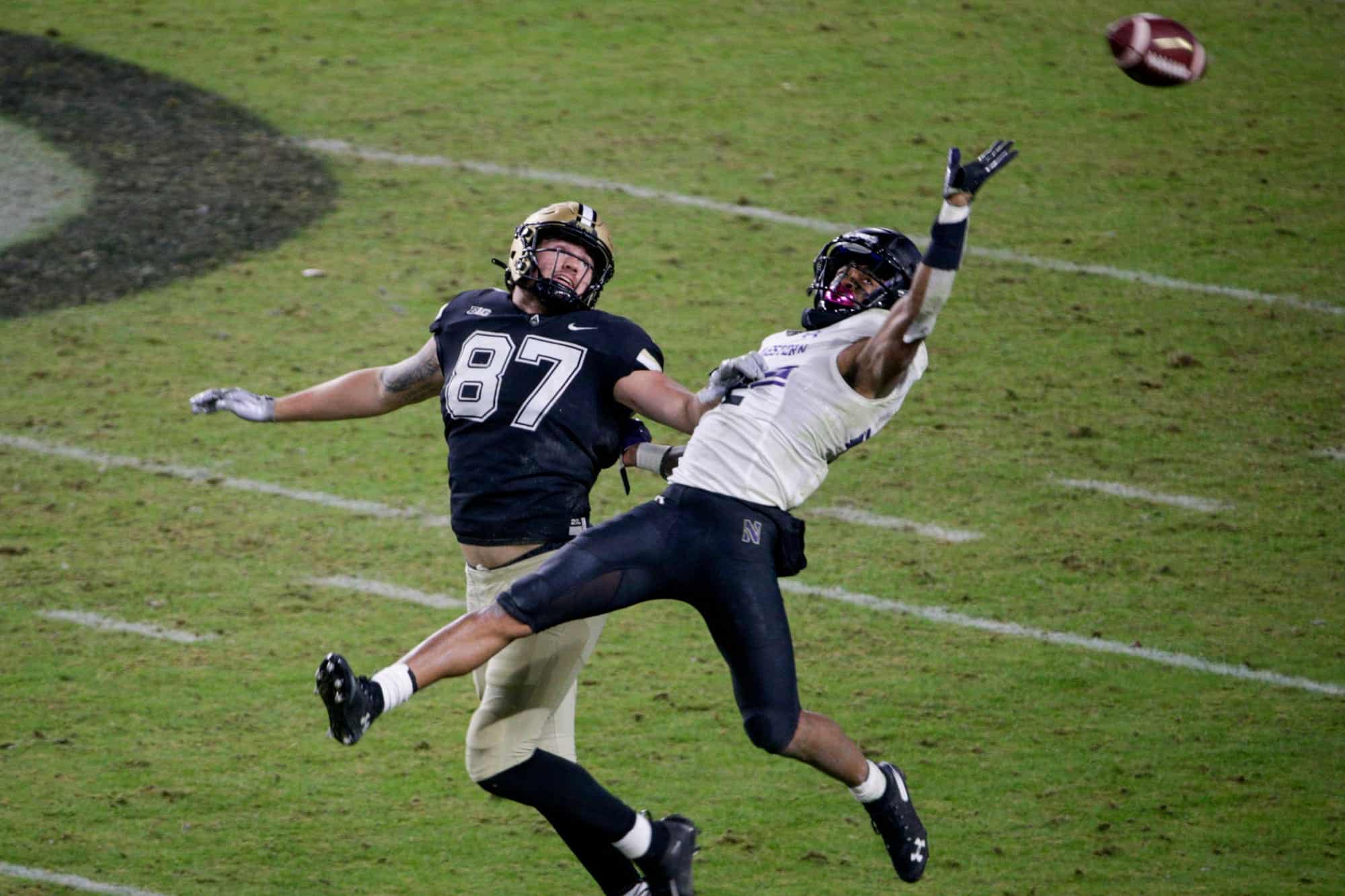 Purdue tight end Payne Durham (87) and Northwestern defensive back Greg Newsome II (2) go up but miss a pass misses a during the fourth quarter of a NCAA football game, Saturday, Nov. 14, 2020 at Ross-Ade Stadium in West Lafayette. Cfb Purdue Vs Northwestern
What's in this article? Click to show
Browns draft picks in 2021
Who did the Browns draft on Day 1?
Cleveland Browns grades for 2021 NFL Draft
Team needs for Cleveland coming into the NFL Draft
Want more 2021 NFL Draft news? Want to do your own mock draft?

The 2020 Cleveland Browns had the most wins for the franchise since 1994. In the process, they broke a playoff drought stretching back to 2002. It’s safe to say that the first season of the Kevin Stefanski era was a success. Did they make the right moves to turn that success into a Super Bowl contender in the draft? We hand out grades for all the Browns picks in the 2021 NFL Draft?

Who did the Browns draft on Day 1?

With the No. 26 overall pick, the Cleveland Browns selected Northwestern CB Greg Newsome.

Having addressed the safety position in free agency, the Browns meet one of their priority needs with the 26th overall pick of the 2021 NFL Draft.

To enumerate, they gave up the eighth-most passing touchdowns in the NFL in 2020. Greg Newsome is fluid, fast, and fierce, and will be able to slot straight into the starting lineup opposite Denzel Ward. He combines prototypical size at the cornerback position with impressive football intelligence. Having previously mocked the Northwestern cornerback higher than the 26th overall pick, it represents a great value pick for the Browns.

The Browns halt Jeremiah Owusu-Koramoah’s slide down the 2021 NFL Draft by trading up with the Chicago Bears. The safety-sized linebacker has been a dominant force for Notre Dame, displaying explosive ability to come downfield and hit you in the mouth.

Furthermore, he is blessed with coverage ability, making him a true three-down player. One potential reason for his slide is the difference between his listed playing and pro day weight. Additionally, his usage will determine his success in the NFL. That being said, getting a first-round talent midway through the second round is great value for the Browns.

Quite possibly the fastest player in the 2021 NFL Draft, Anthony Schwartz lands on the Cleveland Browns with the 91st overall pick. The Auburn wide receiver gives Baker Mayfield a field-stretching target and a dangerous weapon out of the backfield.

With the future of both Jarvis Landry and Odell Beckham Jr. in doubt, receiver was a genuine need for the Browns. Schwartz could prove to be a gadget player early on but may not see much playing time as a true wideout in his first season. Whatever his early role, Schwartz is an exciting addition to the Browns offense.

Former defensive lineman turned offensive tackle, James Hudson was impressive for Cincinnati for last season but will require some development. Great size and strength for the position. There may be bigger needs but Hudson provides offensive line depth.

After the departure of Sheldon Richardson, the heart of the Browns’ defensive line was left with a huge hole. Thankfully, they fill that hole with Tommy Togiai. Quick, explosive, and violent, Togiai represents excellent value. The one knock on the pick is that he is a little under-sized. However, that doesn’t detract from another excellent selection from the Browns.

The Browns add another piece of linebacker depth with the fifth-round selection they received with the trade with the Detroit Lions. Tony Fields is a tough run-stuffing linebacker who doesn’t add much in terms of pass coverage. As Tony Pauline’s 247th ranked prospect, this may be considered a little early.

Late in the fifth round, the Browns add some safety depth with Georgia’s Richard LeCounte. A former five-star recruit who has been a playmaker in the Bulldogs secondary. However, LeCounte’s limited athletic profile raises question marks about the impact he can make in the NFL.

Having had a successful start to the draft hitting on multiple needs, the Browns are in a position where they can select talented players regardless of positions. Demetric Felton is an exciting gadget piece who can act as a change of piece guy as a running back while possessing pass-catching skills as a receiver.

I love what the Cleveland Browns did with their first two picks, getting a starting cornerback in Greg Newsome and landing an absolute steal with Jeremiah Owusu-Koramoah in the second round. The Browns addressed all major needs, added depth on the offensive line, and found a burner at the wide receiver position. That left them with the versatility later on to select Demetric Felton. A great week in Cleveland for the hometown team.

Team needs for Cleveland coming into the NFL Draft

The Browns will likely bolster their defense and go BPA with their first-round pick.

The Browns’ addition of Jadeveon Clowney late in free agency points to where the organization feels they need to improve. Clowney is only on a one-year deal, and with no guarantee of production, Cleveland’s early priority must be finding a pass rusher for a defense that ranked in the bottom 10 at creating pressure last season.

One of the more porous passing defenses in the NFL in 2020 added some secondary pieces in free agency. However, they need to secure a playmaking cornerback to be the long-term option opposite Denzel Ward.

Sheldon Richardson was a salary cap-cutting loss in the offseason, and the Browns’ depth at the position is particularly thin. Defensive tackle figures to be amongst the Browns’ early picks in the 2021 NFL Draft.

Another position lacking in depth is linebacker. Although not considered by many to be a priority need, it would be a surprise if the Browns don’t use one of their 2021 draft picks on the position.

With the suggestion that both Jarvis Landry and Odell Beckham Jr. may not be on the roster beyond this season, the Browns would be wise to take advantage of a deep class of wide receivers to secure a pass-catching playmaker for Baker Mayfield.

Want more 2021 NFL Draft news? Want to do your own mock draft?