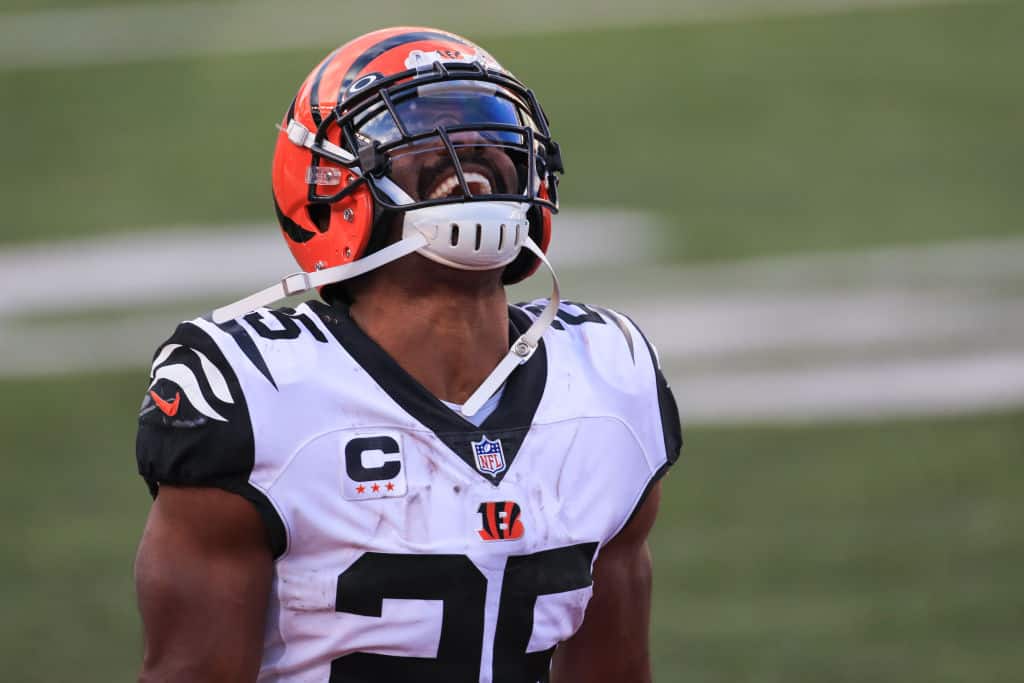 CINCINNATI, OH - NOVEMBER 01: Cincinnati Bengals running back Giovani Bernard (25) reacts after the game against the Tennessee Titans and the Cincinnati Bengals on November 1, 2020, at Paul Brown Stadium in Cincinnati, OH. (Photo by Ian Johnson/Icon Sportswire via Getty Images)
What's in this article? Click to show
The Bengals project to be around $43.4 million under the salary cap in 2021
Cincinnati has a handful of potential options for releasing players
The Bengals have players they can extend with their cap space in 2021
Want more NFL news and analysis?

After a season that showed some glimmers of hope with Joe Burrow under center, what is the salary cap situation for the Cincinnati Bengals entering the 2021 NFL league year? Let’s take a look at the Bengals’ salary cap situation and what options they have opening cap space ahead of the 2021 season.

The Bengals project to be around $43.4 million under the salary cap in 2021

As it stands, the Bengals have just under $150.1 million in commitments to their top 51 highest-paid players, with an additional $2.4 million in dead money. Therefore, the Bengals are currently around $43.4 million under the salary cap heading into 2021.

Cincinnati has a handful of potential options for releasing players

Even though the Bengals have plenty of salary cap space heading into the 2021 NFL season, they could put themselves in the position to be big players in free agency by clearing more space. They could provide themselves with a cushion to sign some of their pending free agents, such as Carl Lawson, and still have money to play with in free agency.

The Bengals are already set to lose Quinton Spain and Alex Redmond to free agency. However, they could also potentially move on from two more pieces of their offensive line. Bobby Hart is set to count $6.8 million against the Bengals’ salary cap in 2021. By releasing Hart, the Bengals could save as much as $5.8 million in salary cap space in 2021. They would be left with just $1 million in dead money.

Cincinnati could also potentially move on from center Trey Hopkins. Hopkins is set to count $6.6 million against the Bengals’ salary cap in 2021. However, releasing Hopkins would see the Bengals save $4.3 million, with a dead money charge of $2.3 million.

Additionally, guard B.J. Finney is set to count $3.3 million against the cap in 2021. If the Bengals were to release Finney, they would clear all of that cap space.

After a mixed career in Cincinnati, could we see Giovani Bernard on his way out? 2021 sees Bernard set to count $4.8 million against the Bengals’ salary cap. However, by releasing Bernard, the Bengals would save $4.1 million, leaving just $0.7 million in dead money.

Tight end C.J. Uzomah played just two games last season before tearing his Achilles. He is set to count $6.2 million against the Bengals’ salary cap in 2021. However, just $1.1 million of that would remain in dead money. Meanwhile, the Bengals could save $5.1 million by moving on from Uzomah this offseason.

The Bengals do not need to do anything drastic in terms of cap in 2021. Therefore, it is unlikely we see them look to restructure any of their higher-paid players. However, we may see them consider extending some of their defensive contributors this offseason.

Second-round selection from 2018, Jessie Bates, is entering the final year of his rookie deal in 2021. Bates has impressed so far in his career. The Bengals should consider extending Bates this offseason rather than letting him hit free agency. By doing so, they could find a way to open up another $1 million in cap space.

Sam Hubbard has also been an impressive part of the Bengals’ defensive line since being drafted in 2018. An extension for Hubbard could see the Bengals save $1 million in salary space. However, it is more likely any extension Bates and Hubbard sign increases their salary cap hit for the Bengals in 2021.