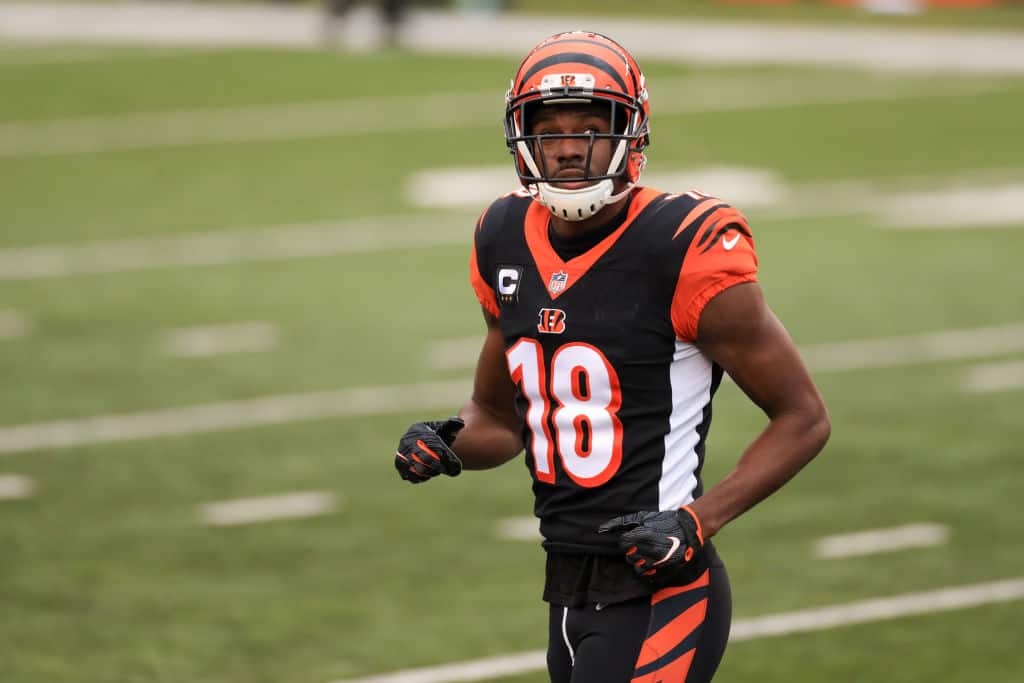 The Cincinnati Bengals head into the 2021 NFL free agency period with 28 players who will be free agents when March rolls along. With the sixth-most cap space at their disposal, the Bengals need to address their numerous holes on their roster while finding a way to protect Joe Burrow.

The Bengals have a star in the making in Joe Burrow. He was everything they wanted him to be when taking him with the first overall pick in the 2020 NFL Draft. However, his season came to a screeching halt when he suffered a gruesome injury to his left knee.

Up to that point, the Zac Taylor offense was humming. Despite facing pressure on over 20% of his attempts, Burrow still completed over 65% when facing a rush. In 9.5 games played, Burrow had 2,688 yards and 16 total touchdowns.

Given the timing and severity, it’s unknown if Burrow will be back for the start of the 2021 season or even by the mid-point. Given the Bengals likely won’t have much to play for next season, they shouldn’t rush him back. On the contrary, what they can’t wait around for is getting the rest of the team filled out.

That way, when he comes back, the team is capable of utilizing his immense skill set. That process starts with the Bengals being aggressively pursuing free agents in 2021.

If the Bengals somehow fail to address this problem, it is a complete and utter failure by the organization. The fifth pick in the upcoming draft has to be either Penei Sewell or Rashawn Slater. Outside of Trevor Lawrence, it is the easiest pick to make of the draft.

In addition, the Bengals need to pursue OG Joe Thuney heavily in free agency. He was the best player for the New England Patriots, and he’s the best interior offensive linemen in the 2021 free agency class. The trio of Jonah Williams, Thuney, and Sewell/Slater would give them one of the best groups in the NFL.

The Bengals certainly have the cap space to pull off such a free agency signing in 2021. According to Over The Cap, the Bengals are a projected $32.396 million under the salary cap. That’s assuming the salary cap falls to the estimated $176 million.

Outside of the offensive line, the Bengals need to address positions of need. When looking at Cincinnati, well, how about what they don’t need? Quarterback, running back, one cornerback, an edge, and one safety are set. That about narrows things down.

A.J. Green will leave the Bengals in free agency in 2021

This feels like something we have talked about for the last six years. A.J. Green played the 2020 season on a franchise tag and had an overall frustrating season. While he saw over 100 targets for the eighth time in his nine-year career (104), Green only caught 47 passes (45.2%) for a career-low 523 yards and 2 touchdowns.

Heading into year 11 of his career, Green has spent his entire career on a team that didn’t ever make a deep run in the playoffs. Now is his chance to go to a team on a shorter contract and take a shot with a contender. In reality, the Bengals won’t be considered a contender until at least 2023, even if they knock it out in free agency in 2021.

Can the Bengals keep both defensive free agents Carl Lawson and William Jackson in 2021?

Carl Lawson and William Jackson will both be at top market value for their positions.

According to Spotrac, Lawson carries an estimated $8.8 million market value on a four-year, $35.46 million contract. Likewise, Jackson is estimated to be around $6.3 million on a three-year, $18.912 million deal.

The case for Lawson is easy — the Bengals have no pass rush without him. He proved himself as a starting edge defender this past season and is just 25 years old.

On the other hand, Jackson will likely see several offers come his way in free agency as starting cornerbacks are highly sought-after commodities on the free agent market. For the Bengals not to lose him as a free agent in 2021, they might have to go above market value.

Cincinnati could free up another $21.7 million by releasing Geno Atkins, Bobby Hart, B.J. Finney, and Josh Tupou. In doing so, the Bengals could re-sign both Jackson and Lawson as 2021 free agents and make some big splashes in free agency.