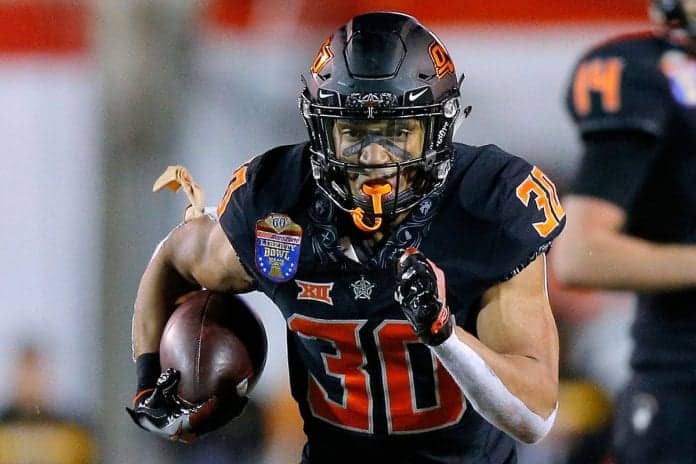 In a competitive Big-12, featuring the likes of the Oklahoma Sooners and the Texas Longhorns, the best offense in the conference might just belong to the Oklahoma State Cowboys. The offense is headlined by a pair of dynamic weapons in running back Chubba Hubbard and wide receiver Tylan Wallace, who just so happen to be the top Oklahoma State 2021 NFL Draft prospects.

Additionally, redshirt sophomore quarterback Spencer Sanders is coming off of an impressive freshman campaign, where his exciting play led him to being named the Big-12 Offensive Freshman of the Year. While the Cowboys passing attack should blossom given the development of Sanders and the return of Wallace from an ACL injury, it is the Oklahoma State rushing attack that makes them special.

An experienced offensive line, paired with one of the most dynamic runners in college football, makes the Oklahoma State offense scary. In 2019, the Cowboys averaged 229.6 rushing yards per game, which was good for 17th best in the nation. It should be no surprise that the top Oklahoma State 2021 NFL Draft prospects all come from the offensive side of the ball.

Hubbard bust onto the scene in 2019, rushing for 2,094 yards and a staggering 21 touchdowns while averaging an impressive 6.4 yards per carry. His play led to him being a finalist for the Doak Walker Award, which is given to the best running back in college football.

Hubbard is an extremely patient runner, who reads blocks well and possesses tremendous instincts. He has the ability to move like a human joystick, which allows him to explode through small openings. His explosiveness, elite production, and acceleration are his biggest strengths.

One of my favorite characteristics of Hubbard’s game is that he is not afraid to take the yardage that is given to him. Too often, we see running backs who are always trying to hit the home run, but Hubbard can churn out 5-yard carries with ease.

Is Hubbard the best prospect in 2021?

He needs further development as a receiver out of the backfield and must improve in pass protection, but as it stands today, Hubbard is in a battle with Clemson’s Travis Etienne to determine who is the top running back prospect in the 2021 NFL Draft.

The clip below will highlight Hubbard’s ability in a nutshell. A small opening presents itself and Hubbard explodes through the hole for a 32-yard touchdown.

Chuba Hubbard finishing this game like he started it! #OKState

Hubbard has 256 yards on 32 carries and 3 touchdowns pic.twitter.com/JiHTcMmFFO

If Hubbard can repeat his brilliant 2019 season again in 2020, there is no doubt in my mind that he can become a first-round selection in the 2021 Draft. While the value of running backs in today’s NFL has taken a bit of a hit, Hubbard’s explosiveness and productivity will not go unnoticed.

Tylan Wallace missed the final five games of the 2019 college football season due to a torn ACL, but prior to the injury, he was a nightmare for opposing defenses. In nine games, he hauled in 53 passes for 963 yards and eight touchdowns. This came on the heels of a brilliant 2018 season, where he caught 86 passes for 1,491 yards and 12 touchdowns. When healthy, there is no doubt that Wallace is a game-changer.

Related | Can Tylan Wallace reclaim his high draft stock after an ACL tear?

I feel comfortable bestowing an incredible honor to Tylan Wallace, his game reminds me of Carolina Panthers’ legend Steve Smith Sr. He is an alpha, who despite his small stature excels in traffic. He plays the game with a physical brand, allowing him to excel at the contested catch and create yards after the catch in chunks.

He doesn’t possess world-class speed, but he is very sudden and can create separation with ease. Also, Wallace possesses strong hands and is a magician when it comes to contorting his body to make the difficult reception.

As I mentioned above, Tylan Wallace is physical. The clip below will highlight this as he catches a screen pass behind the line of scrimmage, runs over three defenders, and takes the pass to the house for a 69-yard touchdown.

Tylan Wallace did not lose two yards on this play. https://t.co/GSWj7DeYpO pic.twitter.com/RIEnlyrDSL

Wallace might not run the fastest 40-yard dash time at the NFL Scouting Combine, but his tape screams big-play ability. He likely won’t hear his name called until Day 2 of the 2021 NFL Draft due to an absolutely loaded wide receiver class, but whoever does land Wallace will be getting one hell of a player.

Oklahoma State right tackle Teven Jenkins isn’t a household name quite yet, but when NFL front offices watch more tape of him, his draft stock is going to skyrocket. He has 26 career starts during his tenure at Oklahoma State, showcasing tremendous positional flexibility and reliability. Without question, his best position is right tackle, where he lined up a majority of the time in 2019 without giving up a single sack.

Jenkins has a tremendous frame and plays the game with force. He stands out as a mauler in the running game, possessing the raw power to obliterate defenders. Jenkins, a two-time All-Big 12 honorable mention, was one of the pillars of Chuba Hubbard’s success in 2019.

Take a look at the right tackle in the clip below, as it showcases Jenkins’ attention to detail and understanding of fundamentals, as he extends his arms and drives his feet to wash out his blocking assignment.

First play of the game and you can already see how good Teven Jenkins (@TevenJenkins) is in the run game. Consistently wins every rep, and Teven is a huge part of the potent rushing attack OK State has. Expect him to go very high in next years draft. #NFLDraft #DraftTwitter pic.twitter.com/Yldnyzq6Kl

When the dust settles, Teven Jenkins will likely be a third-round pick in the 2021 NFL Draft and the first Oklahoma State offensive lineman selected since Russell Okung.

Josh Sills is a newcomer to the Oklahoma State football team, transferring from West Virginia University, where he was a two-year starter at guard. During his time at Morgantown, Sills compiled 22 starts, even earning second-team All-Big 12 honors in 2018. He has two years of eligibility remaining, so it will be interesting to see if he declares for the 2021 NFL Draft at the conclusion of the season.

Sills is a lunchpail type of player, possessing toughness and the ability to move quite well given his size. He tends to be a tone-setter, playing with strength and a nasty streak.

One thing that stands out when watching Sills is his ability to pull. He has quick feet given his size and moves with intent.

Sills will not be an early draft pick, as he doesn’t possess the athleticism that will catch scouts’ eyes. However, he is a Day 3 player who could make an NFL roster, provide solid depth, and be a spot-starter if needed.