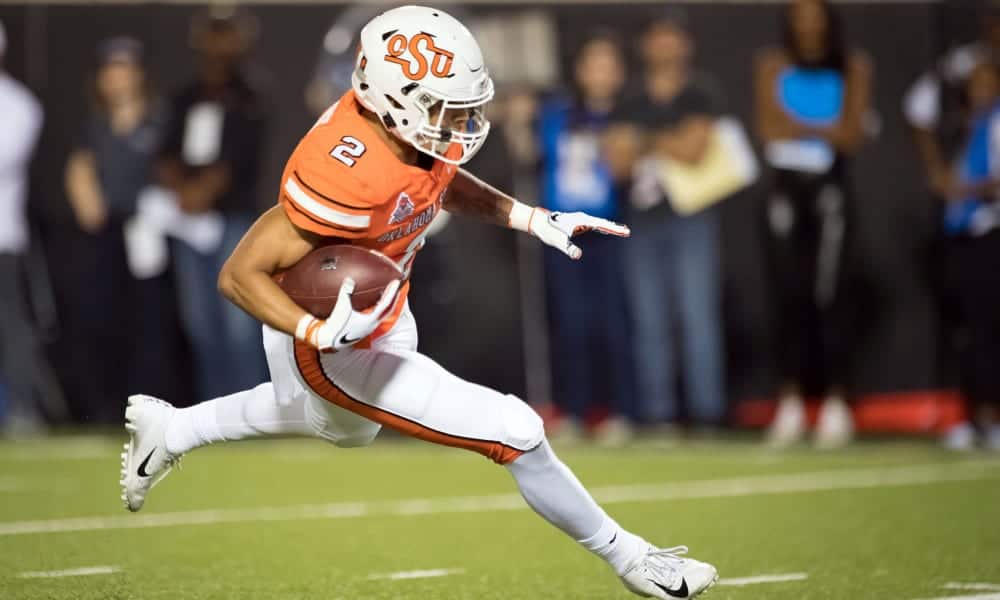 He finished his career at South Hills High School in Fort Worth, Texas with 182 receptions, 3,760 yards, and 48 touchdowns. In his sophomore season (2018) with the Oklahoma State Cowboys, he carved out 86 receptions for an eye-popping 1,491 yards and 13 touchdowns. That sophomore performance propelled him to a first-team All-American nod from ESPN and a 2018 Biletnikoff Award finalist, where he was beaten out by Alabama’s Jerry Jeudy.

Wallace is an absolute dog when targeted. When targeted, you already know Wallace will give his all to fight for the ball. He makes no qualms exposing his body over the middle on dig routes or elevated along the sideline with a safety closing because his (bad) quarterback never even dreamed to look said safety off. He simply wants the football. He’s a finisher! His downfield ability is reminiscent of Tyler Johnson of Minnesota, as someone who dominates downfield in contested situations despite not possessing outstanding height or length.

That same mentality shows up as a blocker as well. It would be disingenuous to call him a great blocker, but he definitely takes pride in this area highlighting his effort level. Wallace does a good job taking strong angles and creating good positional leverage allowing him to shield off defenders from a rushing lane. He does a good job sinking down, creating a wide base, and flashing tight hands to engage. But, when a defender doesn’t have a keen eye on him, he’ll sneak up and really attempt to deliver a blow to disrupt a defender’s balance.

Atlanta rapper T.I. actually wrote a song about Wallace. “Rubber Band Man” may have been released when Wallace was four, but the title is so fitting it’s impossible not to believe T.I. hadn’t seen the future for inspiration.

Wallace contorts his body in unimaginable ways to finish catches outside his frame and through defenders. Think of his catch radius as the picture of the red circle surrounding the human anatomy from “The Da Vinci Code” mixed with the boneless structure of the girl from “The Ring.”

LOL this is just silly pic.twitter.com/OqhlE2jHKn

This allows him to finish bad-ball catches with a sense of ease you don’t see from most other receivers. He’s able to drive on stop routes to come back to the football and dive low for out-of-frame shoestring catches.

But his flexibility doesn’t just help him get to passes in the air. His ease of movement allows him to easily sink his hips to plant and drive on stop routes and he easily bends his ankles and tilts his upper half to carry speed into intermediate route breaks.

Wallace is a strong hands catcher whose ability is accentuated by his flexibility and catch radius. But that’s not the end of the story for him as a pass-catcher. He has some of the best reactive athleticism in football. One would have a tough time finding a player who can react to and flash hands as late in the process as Wallace. This makes adjusting to the football in the air look easy for him. If he’s able to cleanly get two hands on the ball he finishes.

He doesn’t have the natural length of a Collin Johnson or Denzel Mims, and that sometimes hurts him as he’s not able to sneak his arms through a defender’s on balls thrown behind him with a defender trailing. However, if the ball is elevated, he’ll provide some eye-popping finishes.

I really thought he was about to finish this catch. pic.twitter.com/jRwdLTJKGI

It’s important to look at the details. Wallace actually isn’t a fantastic route runner. He has a lot of room to grow in that area, but his ability to create space at the breakpoint and at the catch point is a strength. Even with his lack of ideal size, he provides physicality at the top of routes allowing him to create enough of a throwing window for his QB to feel comfortable hitting.

But his best attribute in this area comes against off coverage. He does a phenomenal job of selling vertically, stemming his route right at the center of the cornerback before sinking down, stepping on the defender’s toes, restemming as if he’s going to hit a secondary release going vertically, and open up the taps to separate deep. Then he plants hard and drives back to the football, whether on a curl or comeback.

The reactive athleticism Wallace displays in his ability to flash late hands and eyes follows him post catch as well. He does an outstanding job making the first immediate defender miss with a strong plan and smooth change of direction. He doesn’t have the speed to scare pursuit angles and he won’t break a ton of strong tackle attempts, but he’s no slouch. Wallace has deployed a strong stiff arm with his right arm and his run against Iowa State shows the scrappy attitude he plays with that’s highlighted earlier in this piece.

Where Wallace needs to improve

Usually, these two would be separate categories. However, for Wallace specifically, beating press or soft man is a big reason people say he is not a great route runner, it’s best to keep them together.

He really shows some struggles against press. Against Baylor in 2019, there were multiple examples of him getting bullied at the line-of-scrimmage. Even in times where he’s not contacted and carried, he often takes such a wide path in his release that it takes him off the red line that he should be keeping in his route. His footwork and hands-on the snap are a bit primitive, which is somewhat expected given the lack of press he sees in the Big 12.

He also needs to become more nuanced and work on shortening his stride length a bit when he’s trying to break hard. He’s a strider, which doesn’t allow him to maximize his natural fluidity and explosion on those hard 90-degree breaks.

The Cowboys don’t run a complex passing attack, and his route tree shows it. He works a lot on the vertical plane and on quick slants off RPOs. He has the athletic ability to be a good route runner, but those examples simply aren’t there on film in the Mike Gundy offense.

Even though Wallace is a competitor, more physical corners give him a lot of trouble. If he’s unable to improve his upper body strength he’ll most likely be relegated to the slot at the next level to get more favorable matchups against smaller corners. However, his current route tree is best suited for playing in a Z role, so there could be a bit of a learning curve if moved inside at the next level.

Matthew Valdovinos, PFN draft analyst, placed Wallace in his preseason WR rankings in the ninth spot. Hopefully, Wallace comes back from injury strong and more technically refined. The best-case scenario is that this time off his feet has allowed him to focus on his upper body strength. But in a loaded 2021 class, his ability to make the “wow” catch consistently sets his game apart from most. Look for Wallace to produce at the same rate as his 2018 campaign with another Biletnikoff Award finalist nod.

In this article:Featured, featured, Tylan Wallace