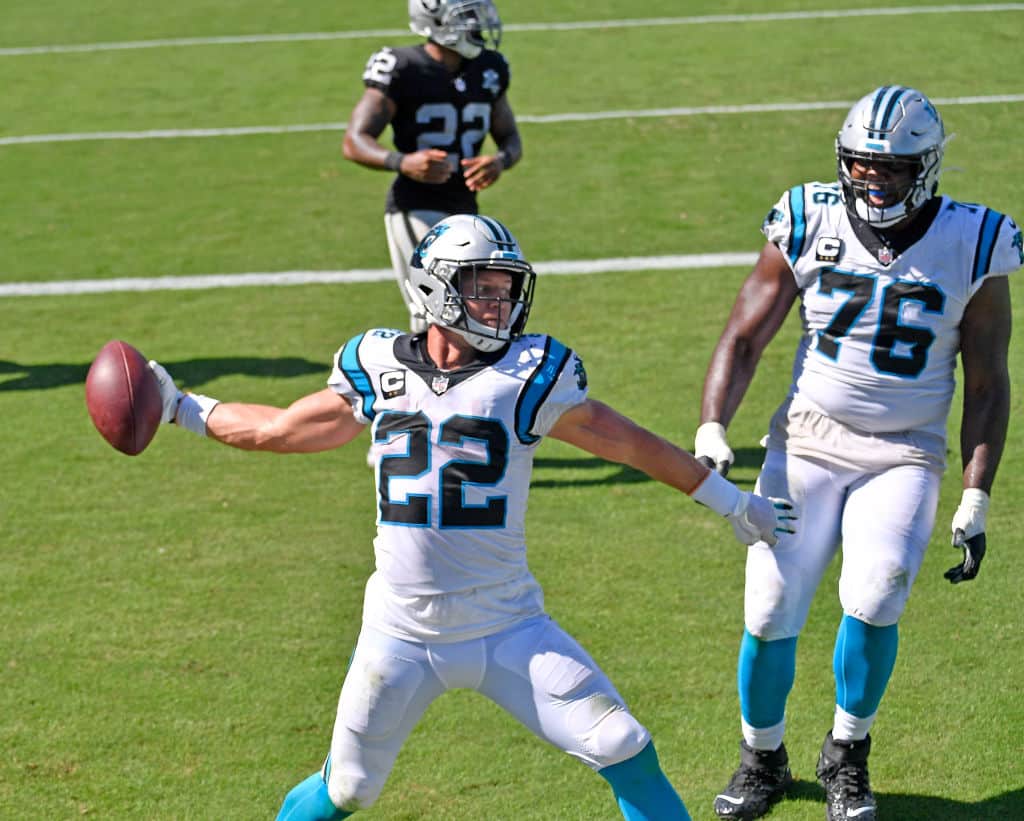 Fantasy managers and Carolina Panther fans alike came into the 2020 season with high hopes for plenty of dominant performances from running back Christian McCaffrey. He was either the first or second pick in fantasy football in almost any format and was easily one of the best pure RB options in the NFL. While his NFL value has remained about the same, Christian McCaffrey’s fantasy value has taken a slight hit due to his absence, and Mike Davis’ fantasy value has gone through the roof. If he does make his return in Week 8, should you put Panthers RB Christian McCaffrey in your lineups on Thursday night when the Panthers take the field against the Falcons on Thursday Night Football?

Update: NFL Network’s Ian Rapoport reported that McCaffrey was not activated from Injured Reserve for tonight’s game. Keep reading for more on Mike Davis and whether you should start him in the Thursday Night Football matchup vs. the Falcons.

Panthers without Christan McCaffrey in fantasy

Before getting injured in Week 2, Christian McCaffrey’s fantasy production was just what his fantasy managers wanted when they took him early in their drafts. He scored 28.5 PPR points in Week 1 and 24.8 PPR points in Week 2 before leaving with the ankle injury that’s kept him out the last six weeks. In his place, Mike Davis came in and finished with 15.5 PPR points thanks to eight catches for 74 yards.

In the three weeks that followed, Davis put up steady RB1 numbers in PPR formats: 23.1, 22.1, and 29.9. Davis struggled after that, only registering 11.5 PPR points in Week 6 and 8.6 in Week 7. You could argue that Davis was starting to feel the pressure of the position and wearing down, or perhaps the team faced stiffer opponents that had them go away from the RB position. In the three games where Davis did well, the Panthers won. In the two where he struggled, so did the team, as they lost both. As Davis went, so did the team, or at least that’s what it looks like on paper.

However, this tells me that the Panthers’ identity almost entirely flows through the running back position. Without a solid RB performance, the Panthers tend to struggle. While the two losses were against better defenses in Chicago and New Orleans, respectively, it clearly looks like the team isn’t themselves without a strong running back to lean on.

So if McCaffrey is designated to play on Thursday Night Football against the Falcons, should you start him in your lineups?

Playing either Panthers RB is risky on Thursday

On paper, the 1-6 Atlanta Falcons look like a pretty easy matchup for the 3-4 Carolina Panthers. The Panthers beat the Falcons 23-16 in Atlanta in Week 5 without McCaffrey and are favored by 2.5 in Vegas. The Falcons are also becoming masters at snatching defeat from the jaws of victory as of late, losing close game after close game. This week, with the matchup being a home game for the Panthers and in prime time, all signs point to a Panthers victory, and that’s without McCaffrey being a sure thing to start.

And now, rumors are swirling that the team won’t activate McCaffrey for Thursday’s game. Ian Rapoport reports that he’s “considered a long-shot to play,” which isn’t surprising. But even if he does play, should Christian McCaffrey be trusted for fantasy managers?

I’m not so sure. Ankle injuries can be especially difficult to fully recover from, especially for running backs. On top of that, Mike Davis is still available to play, and he’s proven to be fairly reliable on his own. Do the Panthers need to risk their future for a single game that they’re favored to win without McCaffrey?

On the flip side, can Mike Davis be trusted in fantasy this week? Well, I’d say that it depends. With McCaffrey not active, Davis should be a solid start, but he isn’t necessarily a lock for a top-10 performance based on volume alone. While Davis did well in the last game against the Falcons, Atlanta has been somewhat stingy to opposing running backs overall, ranking 26th in Defense Points Against Consistency Score (DPAC) to the position. If Davis gets the start, he should have plenty of chances to get into the end zone, but temper your expectations. He might be in for a tough night if he’s on his own.

If McCaffrey is indeed activated, Davis’ upside obviously takes a hit. Davis is still likely to get some work in a timeshare as his teammate gets up to speed, but neither are locked in as RB1 options for fantasy if both are playing. With that in mind, I’m still starting either Panthers RB if both are active on Thursday night; I’m just not expecting 30 point games from either.

Looking ahead, however, provides some additional clarity. Yes, Davis has done well with the job, but this is clearly McCaffrey’s backfield. It wouldn’t be shocking to see Davis get some use here and there while McCaffrey eases his way back in given his recent performance in McCaffrey’s absence.

Within a few weeks, though, McCaffrey should once again take over as the lead back for this team, and potentially the lead back in the NFL. Starting in Week 9, Mike Davis’ fantasy value will take a hit, but Christian McCaffrey’s fantasy value should go right back to where it belongs: to the top of the list.

In this article:Christian McCaffrey, mike davis