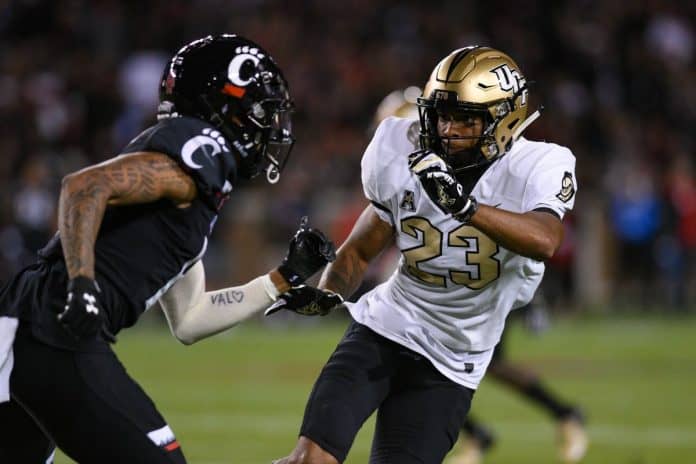 It still remains to be seen if the American Athletic Conference will have a season in 2020, but if it does, cornerback Tay Gowan has a chance to distinguish himself as one of the league's best. Andrew DiCecco has more on the former JUCO standout.

While the state of the college football season remains in flux, one of the conferences that has yet to back out of the 2020 season is the American Athletic Conference. The conference, which offers a bevy of tantalizing next-level prospects, also happens to boast one of the most decorated secondaries in college football. While the UCF Knights feature an alluring quartet of back end talent, redshirt senior cornerback Tay Gowan has the inherent intangibles to become the latest Knights defender to emerge on the national level.

After multiple seasons of inactivity at Miami University, Gowan transferred to Butler Community College in Kansas in pursuit of playing time. Determined to prove that he could produce for a Power Five program, the slender two-star cornerback from Newton utilized his new platform as a springboard toward college football relevance.

In 2018, Gowan collected 27 tackles (two for loss), four pass breakups and six interceptions — returning one for a touchdown. His stellar play on the back end helped propel Butler to a Midwest Classic Bowl win and earned Gowan the distinction of a first-team All-Kansas Jayhawk Community College Conference selection.

The ninth-ranked junior college cornerback, according to ESPN, Gowan was courted by SMU, Georgia State, and UCF, among other programs. Following an official visit to Central Florida in December, Gowan committed to the ascending program.

Although Gowan’s wiry build — 6-foot-2, 170 pounds — was sufficient enough to perform at a high level among the junior college ranks, he would undoubtedly find himself at a distinct disadvantage matching up against Division I talent. Fully committed to an arduous weight room and conditioning regimen in the offseason, Gowan added over 10 pounds to his frame by the start of his redshirt junior campaign.

Proving his diligence and as a student of the game, Gowan managed to dissect the playbook in time to serve as a prominent role player in the Knights’ season opener against Florida A&M University. However, following a season-ending injury to starting cornerback Brandon Moore in the one-sided affair, Gowan’s rapid development suddenly became paramount.

While the 2020 college football season currently hangs in the balance, the American Athletic Conference has yet to announce their plans. As it stands right now, the conference is expected to move forward with its 2020 plans. That said, there are few next-level caliber defenders in the AAC that can help themselves more with a standout 2020 campaign than Tay Gowan.

Miring in obscurity among the JUCO ranks two seasons ago, Gowan enters his redshirt senior season as a starting cornerback on one of the most formidable secondaries in college football.

Richie Grant and Antwan Collier comprise an enticingly diverse safety tandem, while Alabama transfer Aaron Robinson has thrived as a nickel defender. That leaves all eyes on Gowan, a lengthy cornerback with terrific ball skills and plenty of long speed battling on an island. The intriguing prospect figures to draw the opposition’s top target each week. How Gowan fares against Memphis wide receiver Damonte Coxie, one of the nation’s premier pass-catchers, will go a long way in configuring his draft stock.

For Gowan, who made remarkable strides in merely a year, the sky is the limit. The 2019 season offered a glimpse of Gowan’s potential as a standout cover man, but make no mistake, the redshirt senior is just scratching the surface of his capabilities.