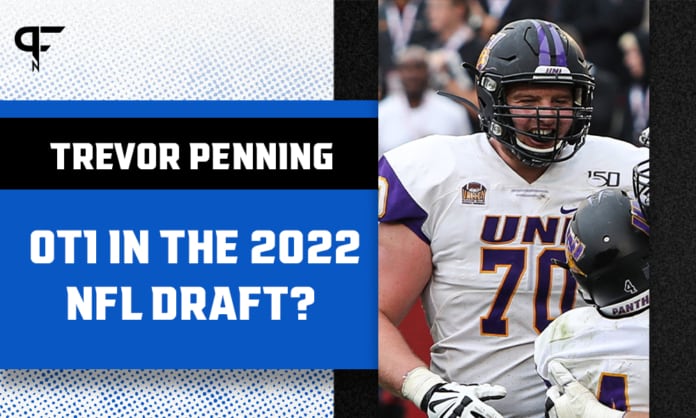 Can Northern Iowa offensive tackle Trevor Penning be the first tackle off the board? According to Tony Pauline, it's not out of the question.

Alabama’s Evan Neal is widely viewed as the top offensive lineman in the 2022 NFL Draft. But could Northern Iowa offensive tackle Trevor Penning be a sleeper in that discussion? It’s early, but Penning has impressed in his limited opportunities thus far, and one scout already has him at the top of the positional board.

Can Northern Iowa OT Trevor Penning be OT1 in the 2022 NFL Draft?

The 2022 NFL Draft’s offensive tackle class is relatively ambiguous to this point, but one thing we can all agree on is Neal being the best tackle — or so we thought. While Neal has the most hype, Penning is surging up boards, and he already has early-round buzz as October nears.

In a recent episode of Pro Football Network’s Between the Hashes podcast, PFN Chief NFL Draft Analyst and NFL Insider Tony Pauline spoke about Penning and his stock. According to Pauline, Penning could be the top senior tackle drafted. And in some circles, he’s viewed as the top tackle overall.

“Last week, we talked about Trevor Penning, the offensive lineman from Northern Iowa, who had a terrific game against Iowa State. I had mentioned that people think he could be the first senior tackle — if not drafted — at least going into the draft. He will be the highest-rated tackle.

“A very good source in the scouting community who I speak with all the time said he believes Penning will be the first tackle drafted. And when I said ‘you think he’s going to be drafted over Evan Neal of Alabama?’, the answer was ‘yes’. Penning is really well-liked in scouting circles.”

Is the excitement around Trevor Penning warranted?

Like Pauline, I’m not sure I’d have Penning in the conversation with Neal right now. But when evaluators around the league have this kind of opinion, it’s something you have to take into account. It’s not like Northern Iowa is a stranger to draft production, either. In the 2021 NFL Draft, the Buffalo Bills selected Northern Iowa OT Spencer Brown with the 93rd overall pick in Round 3.

Brown benefited immensely from offseason developments in 2021. The Lenox, Iowa product flashed at the Reese’s Senior Bowl in January. He also tested among the most athletic offensive tackles in recorded history with a Relative Athletic Score of 10. He was already a known NFL prospect coming out of Cedar Rapids, but he inflated his stock greatly in the spring months. Penning should have the same opportunity.

Like Brown before him, Penning could find himself in Mobile, Alabama next January. The Northern Iowa OT is on the Senior Bowl watch list and improved his stock with a standout performance against Iowa State edge rusher Will McDonald IV. Additionally, Penning is expected to test very well athletically. Before the season, Bruce Feldman named Penning to his Freaks list. He reportedly stands around 6’7″, 340 pounds, and he’s anticipated to run a 40-yard dash near the 5.0 range.

If Penning tests with those numbers and plays well at the Senior Bowl, it’s not brash to think he could at least be a Day 2 pick like Brown — if not even higher.

His career as a Northern Iowa offensive tackle

Penning began his football career at Newman Catholic High School in Clear Lake, Iowa. A team captain and a first-team All-District selection, Penning quickly stood out on Northern Iowa’s recruiting board. He came to the Panthers under 250 pounds. Since then, however, he’s worked his way up to the mid-300s. And he’s morphed into a mauler on the offensive line.

Penning first enrolled with the Panthers in 2017 and redshirted his first season. He played in four games as a reserve in 2018. Yet, 2019 was Penning’s first year as a starter. He started all 15 games opposite Brown and helped direct a playoff-caliber offense. In 2020, COVID-19 delayed the FCS season until the spring. Nevertheless, Penning started five games at left tackle and one game at right tackle.

Now, Brown is gone. But the Panthers’ offensive line is still a vaunted unit, in large part due to Penning’s presence. The Northern Iowa offensive tackle is making a name for himself. And next spring, he could be one of the first OTs off the board.