Can Jimmy Garoppolo still be a valuable starting QB in the NFL?

By Lucas Ellinas
March 31, 2021
Jump around this article Click to show
Injuries have plagued Jimmy Garoppolo’s time with the 49ers
Using advanced metrics to gauge Garoppolo’s time in San Francisco better
What should the 49ers do with Garoppolo?
Want more NFL news and analysis?

On Friday, the San Francisco 49ers traded up from the No. 12 overall pick in the 2021 NFL Draft to the No. 3 overall pick. Most believe that the 49ers made this move with the intention of selecting one of the draft’s top quarterback prospects. If that assumption is accurate, it casts the status of incumbent starter Jimmy Garoppolo into doubt. As such, it’s worth looking back at Garoppolo’s time in San Francisco to see if he can still have value to an offense.

Injuries have plagued Jimmy Garoppolo’s time with the 49ers

When he has been healthy, San Francisco’s decision to trade for Garoppolo back in 2017 has looked like a clear success. Garoppolo won his first five starts in 2017 after being traded, and in 2019, he led the 49ers to a 13-3 record and a Super Bowl berth.

That season might not have ended the way the 49ers wanted, but if losing in the Super Bowl means your entire year was a disappointment, then you’ve set some high standards.

Garoppolo’s statistics from that season were also reasonably impressive, totaling 3,978 yards, 27 touchdowns, and 13 interceptions through the air. Unfortunately, injuries have meant that most of Garoppolo’s seasons haven’t gone quite so well. He only played in nine games between the 2018 and 2020 seasons. As a result, he totaled more yards and touchdowns during his 2019 season than in his other three seasons with the 49ers combined.

Garoppolo’s inconsistent availability makes it difficult to properly evaluate his level of play based solely on his box score statistics. Indeed, we need to use a different method to paint a complete picture of his performance over the last few years.

Since the traditional statistics are somewhat incomplete in Garoppolo’s case, let’s turn to the Offensive Value Metric (OVM), a grading system created by the (Bx) Movement to measure players based on how valuable they were to their offenses.

Garoppolo’s OVM grades are something of a mixed bag. His best grade comes from 2017, when he put together five stellar starts for a grade of 27.32. That grade ranked sixth among all qualifying quarterbacks that season. Things went wrong quickly, however, as Garoppolo tore his ACL in Week 3 the following season and failed to play enough snaps to earn a grade.

Then, in 2020, Garoppolo struggled with injuries once again, suffering ankle injuries in Weeks 2 and 8. And while he played enough to earn a grade (16.07), it was easily the worst of his career and the second-worst in the NFL last season, only ranking above Dwayne Haskins. These grades show us that, when he can avoid injury, Garoppolo played well, contributing to his team at an average to above-average level. Unfortunately, that hasn’t happened nearly as often as San Francisco would have hoped.

It’s easy to see why Garoppolo’s overall grade fell so dramatically in 2020 when we look at how he performed on the metrics involved in calculating a quarterback’s OVM grade. In the chart below, you can see Garoppolo’s performance on the following statistics in 2017, 2018, and 2020:

As you can see, Garoppolo threw the ball shorter downfield in each consecutive season. He also threw into tight windows significantly less in 2020 than in his previous two years. In addition, 2020 was the first season in which he completed a lower percentage of his passes than expected, and he did so by a significant margin.

In short, Garoppolo attempted easier passes on average in 2020 but became a less efficient player, completing fewer of those passes than he should have — a big change from previous seasons.

Of course, a season-long grade doesn’t always provide the most nuanced depiction of how a player performed. As such, we need to look at Garoppolo’s weekly OVM grades. Below, you can see a series of charts displaying Garoppolo’s grades from each week of the last three seasons, represented by the black dots. For comparison, the league average OVM grade for quarterbacks during each regular season is represented by the yellow lines. 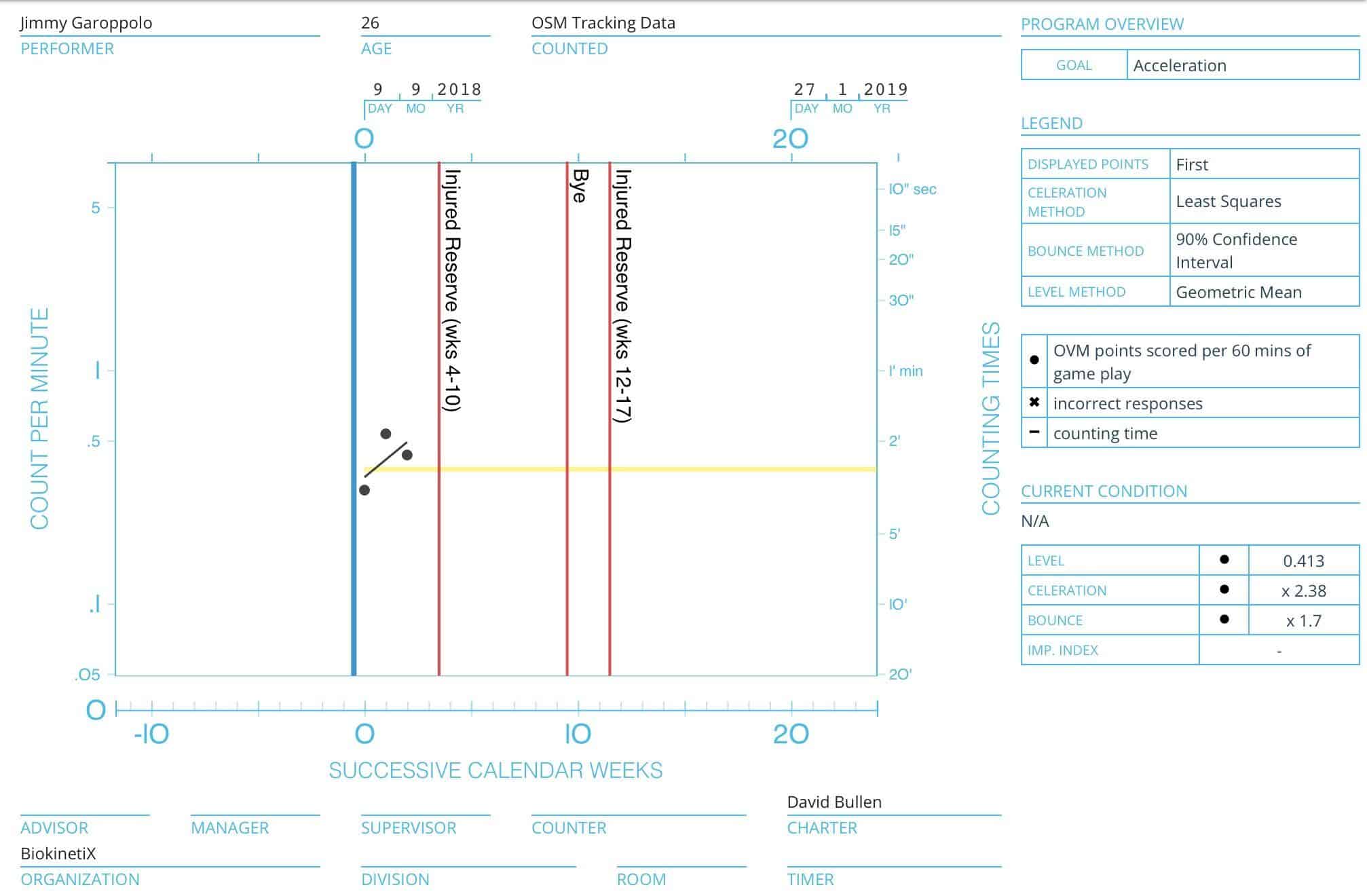 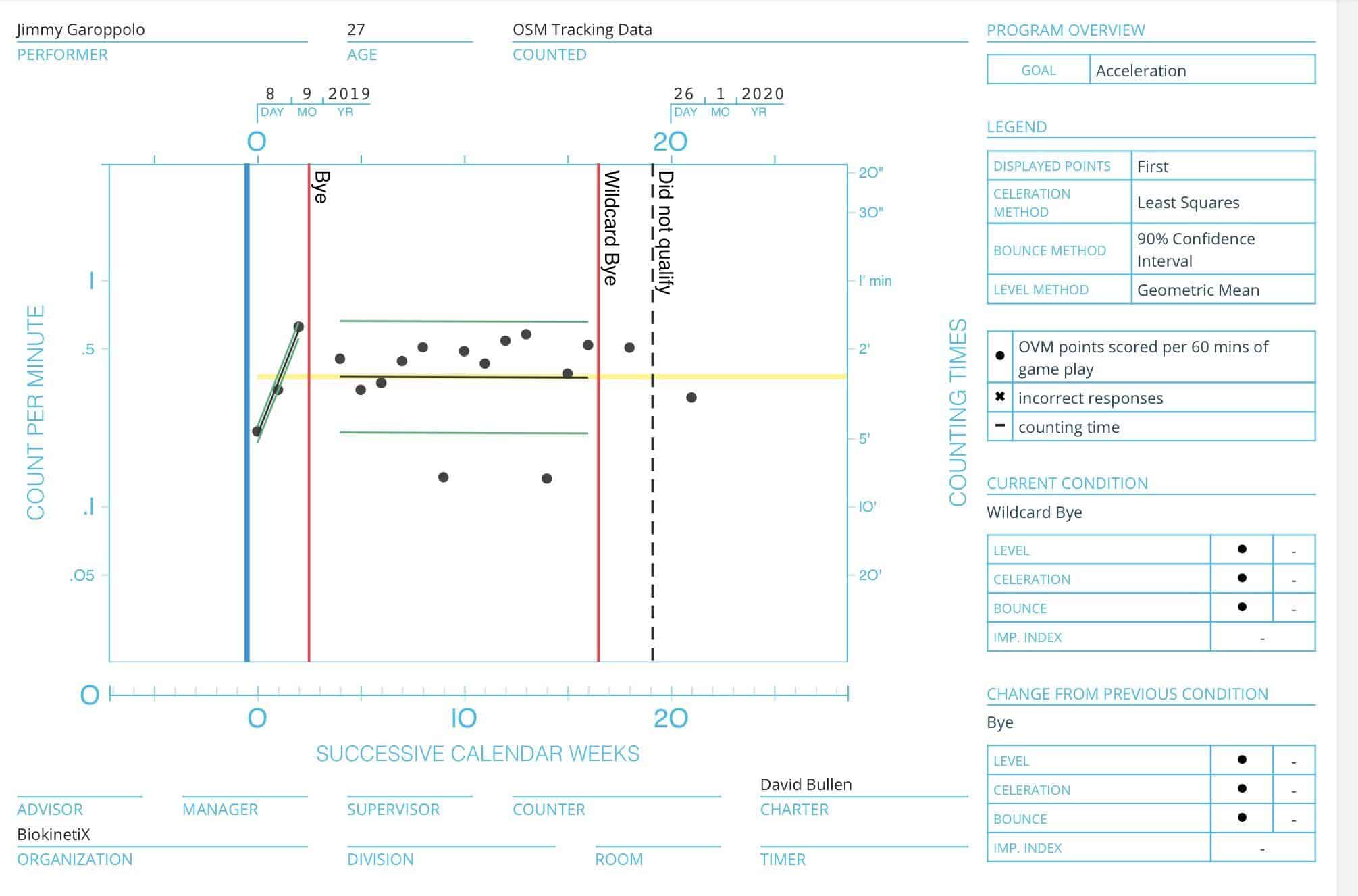 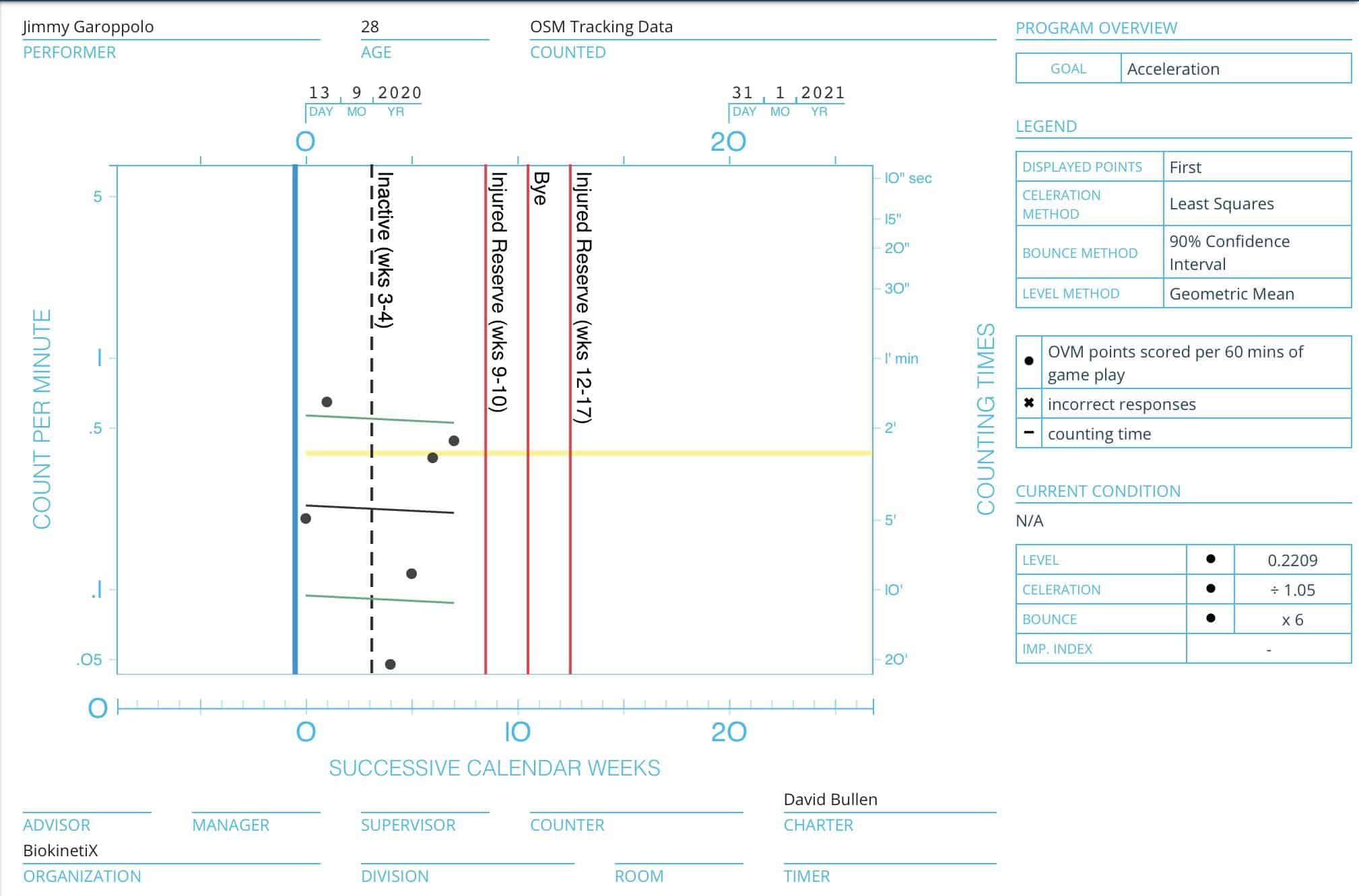 Garoppolo’s 2018 grades don’t tell us much since he only played in three games before being placed on injured reserve. He seemed to be performing at an above-average level overall. Nevertheless, it’s impossible to say how the rest of his season would have gone.

We can learn more from 2019, when the vast majority of his grades ranked above the league average. In fact, his overall grade would be much higher were it not for a few off games scattered throughout the season. It’s certainly unfortunate that one of those came in the Super Bowl. However, for the most part, Garoppolo was an extremely positive influence on the 49ers offense in 2019.

Featured | Kyle Shanahan’s QBs come in all shapes and sizes

Last season is perhaps the most interesting of the three. During the few games he played, Garoppolo was incredibly inconsistent, leading to his low overall grade. On the other hand, it seems likely that his injuries affected his play a great deal. His two worst grades of the season (and his career) came immediately after his return from injury in Week 5.

It is quite possible that he came back too soon and that playing on a still-injured ankle hampered his ability to contribute, especially since his play improved dramatically in the two weeks before his second injury.

What should the 49ers do with Garoppolo?

Garoppolo’s statistics during his time in San Francisco suggest that, if he can stay healthy, he still has the potential to be a solid quarterback. If the 49ers are looking to cut him loose, a quarterback-needy team that can’t afford to wait for a rookie to develop should definitely consider him as an option. However, even if San Francisco wants to get rid of Garoppolo, doing so might not be so simple.

Garoppolo’s contract creates numerous problems for any team looking to trade for the veteran. As things stand, Garoppolo is owed 53.4 million dollars over the next two years. Teams will likely be hesitant to take on that contract given Garoppolo’s inconsistent play over the last few seasons. Any potential trade would probably require Garoppolo to restructure his contract.

On top of that, Garoppolo’s contract includes a no-trade clause, adding another complication to the situation.

What to do if no trade partner materializes

If finding a trade partner proves impossible, San Francisco could always cut Garoppolo. There isn’t any guaranteed money left on his contract, so the move would leave them with just 2.8 million in dead money.

It would also give any team that might have wanted to trade for Garoppolo but were scared off by his contract the opportunity to sign him at a reduced rate. If no one is willing to take on Garoppolo’s contract, this option feels like an easy out for the 49ers.

At the same time, one could argue for keeping Garoppolo around. If the rookie quarterback from the 2021 NFL Draft is especially raw, they could sit and learn behind the veteran. Garoppolo is extremely expensive for a bridge quarterback, but the move might make sense if the rookie truly isn’t ready to start Day 1.

Whatever the 49ers decide to do, it seems as though Garoppolo won’t last much longer in San Francisco. However, his statistics suggest that he shouldn’t be done as an NFL starter quite yet.