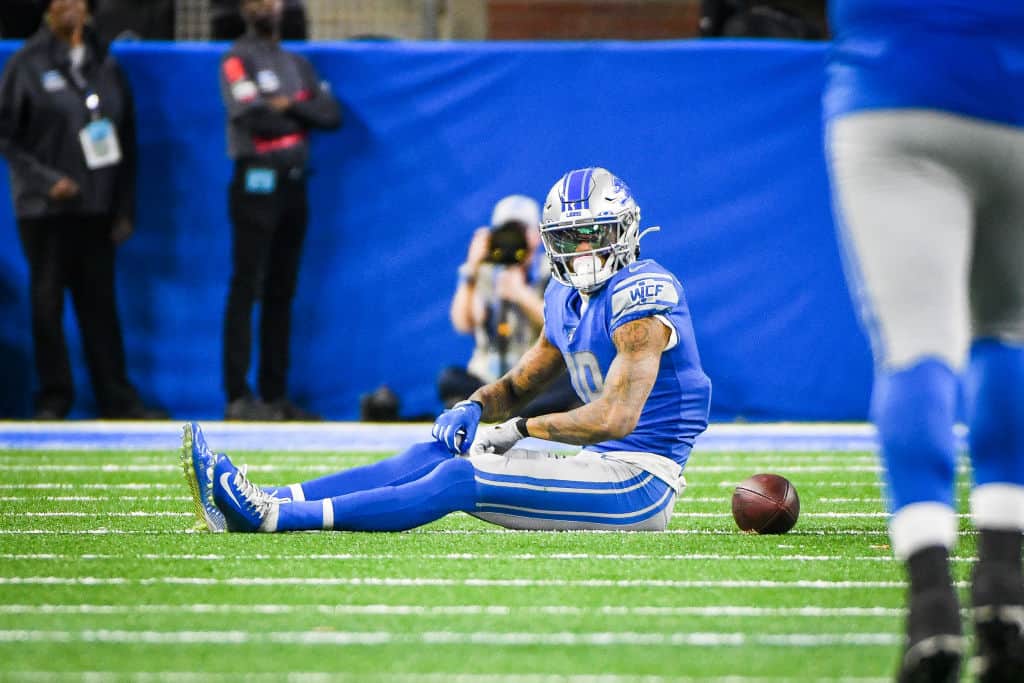 Depending on the type of fantasy league you’re in, wide receivers can be some of the most impactful players on your fantasy football roster. With PPR leagues being a popular choice among fantasy players, having several reliable and healthy wide receivers is a necessity to win games each week. We have you covered with our Week 11 injury updates as the season moves past the halfway point. Luckily, in Week 10, the wide receiver injuries were few and far between, but players such as Kenny Golladay and Calvin Ridley could impact fantasy rosters for Week 11, so stay up to date with our fantasy injury report.

Make sure to check out our Week 11 RB injury updates, as well as some other key injuries for fantasy football.

Every week in the NFL, players go home with bumps and bruises. However, there are some large questions that loom over the fantasy football landscape that need to be addressed for Week 11. Some of those questions include players like John Brown, Calvin Ridley, Deebo Samuel, Allen Lazard, and Kenny Golladay in the fantasy injury report for Week 11. Below are their injury status as well as more updates on other wide receivers around the league — those updates are sorted by conference.

Will John Brown be available to play after the Bills’ bye week?

Tuesday, November 17: John Brown had been trending upwards on fantasy rosters as of late, but he suffered an ankle injury late in the game against the Arizona Cardinals and was not able to finish the game. Depending on the severity of his ankle injury, Brown could miss some time, even with the Buffalo Bills having a bye week during Week 11.

Related | NFL Power Rankings, Week 11: A shakeup of teams in the top 20

The severity of his injury is still unknown, but he will have a decent amount of time to rehab the injury and play in Week 12. Coach Sean McDermott said Monday that Brown tweaked his ankle during Sunday’s 32-30 loss to the Cardinals, Maddy Glab of the Bills’ official site reports. However, if Brown is unable to go, his teammate Cole Beasley is a possible replacement to consider.

Will Calvin Ridley play in Week 11?

Thursday, November 19: Ridley (foot) was a limited participant in Thursday’s practice, Will McFadden of the Falcons’ official site reports.

Tuesday, November 17: After missing the Atlanta Falcons’ Week 9 game against the Denver Broncos with a foot injury and resting throughout their Week 10 bye, Calvin Ridley should be able to go in Week 11 for Atlanta. Ridley got work in with trainers on the side at Monday’s practice, Jason Butt of The Atlanta Journal-Constitution reports. Interim head coach Raheem Morris said that he’d have a better idea of Ridley’s availability for Week 11 on Wednesday when the third-year wideout will be scheduled to get in some individual work. Julio Jones had a big game against the Broncos, so Ridley’s rest day appeared to be worth it. We will keep you updated on his status going into their game against the New Orleans Saints.

What is Deebo Samuel’s injury status?

Tuesday, November 17: Deebo Samuel was inactive for the 49ers game against the Saints in Week 10 due to a hamstring injury. Samuel has been dealing with injuries since the preseason and has taken quite a bit of time to get back onto the field. Luckily for Samuel, the San Francisco 49ers will have a bye during Week 11, which should allow him to return to action against the division-rival Los Angeles Rams in Week 12. The 49ers will need Samuel to give their offense a boost, and fantasy owners need to see him off the injury report, so stay tuned with our Week 11 injury updates for Samuel.

After being inactive in Week 10, could Allen Lazard return?

Tuesday, November 17: Dealing with a core muscle injury, Allen Lazard was held out of the Packers’ Week 10 matchup against the Jaguars due to soreness. With a matchup against the Colts looming in Week 11, the Packers will need all the help they can get from their receiving corps, and fantasy owners would like to see Lazard back on the field as another possible receiving option for their lineup. Lazard has been effective when targeted by Aaron Rodgers, hauling in 13 catches on 17 targets, so keep an eye out for his injury report updates during Week 11.

With injuries building up, could Kenny Golladay return to action?

Thursday, November 19: The Lions listed Golladay (hip) as a non-participant in Thursday’s practice.

Tuesday, November 17: After Danny Amendola suffered an injury in the Lions’ Week 10 win against Washington, Detroit’s options in the receiver room are shrinking rapidly. Kenny Golladay was held out of the Week 10 contest with a hip injury and was sidelined during all of last week’s practices. With the injuries to the other Lions receivers, Golladay’s presence will be needed for the Lions’ offense and for his fantasy owners, so make sure you keep an eye on his Week 11 injury report when considering your fantasy lineups.

Wednesday, November 18: Humphries did not practice on Wednesday.

Tuesday, November 17: Head coach Mike Vrabel said Monday that Humphries is still in the concussion protocol, Jim Wyatt of the Titans’ official site reports. Humphries couldn’t suit up for last Thursday’s loss to the Colts, and he still hasn’t been cleared to retake the field.

Thursday, November 19: Stills (back) returned to a limited practice Thursday.

Tuesday, November 17: Jacksonville Jaguars head coach Doug Marrone said that rookie wide receiver Laviska Shenault Jr. (hamstring) will return to practice this week, but the team will “wait and see” if he’s ready to play in Week 11 against the undefeated Steelers.

Tuesday, November 17: The Kansas City Chiefs have been without Sammy Watkins since he suffered a hamstring injury in Week 5, but he could be set to return following their Week 10 bye. With the team not taking the field this week, it should give the talented WR enough time to get healthy.

Tuesday, November 17: New Orleans Saints wide receiver Tre’Quan Smith walked back to the locker room after a tough hit in Week 10. He was ruled out of the rest of the game with a concussion.

Thursday, November 19: Tyler Lockett is active and will play against the Cardinals on Thursday Night Football.

Wednesday, November 18: Coach Pete Carroll said Lockett, who is listed as questionable for Thursday’s game against the Cardinals, is expected to play, per Adam Schefter of ESPN.