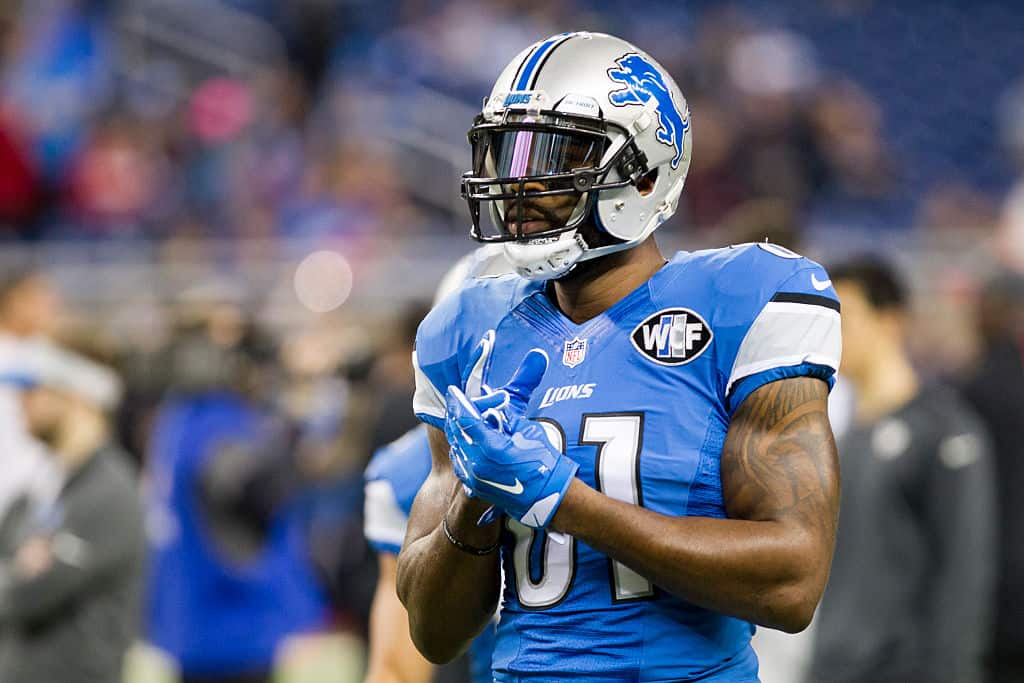 Ten would-be Pro Football Hall of Famers are about to be SNUBBED! Peyton Manning sure as heck won’t be one of the Hall of Fame finalists to be snubbed during the voting process. Charles Woodson almost certainly will not be one, either. Yet, someone highly deserving — Tony Boselli, LeRoy Butler, John Lynch, Torry Holt, Reggie Wayne, Zach Thomas, or maybe even Calvin Johnson — will be among the Hall of Fame “snubs.”

Context of this year’s Hall of Fame voting

And there is nothing the Hall of Fame voting selection committee can do about it. It’s their job to whittle a ballot of 15 highly-qualified Hall of Fame finalists down to a list of five (and only five) inductees.

The selection committee is meeting soon. Very, very soon. Sooner than you think. So I asked some of the selectors for their opinions before the vote. All of them must remain anonymous, of course. This isn’t the Baseball Hall of Fame vote, where everybody gets to write a beard-stroking/pearl-clutching column about why they will never vote for Slugger McSteroids.

Some of these selectors talk to many ex-players and coaches before making their decisions. Most do in-depth research on each candidate. None of them wants to “SNUB” anyone or hates your favorite team. All of them are trying to evaluate players at different positions in different eras, some of whom have been waiting years or decades for a decision.

If you think that’s easy, try picking only five players from this year’s field. Then imagine how you would explain yourself to fans of the other ten.

All voters agree that there will be no discussion for Manning and little more than a brief presentation for Woodson. Both will be inducted into the Hall of Fame once the voting is complete.

“The only thing about Calvin Johnson is the length of his career. But if you talk about a guy who played nine years in a time when everybody’s throwing the ball, and he is so dominant and has three incredible seasons right in a row, he should be almost as much of a slam dunk as Woodson.”

“To me, there really shouldn’t be a debate about Calvin Johnson getting into the Hall of Fame, though I know some people feel differently. My guess is he gets in on the first ballot.”

“I do think he’s a Hall of Famer, and in a lot of years, he would be the first-ballot Hall of Famer. It gets complicated when you have Manning and Woodson there because he’s not quite on their level. I think his case needs to be made. The eye test says ‘first ballot.’ But the achievements?”

“It’s not his fault that he got caught playing for the Lions, but he didn’t overcome it, either. He’s a stat monster. He’s a fantasy football dream. But there’s something about him that says, ‘you had better convince me because we have been making guys like Alan Faneca and Tony Boselli and John Lynch wait for a long time. I’m not gonna rubber stamp Calvin Johnson into the Hall of Fame when we have been torturing John Lynch.”

“I think Calvin Johnson can wait. I’m not saying that he’s not going to get in, but I don’t think he’s a slam-dunk guy.”

“Look at what Holt and Wayne did in their first nine years — which is how long Johnson played. Holt actually has more yards and more receptions. Not by a lot, but he has more. He has less touchdowns, but of course, Calvin Johnson was the only guy in Detroit scoring touchdowns. And Wayne is well below the others.”

“I think Zach Thomas is worthy, and so is Clay Matthews. I like both a little more than Sam Mills, but I would vote for all three of them if they were in the final five. It’s close, but I support Thomas more than the other two. He was such a complete player. He was a junkyard dog. An underappreciated overachiever who came into the game as a fifth-round pick. A huge factor in every Dolphins’ game I covered. I voted for Jason Taylor, but in my opinion, Thomas was a better overall player than Taylor.”

“It was nice to see Clay Matthews finally get in the room in his final year of eligibility, but he’s a long shot, kind of like [Dallas Cowboys and New York Giants cornerback of the 1980s] Everson Walls was a couple of years ago.”

“I keep going back to the fact that he played 19 years and wasn’t All-Pro once. He was only second-team once. While Zach Thomas was All-Pro four times in a conference that also had Ray Lewis.”

“Some quarterbacks and coaches who coached against him that I have talked to think very highly of him. But ex-players and coaches who were more blood ‘n’ guts types, they tend to poo-poo Zach Thomas. I think he will make the top 10, but the way the vote is likely to fall, it will be hard for him to get in.”

“Sam Mills would beat your ass. And when he was in the Dome Patrol, holy f**k. I wasn’t playing, but I was still scared. But in the past, we would have four or five people who spoke for Mills and did a nice job, and then the conversation just went silent. Nobody had anything bad to say about Mills, but the ballot was just too crowded for him.”

“I’ve been pushing Mills for the last 7-8 years, and this is his second year in the finals. He was eliminated in the 15-to-10 vote last year. I feel strongly that he belongs in the Hall of Fame.”

“Sam Mills has got a lot of support in the room. But Zach Thomas is taking just enough votes away from him to prevent him from getting in. Thomas was a terrific linebacker, but he couldn’t carry Sam’s jock. That said, they’ll likely cancel each other out for the second straight year.”

“I don’t know if any of these guys when they were playing had a lot of people saying ‘Man, this guy’s a surefire Hall of Famer,’ as good as they were. But as you look at their careers, they’re deserving. But I don’t know how you separate them.”

“Boselli played 11 more games than Terrell Davis. And I would argue that Boselli was a better player at his position than Davis was at his position. Boselli was nearly a singular tackle when he was healthy. It kind of bothers me that Boselli is almost left to fend for himself because I would guess that Faneca has a better chance to make it. Some line coaches say Boselli was as impactful as [former Cincinnati Bengals’ great] Anthony Munoz in the time he played. But I think this is going to be a Faneca year, not a Boselli year.”

“I just think it’s a matter of time before Faneca gets in. And he’s absolutely a Hall of Famer.”

“Of all the previous finalists, I think Alan Faneca probably is the most sure thing. What are we waiting for with him?”

“There is no doubt in my mind that either Boselli or Faneca will get in. Will both of them get in? Maybe. I feel Boselli was the superior player, but the length of career does count.”

“There’s no questioning his ability. If he had been healthy and played a long time, he would’ve been a first-ballot guy probably. But I have the same objection I’ve always had with him. The same objection I had with Terrell Davis. They didn’t play long enough. But I’ve got a feeling a lot of people who have had the same objection to Boselli are going to give in this year and vote for him.”

“I thought Faneca should’ve gone in long ago. Every year, he’s the best offensive lineman in the finals, and every year he gets snubbed. Probably will happen again, and I don’t know why. The presentations for him have been terrific, and there’s never been anything negative said about him in the discussions. Then we vote and it’s bye-bye, Alan.”

“Safety is hard. There were 20 years where we paid short shrift to safeties, and in the last few years, it has come home to roost. I think Butler and John Lynch both deserve it. I would probably put Lynch over Butler even though the stats say that Butler did more overall in his career.”

“Steve Atwater passed John Lynch last year. There is some sentiment that LeRoy Butler could do it again, but I’d be surprised.”

“Butler has had some ardent fans, but I think he’s way behind Lynch in terms of support.”

“Lynch is an eight-time finalist, and there will be some passionate now-is-the-time-to-put-him-in speeches. But I don’t think that’s going to happen. He was a great Cover-2 safety, but the Hall of Fame? Nah. Not in my book.”

“I like Butler a lot. Like him a lot more than Lynch. But I don’t see him going in this year.”

“There’s a chance that some of the guys vote for Lynch just so we don’t have to talk about him anymore!”

Finalists unlikely to make it out of the first cut

Jared Allen, Ronde Barber, and Richard Seymour only received scant mentions among our voters. Not because they are undeserving, but because they are recent players whose cases take a lower priority in most voters’ minds than the players listed above.

Despite the skepticism noted above, I think Calvin Johnson will join Peyton Manning and Charles Woodson in this year’s Hall of Fame class. If he doesn’t, I will probably just delete Twitter from my phone and computer for a few days. After that, the “let’s just get John Lynch and Alan Faneca off the docket” sentiment seems strong, but it seemed strong when I spoke to other (sometimes different) voters in years past.

Keep in mind that the Hall of Fame voting committee first narrows the field down (via secret ballot) from 15 candidates to ten before taking a second vote to select the final five. That can lead to all sorts of scenarios.

There’s the possibility that Torry Holt and Reggie Wayne will cancel each other out in the first cut, then sending their biggest boosters to select other candidates. If only one of the linebackers clears the first cut, his chances of making the Hall of Fame increase. That’s what so many don’t understand about the Pro Football Hall of Fame voting balloting.

There’s a strong chance it won’t be about whether Player X is worthy or not. It’s more likely to be about whether he’s stuck behind Player Y (a previous finalist for six years) or splitting votes with Player Z (possibly his teammate for four years or a Pro Bowler in the same era).

Just about all we know for certain is that Peyton Manning will get waved in without a discussion.

Eli Manning, on the other hand, will be a different story in four years.