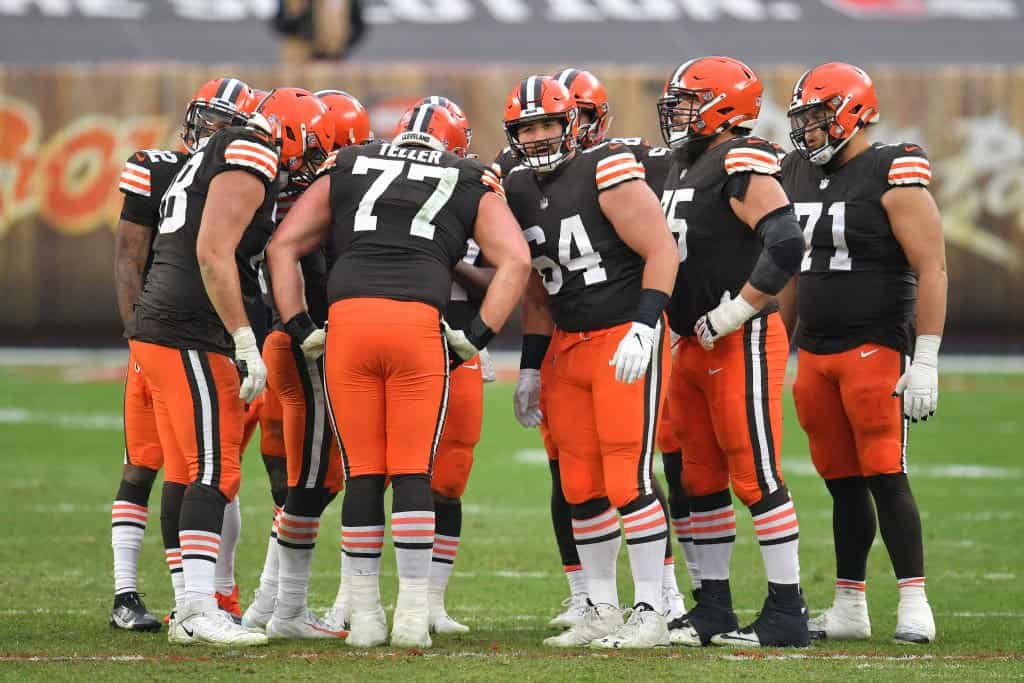 CLEVELAND, OHIO - JANUARY 03: Offensive guard Wyatt Teller #77 center JC Tretter #64 of the Cleveland Browns and the rest of the offense huddle prior to a play during the fourth quarter against the Pittsburgh Steelers at FirstEnergy Stadium on January 03, 2021 in Cleveland, Ohio. The Browns defeated the Steelers 24-22. (Photo by Jason Miller/Getty Images)
What's in this article? Click to show
Context of the Browns’ 2021 offseason
The Baker Mayfield extension situation
The Odell Beckham situation
Should the Browns pursue J.J. Watt?
The Cleveland Browns’ top offseason priority in 2021
Want more NFL news and analysis?

NFL Recap visits the Dawg Pound. What will the Cleveland Browns do this 2021 NFL offseason, and how do they manage the short-term/long-term prospects at WR and offensive line? Let’s dive in!

Context of the Browns’ 2021 offseason

The last time the Cleveland Browns were good enough to win a playoff game, free agency and the salary cap were new, the NFL had only begun to adjust to the new financial reality, and the league’s entire salary structure was different. So it’s safe to say that the Browns have never experienced an offseason like 2021.

To spend or not to spend?

The franchise is hoping to sustain and build upon real success for the first time since the days when we got our internet through our telephone landlines. With $22 million-ish in cap space entering free agency, Cleveland may be tempted to go on a mini spending spree.

Yet, while entering the Allen Robinson or J.J. Watt sweepstakes sounds like an appealing option, the Browns face looming decisions about Baker Mayfield, Odell Beckham Jr. and the WR group, and their suddenly star-studded offensive line. Successful teams build their budgets and free agency plans with one eye on the long-term future.

General manager Andrew Berry will have to build the same way. He’ll do so while making sure impetuous team owner Jimmy Haslam doesn’t pressure him into doing something rash.

Mayfield is entering the fourth year of his rookie contract. One of the Browns’ first (and easiest) orders of offseason business will be to pick up Mayfield’s fifth-year extension for 2022. The fifth-year option will cost the team about $20-$25 million. Extending the rookie contract will buy the Browns valuable evaluative time.

If you think Mayfield earned a nine-figure franchise quarterback contract due to his hot streak in the second half of the 2020 season, you have not been following the Jared Goff or Carson Wentz situations closely. Mayfield enjoyed his success in Kevin Stefanski’s offense, which is somewhat similar to the one which has hidden Goff’s weaknesses until the Los Angeles Rams grew impatient and traded for Matthew Stafford instead.

The timing quandary for a potential new contract for Mayfield

Mayfield’s streaky decision making and past emotional teacup rides mirror elements of the Philadelphia Eagles’ moody Wentz saga. The Browns don’t want to splurge for Mayfield too soon, then discover that he needs three offensive linemen playing at a Pro Bowl level to succeed and/or turns back into the guy who gets into internet beefs with reporters as soon as he encounters a little adversity.

One of the subplots of the 2021 offseason’s nationwide quarterback drama is that extensions are looming for the Browns and Mayfield, but also Josh Allen and Lamar Jackson in the AFC cohort. There’s a good chance that the Buffalo Bills (who are the most completely satisfied with their quarterback right now) will break the bank for Allen early, putting pressure on the Baltimore Ravens and Browns.

It’s generally wise to be the first one to dive into the pool when multiple semi-similar players are facing extensions. Still, the Browns are better off waiting a little longer and making sure about Mayfield than trying to save a little money by beating everyone else to the market.

The Browns WR caught just 23 passes before missing the playoff run with an ACL injury. His offseason timeline is unclear. Off the field, Beckham is about one-quarter the headache your father-in-law thinks he is. He is also about 25% more a headache than a veteran four full seasons removed from his last superlative season has any business being.

Beckham isn’t a bad guy at all, but he is flaky in a way organizations can live with as long as he’s providing double-digit touchdowns. Beckham carries a $15.7 million 2021 salary cap figure, but the Browns could cut the WR without penalties because the New York Giants were forced to eat all his prorated bonuses (LOL) upon trading him.

Cutting Beckham sounds tempting, especially to the Beckham haters, but the Browns desperately need a genuine deep threat at WR. If Beckham can reclaim his 2014-16 magic after bouncing back from ACL surgery in 2021, then he’s one of the best real deep threats in the league. And yes, a high level of skepticism was baked directly into that last sentence.

Where does Rashard Higgins factor into the Browns’ 2021 offseason plans?

Meanwhile, Rashard Higgins is an unrestricted free agent after emerging as one of Mayfield’s most reliable targets from the Week 13 win over the Tennessee Titans until the moment he got thwacked in the head reaching for a touchdown against the Kansas City Chiefs in the playoffs. Higgins may have earned his coaches’ and teammates’ trust. Yet, overpaying a sturdy role player like Higgins can be just as risky as waiting for Beckham’s resurrection.

The Browns should consider playing hardball with both WRs. Cleveland should offer an affordable hometown-distinct offer for Higgins and a restructure-or-else ultimatum for Beckham that turns some of his salary into incentives.

Either player might look at the 2021 free agent receiver market (and the league-wide belt-tightening) and play along. Otherwise, the Browns could replace Higgins through the draft and use their extra Beckham bucks on someone like Juju Smith-Schuster.

Should the Browns pursue J.J. Watt?

Sure, why not? Lots of teams should be pursuing Watt now that the Houston Texans released him. The Browns have made great strides in the last calendar year. Yet, Watt may still be wary of signing with an organization that was the NFL’s biggest circus from their 1999 rebirth until the day Jack Easterby erected his big tent in Houston. However, a defensive line featuring Watt and Myles Garrett would certainly be entertaining to watch.

Assuming Watt isn’t tempted by Cleveland’s delightful winter weather and the Browns’ rich tradition of excellence, the team would be wise to bargain hunt in a free agent class flooded with veteran edge rushers.

What other players or positions may the Browns turn to on defense?

A veteran like Leonard Floyd or Ryan Kerrigan could be available for a short, incentive-heavy deal once the cap-strapped NFL is done blowing its dough on bigger names. Alternately, the Browns could sign a younger, lesser-known defender like Romeo Okwara to a long-term deal.

The Browns also need more help at cornerback opposite Denzel Ward. This is especially true if Greedy Williams’ shoulder injury (which erased his 2020 season) continues to impact his career. There are huge names like Jason McCourty and Richard Sherman on the hypothetical market right now, but signing a 30-something cornerback is perilous, and the Browns would be better off spending their resources elsewhere.

Everything for the Browns starts with the offensive line. Wyatt Teller had a breakout season at right guard. Jack Conklin, J.C. Tretter, Joel Bitonio, and rookie Jedrick Wills all played at a high level. The Browns’ offensive line made the Browns run game and play-action offense work. This made Mayfield look like an All-Pro working within clean pockets and ahead of the sticks.

The Browns need to keep their offensive line intact if they hope to take the next step. Teller is entering the third year of a three-year deal. The Browns should invest a chunk of cap space to make him the highest-paid guard in the NFL.

Bitonio and Tretter are signed through 2022. The Browns can get creative with their contracts (add a year or two via extension, turn their 2021 base salaries into prorated bonuses) in ways that both reward the players and create cap space for 2021.

What other important players should the Browns keep an eye on beyond the offensive line?

Nick Chubb is also entering the final year of his contract. Overpaying a running back is never wise, but Chubb is a huge part of the Browns’ offense. By frontloading an extension with some of their 2021 cap surplus, the Browns can pay Chubb without creating a contract that they will regret in 2023.

Every Browns in-house extension or free agent re-signing should be aware of a possible Mayfield extension. The more cap space the Browns reserve for Mayfield in 2021 and 2022, the less likely they are to be in either a Wentz-like “we’ll pay you to tow this off our lawn” offseason situation if things go pear-shaped or a “gosh, we cannot afford to pay anyone but the quarterback” situation if things go well.

The Browns must be wary of the “one player away” mentality because they are not one player away. While a calculated free agent acquisition or two won’t hurt, the Browns’ top priority in the 2021 offseason will not be getting better at any one position but creating opportunities to continue their broad-based improvement at all positions.

Fortunately, the new brain trust got their jobs because the last set of decision-makers reacted to a 5-2 run at the end of the 2018 season as if they suddenly became the Lombardi Packers.

The 2021 Browns should concentrate on consolidating their gains instead of attempting another sudden leap. Their fans have been patient through 20+ years of mostly terrible teams. They’ll be patient for another year with a good one.