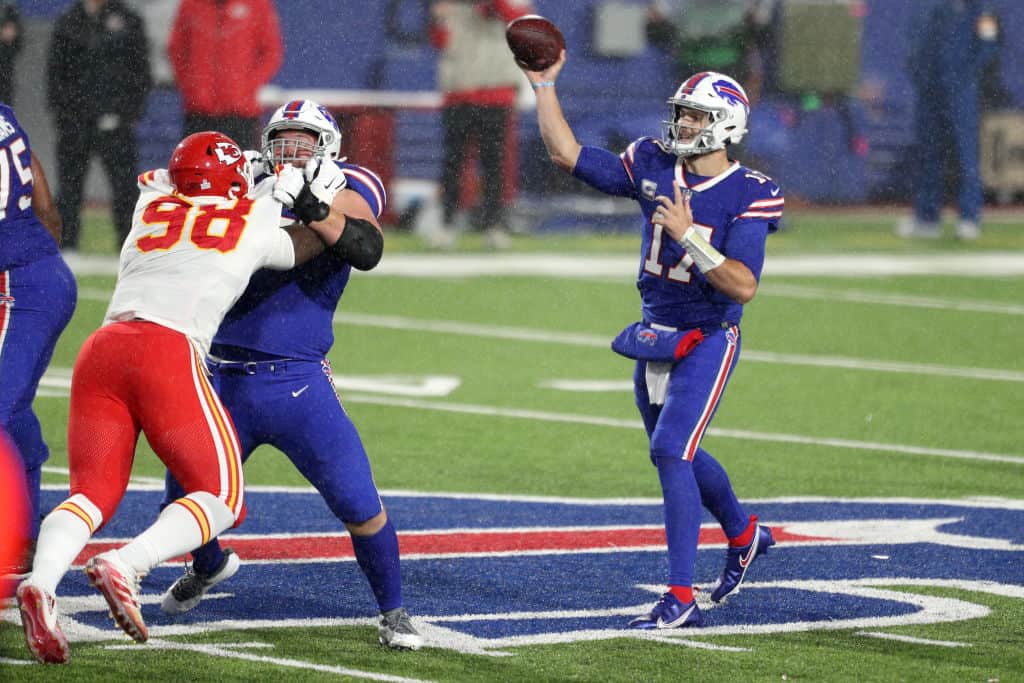 This AFC Championship Game features Kansas City Chiefs quarterback Patrick Mahomes defending the throne versus Josh Allen and the Buffalo Bills (spread favors Chiefs by 3). These are the two most explosive offenses this year, and one defense will get critical stops for the victory. This week, I will focus on the Bills versus Chiefs line prediction and determine which spread presents possible value. Make sure to keep up with all of the NFL betting team’s plays throughout the week.

Both teams enter this game riding high due to their performances over the last few weeks. The Chiefs are fielding an injured Mahomes working his way back from both concussion symptoms and turf toe. Before his concussion symptoms, the Chiefs were dismantling the Cleveland Browns and would have won by double digits. Their offense is as explosive as ever, and they are nearly perfect health-wise entering this game.

The Bills enter this game on an eight-game win streak averaging 34 points per game during that stretch. Over the last two weeks, the Bills have survived the Indianapolis Colts’ and Baltimore Ravens’ stout defenses. With the help of average performances by quarterbacks Philip Rivers and Lamar Jackson, the Bills have made their way to their first AFC Championship Game since 1993.

Related | NFL Playoff Picks, Predictions, & Best Bets Against the Spread for the Conference Championship Round

A three-point spread would usually indicate that this AFC Championship Game matchup between AFC powerhouses should be a tight one. With a championship-pedigree roster full of experience and home-field advantage, the Chiefs should have the edge in this game. However, considering that Josh Allen is in the middle of an MVP-esque season, the Bills are no slouch, and this Bills versus Chiefs line is as accurate as can be.

If you look at offensive yards per play differential, these two teams are essentially equal. The Chiefs average 6.3 yards per play, which is in the top three in the league this year. Compare that to 6.1 for the Bills, which is sixth-best in the NFL in 2020. However, that is just the tip of the iceberg.

The Chiefs possess a top-three wide receiver this season with the explosive Tyreek Hill. They also field arguably the best tight end in the game with Travis Kelce. Add in a young and formidable running back in Clyde Edwards-Helaire, and you have an offense that can beat you in many different ways.

Although it’s been a down year numbers-wise compared to his MVP season, Mahomes still registered a career-best quarterback rating this year and had more game-winning drives this year than any of his other three years. The Bills have their own elite quarterback in Allen, who has set career-best records in nearly every passing category possible.

Buffalo has a variety of weapons, with top-three wide receiver Stefon Diggs leading the way. The Bills are down one running back in Zack Moss but still have another capable ball carrier in Devin Singletary. They have Dawson Knox as their tight end threat, with receivers John Brown and Cole Beasley rounding out the bunch.

Although both teams have explosive and high-powered offenses, the Chiefs’ offensive weapons are significantly better and have more depth than the Bills. Due to this fact, the Chiefs are three-point favorites in this Bills versus Chiefs line, and the prediction is they will win the game.

The numbers indicate a close game this week

If you look further than offensive numbers, the teams look even more equal in quality. The Chiefs boast the overall better run defense while the Bills field the better secondary. Although this is a short three-point spread for the Bills versus Chiefs, this game could favor the Chiefs much more.

The Chiefs are the more efficient defense

Kansas City fields the better front seven with a 24.2 percent pressure rate – good for 11th in the NFL. On the other hand, the Bills come in with a paltry 21.1 percent rate, which ranks 11th-worst this season.

Could the offensive line be the difference in this game?

The trenches are undoubtedly a factor when focusing on a team’s ability to win a game. Both the Bills’ and Chiefs’ lines have performed admirably all year defending their respective quarterbacks. While the Chiefs have had to make do without their reliable right tackle Mitchell Schwartz, the offensive line has kept their heads above water this year.

The style that Mahomes plays the quarterback position can make the Chiefs’ pass protection look worse than it is. Mahomes led the league in quarterback pressures directly due to his own doing with 53 on the year.

The Bills focused on cheap offensive line help and took risks on players with tumultuous seasons. Starting right tackle Daryl Williams was signed to a minimal 2.25 million dollar contract and has performed admirably.

Bills quarterback Josh Allen plays similarly to Mahomes in the sense that they both create extra time with their elusiveness to allow their receivers to create separation down the field. Allen is specifically known for his ability to find receivers along the boundary right before they go out of bounds. What seems like typical throwaway passes become completions due to his elusiveness and his receivers’ ability to find holes.

This game will be a tightly fought battle as they compete for the chance to play in the Super Bowl. The Chiefs have significantly better weapons to instantly change a game if they can expose the Bills’ average defense. If they can continuously create separation for Hill and Kelce, expect the Chiefs’ offense to flourish and potentially force Allen into a game of catch up. This is a tough battle between the Bills and Chiefs to make a spread prediction.

The Chiefs lead should slowly increase throughout the game regardless if it is a low-scoring field goal driven game or one that turns into a shootout. The Bills’ porous run defense should allow Mahomes and Edwards-Helaire to make plenty of plays and open up things for the passing game more than they typically do.

Lean towards the better offense, the better placekicker, and the experienced and wise coaching staff with Andy Reid to cover this Chiefs versus Bills line for the AFC Championship Game.

As far as player props go, the ones I’m interested in are on the Buffalo side of the ball. Allen’s over passing attempts is the first one that sticks out to me. The Bills pass at over 60% in virtually every game situation. Even when they try to run, they aren’t good at it (21st in success rate according to Sharp Football Stats).

Whether they get out to an early lead or have to come from behind, the Bills will have ample passing volume. Allen has gone over 38.5 attempts seven times, with two of those being in a loss. I think he surpasses that plateau here.

As a result of liking Allen’s over pass attempts prop, I like Singletary’s under rushing yards (41.5) prop. He’ll need 10 attempts to hit the over, assuming his season-long average of 4.4 yards per carry holds. He’s hit that mark just once in their past six games. Even though Singletary is the lone wolf in the Bills’ backfield, I’m opting to bet against one of the worst rushing games in the league in favor of their passing attack.

Two more props I’m leaning towards are anytime touchdowns for Knox (+340) and Edwards-Helaire (+135). Gabriel Davis hasn’t practiced all week, which could lead to more playing time for Knox. As for Edwards-Helaire, if he’s healthy, he will be the featured back. He’s logged two limited practices this week and is trending towards playing on Sunday.

I also like Allen’s anytime touchdown prop at (+135) for these predictions for Bills vs. Chiefs. I expect him to be more aggressive with his legs in a “do or die” playoff game. His rushing yards prop price is efficient, but I like his odds to score a TD.

Follow Jessica @GridironAndWine and Pro Football Network @PFN365 on Twitter for all the best betting advice and NFL news for the rest of the 2020 NFL season and onward.