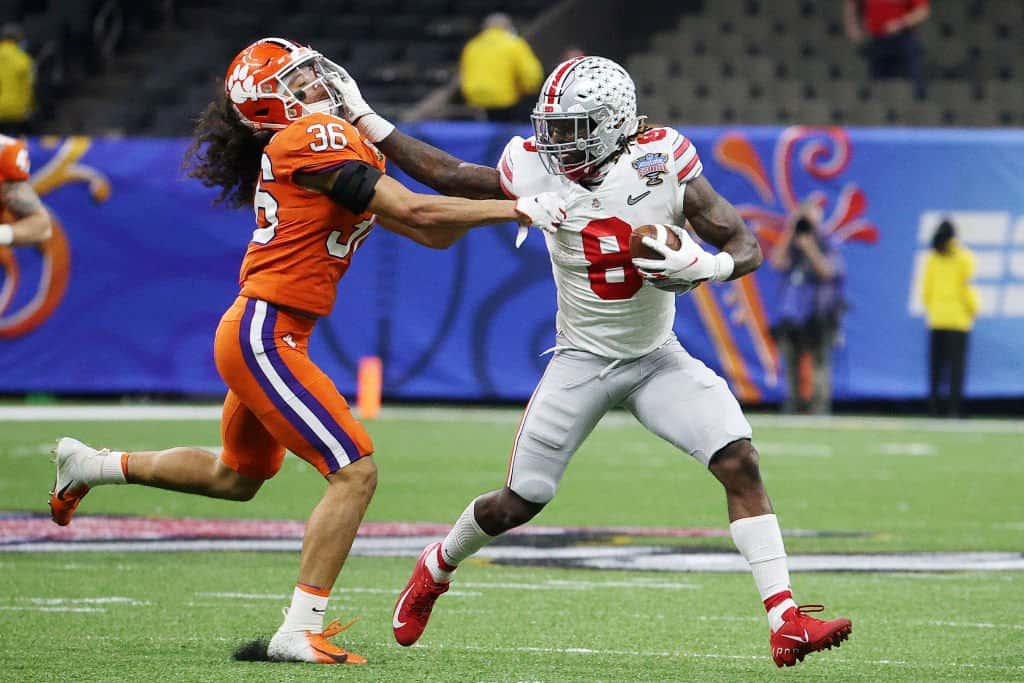 Scouting reports for 2021 NFL Draft prospects from the Big Ten Conference from Tony Pauline, Pro Football Network’s Chief Draft Analyst and NFL Insider. To view overall and positional rankings, visit and bookmark Pauline’s Draft Board. Please note that the links below will open in a new tab.

Positives: Two-down, run-defending linebacker with average size and speed. Fires up the field, squares into ball handlers, and gives effort defending the run. Fluid moving laterally, easily changes direction, and makes tackles in space. Easily redirects to the action and holds his ground against blocks from tight ends.

Analysis: Eifler was a solid linebacker for Illinois but has athletic and scheme limitations. He could back up on the inside of a 3-4 alignment but must really stand out on special teams to have any chance of making a roster at the next level.

Positives: Smart, instinctive linebacker with limited physical skills. Quick to read and diagnose, flows well laterally, and is rarely off his feet. Disciplined, remains with assignments, and sells out to make plays. Fires upfield, gives effort defending the run, and sells out on the blitz. Agile, makes plays in space, and possesses a good head for the ball.

Negatives: Must improve his backpedal moving in reverse. Possesses average size and speed.

Analysis: Hansen is a terrific football player and has a great head for the game, but he comes with average size and limited speed. He makes more plays with his instincts and hustle than natural physical talents. Hansen will have an opportunity to make a roster as a seventh or eighth linebacker and special teams player.

Positives: Large possession receiver who consistently wins out for the contested throw. Uses his hands to separate from defenders, gets vertical, and exposes himself to the big hit in order to come away with the catch. Plays to his size and turns upfield after the catch, working to pick up yardage. Tough to bring down in the open field. Adjusts to the errant throw and looks the pass into his hands.

Negatives: Does not possess naturally soft hands and needs to steady the ball rather than plucking it from the air. Lets catchable passes slip through his hands. Possesses marginal quickness as well as speed.

Analysis: Imatorbhebhe is an imposing target who makes some terrific receptions on occasion, but he lacks the quickness, play speed, and natural pass-catching ability to be anything other than a fifth receiver at the next level.

For information on Illinois cornerback Nate Hobbs, check out his 2021 NFL Draft Profile.

Positives: Versatile lineman who was effective at center and guard. Bends his knees, blocks with leverage, and shows explosiveness at the point. Keeps his feet moving, keeps his head on a swivel, and works to finish blocks. Quickly gets his hands up, correctly places them, and displays strength at the point. Stays square, turns defenders off the line and blocks down on them, engulfing opponents altogether. Anchors in pass protection.

Negatives: Late getting into blocks, which puts him at a disadvantage. Lacks agility. Beaten by quick first-step opponents. Lacks footwork in space.

Analysis: Crider is a tough, hard-working offensive lineman who was not graded by scouts before the season. He’s not a great athlete, but the versatility to play any of the three interior positions on the offensive line will get him late-round consideration.

For information on Indiana safety Jamar Johnson, check out his 2021 NFL Draft Profile.

Negatives: Plays way too tall and makes himself an easy target for opponents. Lumbers around the field and doesn’t make plays outside the box. Does not play with proper pad level.

Analysis: Johnson was a productive three-year starter for Indiana but comes with average measurables and does not play with leverage.

Positives: Large grind-it-out ball carrier who is best running downhill. Patient, waits for blocks to develop, and displays outstanding vision. Pounds it out on the inside, picks up yardage off initial contact, and falls forward when tackled. Keeps his feet moving, shows strength in his lower body, and effectively follows blocks on the field. Stays with blocking assignments and picks up the blitz. Squares into defenders and moves them from their angles of attack.

Negatives: Cannot evade defenders or create yardage. Gets into trouble when he tries to run east and west.

Analysis: Scott is a tough ball carrier, but he’s a one-dimensional prospect who is best running downhill in short-yardage situations.

For information on Indiana Whop Philyor, check out his 2021 NFL Draft Profile.

Positives: Strong, hard-working blocker who is best in a small area. Sets with a wide base, keeps his feet moving, and stays square. Fires into blocks, anchors in pass protection, and controls opponents once engaged at the point.

Negatives: Ineffective pulling across the line of scrimmage and blocking in motion. Not a natural knee bender or leverage blocker and is more of an arm wrestler.

Analysis: Banwart possesses solid size as well as growth potential and has shown enough skill to get consideration for a practice squad this fall.

For information on Iowa EDGE Chauncey Golston, check out his 2021 NFL Draft Profile.

Positives: Indiana transfer who missed the majority of the past two seasons with injury. Fundamentally sound, displays solid footwork sliding off the edge in pass protection, and stays square. Patient, keeps his feet moving, and keeps the opponent in front of him. Fights with his hands throughout the action and makes great use of angles as well as body positioning to seal the edge.

Negatives: Does not come across as a top athlete. Average height for tackle. Not smooth or fluid blocking in motion.

Analysis: When he was starting at left tackle for Indiana early in his career, I graded Cronk as a potential late-round prospect. Beset with injuries the past two years, he must first pass medical exams, and even then it will be an uphill battle for him to make a next-level roster.

Positives: Hard-working, first-step lineman with marginal athleticism. Fires off the snap, plays with terrific pad level, and effectively uses his hands to protect himself. Quickly locates the ball handler, slides off blocks laterally, and plays through the whistle.

Negatives: Lacks a great closing burst. Often controlled by a single blocker despite his size.

Analysis: Heflin gets the most from his ability but lacks great upside. His tenacity and fundamentally sound football could help him capture a roster spot as a backup defensive tackle.

Positives: Underrated running back who consistently produces whenever he handles the ball. Patiently waits for blocks to develop, runs hard on the inside, and plays with resilience. Effectively follows blocks, has a burst through the hole, and beats defenders into the open field. Displays vision, quickness, and solid footwork.

Negatives: Watched his production fall off after a terrific sophomore season. Doesn’t pick up much yardage off initial contact. Plays to one speed.

Analysis: Sargent is a solid running back with next-level skills as a ball carrier, and he’s an undrafted free agent who could end up making a next-level roster as a fifth running back.

For information on Iowa linebacker Nick Niemann, check out his 2021 NFL Draft Profile.

Positives: Hard-working college tight end who does not project well to the next level. Extends his hands to make the reception away from his frame. Works blocks hard and displays solid strength at the point of attack. Keeps his feet moving and blocks with good knee bend.

Negatives: Does not finish blocks. Plays to one speed and doesn’t stretch the seam. Marginal pass-catching skills.

Analysis: Beyer was a solid complementary tight end at Iowa but possesses no outstanding physical characteristic to his game.