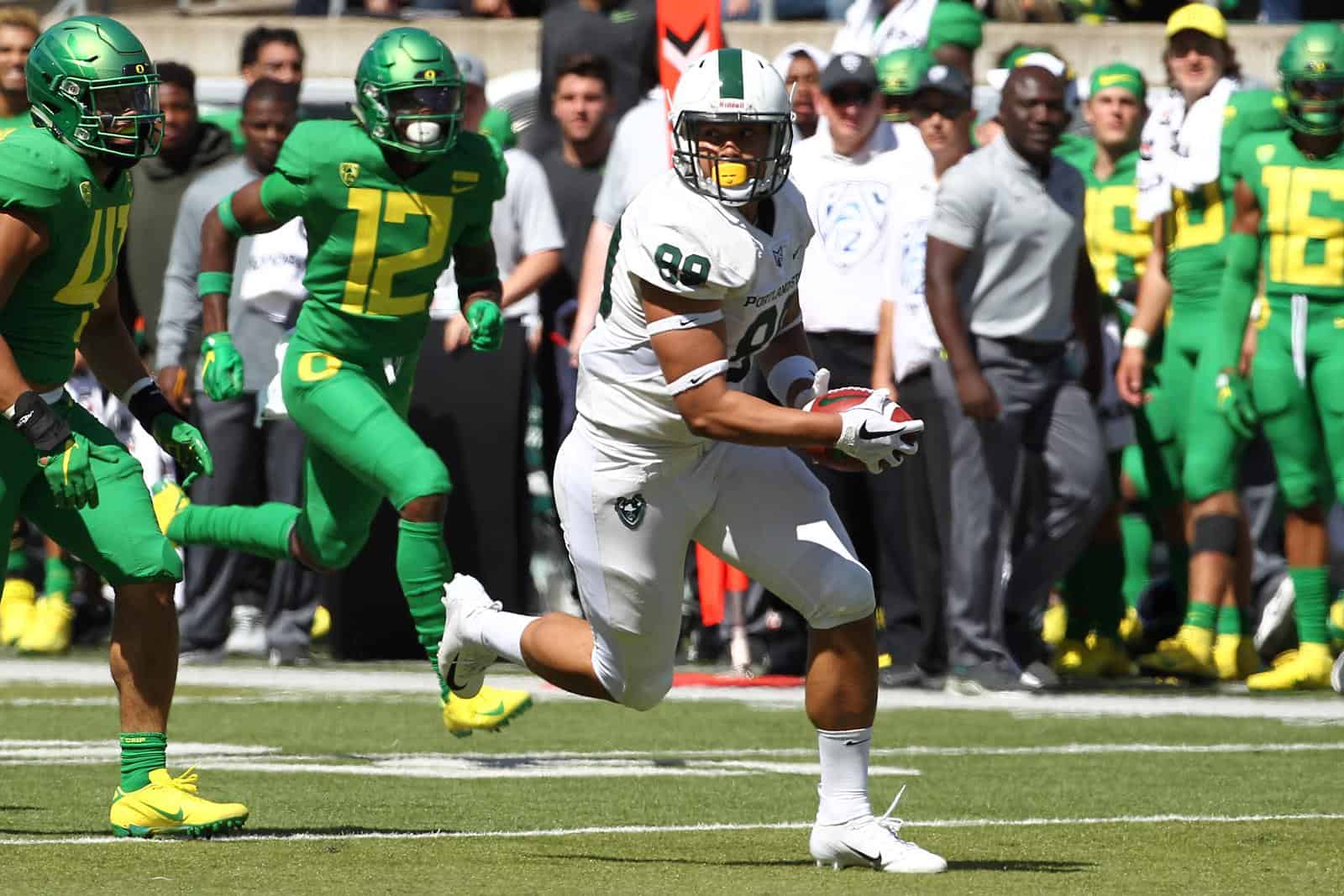 Career Snapshot: Three-year starter who earned Second Team FCS All-America honors and caught 36 passes for 474 yards and two touchdowns as a senior in 2019. Earned First Team All-Big Sky honors and made 28 catches for 580 yards and a career-high five TDs as a junior. Made 45 receptions for 673 yards and three touchdowns as a sophomore. Missed two games in 2018 due to an ankle injury.

Positives: Reliable pass catcher who could line up as a tight end or H-back at the next level. Fluidly releases off the line of scrimmage, quickly gets into routes and plays with balance. Comes back to the quarterback and keeps the play in bounds after the catch. Extends his hands to offer the quarterback a target and makes the reception away from his frame. Blocks with leverage, fires off the snap and gives effort.

Negatives: Possesses average strength and really does not get much movement as a run blocker. Ran well at the combine but shows average burst.

Analysis: Highly graded by scouts entering the season, Taumoepeau is a solid pass catcher with a number of questions about his game. He may not have a true position at the next level, but a creative offensive coordinator will find a spot for him, and Taumoepeau’s approach to the game could help him make a roster.

Career Snapshot:Three-year starter at center who earned Third Team FCS All-America honors as a senior in 2019. Earned First Team All-Big Sky honors in each of his final three seasons at Southern Utah.

Positives: Tough, explosive center with poor next-level size. Possesses outstanding vision, fires off the snap and keeps his feet moving. Built low to the ground, stays square and blocks with leverage. Nasty and works to finish blocks. Fires out to the second level, nicely redirects to linebackers and shows the ability to hit a moving target.

Negatives: Average footwork in space. Struggles to finish blocks. Lack of height is an issue.

Analysis: Larsen was a terrific center at the small-school level, but he lacks next-level measurables. His instincts and intensity are plusses.

Positives: Underrated edge rusher who can be used at outside linebacker in a 3-4 alignment. Instinctive, remains disciplined with assignments and stays with the action. Tough, plays while injured and goes hard. Plays with balance and body control and keeps his feet off the initial block. Works his hands to protect himself, shows the ability to rush the edge and possesses a solid inside move.

Negatives: Plays with lean, fires up the field and explodes off the snap. Flows well laterally to the action and shows the ability to make plays in space. Quickly changes direction, immediately alters his angle of attack and plays to his 40 time. Occasionally drops off the line of scrimmage on zone blitzes and does a solid job. Lacks bulk and gets easily moved from his angle of attack. Lacks great closing speed.

Analysis:  Rodriguez was very productive for Weber State and showed consistent progress the past three years. He’s an underrated pass rusher who could develop into a three-down defender, and Rodriguez will be a bargain once signed after the draft.

Career Snapshot:Three-year starter who earned Second Team All-Big Sky honors in each of his final two seasons at Weber State. Made 59 tackles (seven for loss) with one sack and four pass breakups as a senior in 2019. Made 41 tackles (five for loss) with 1.5 sacks and two PBUs as a junior.

Positives: Strong two-down run defender who gives great effort. Instinctive, tough and remains disciplined with assignments. Works hard to get involved in the action, fires up the field and plays heads-up football. Displays great anticipation, wraps up tackling and always looks for someone to hit. Does not bite on play-action passes and shows ability in zone coverage.

Analysis: Tesch was a terrific run defender at Weber State, but he comes with athletic and scheme limitations. He possesses a special-teams mentality, but he’s a long shot to make it at the next level.

Positives: Athletic defensive end prospect with big upside. Plays with proper pad level and knee bend, works his hands throughout the action and fires off the snap with a terrific first step. Fluid when asked to twist or stunt and moves well to every area of the field. Collapses down the line to make plays against the run. Focused on by opponents and works his hands well to get off blocks.

Negatives: Possesses a thin frame and limited strength. Easily moved from the point of attack. Lacks a quick closing burst.

Analysis: Williams is a terrific developmental prospect with size, athleticism and the ability to develop into a backup defensive end in a four-man line.