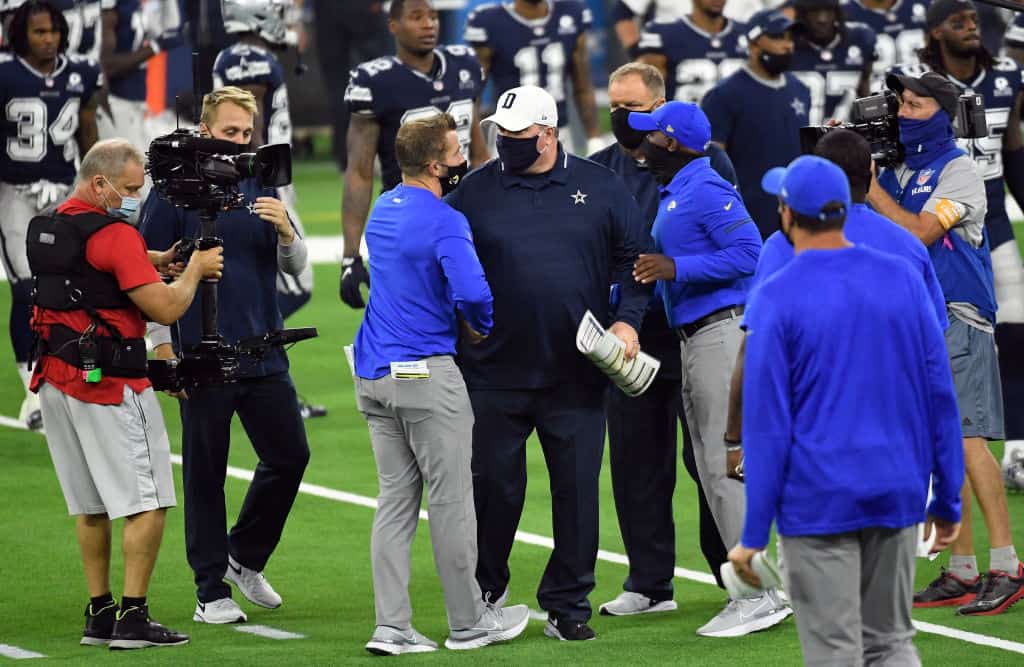 The first week of the NFL season is now behind us, and the PFN betting team has already started to break down Week 2, including some of our early best bets. As soon as the books released their lines, we began to try and find where there was value and where we could take advantage of some soft markets. Did the bookmakers get it right, and where are the betting markets taking these numbers? Here are three games that caught our eye.

Both of these teams are coming off of losses where they struggled on defense. We knew the Cowboys were going to be subpar in the secondary with their lack of weapons, but their ineptitude at also stopping the run was surprising. Atlanta, on the other hand, allowed Russell Wilson to throw for 322 yards and four touchdowns this past week. They also allowed Chris Carson to gash them on the ground.

Luckily, Atlanta was still able to put points on the board to try and compete with Seattle. Dallas, thanks to a combination of unfortunate penalties and questionable play-calling, seemed much less competent offensively. The weapons were working; Dak had a respectable day through the air, while Gallup, Lamb, and Cooper racked up decent yardage totals. The problem was in the red zone, where Dallas’ offensive sputtered to a grand total of 17 points.

Matt Ryan had 450 passing yards and two touchdowns on 54 pass attempts Sunday. He needed to throw the ball that much because the team was down early against the Seahawks. With a better defensive line and a plethora of weapons, the Cowboys should be able to score in a similar fashion to Seattle. Considering the Cowboys defense surrendered 422 total yards to the Rams, Ryan should have no issue scoring in garbage time to get us over this total.

The total in this game opened up at 50. It has quickly been bet up to 52. There is absolutely no reason you should be looking at the under here. Both these teams have weapons galore on offense, while they struggle with holes all over the field on defense.

With the number only heading up, grab this total now before it closes closer to 54-54.5. According to the Action Network, a whopping 71% of the bets are currently on this over. With the line moving in that direction, I will join the rest on this over. This will likely be my most confident Week 2 NFL best bet.

This game has been getting absolutely destroyed since the bookmakers opened the 49ers as six-point favorites on the road. According to the public betting chart, an unbelievable 92% of bettors are backing the Niners in this game.

The defending NFC champions lost 24-20 to the Arizona Cardinals, and quarterback Jimmy Garoppolo struggled to look like a competent starter. On the other side of the coin, the New York Jets looked even worse after being completely shut down by Josh Allen and the Buffalo Bills.

Both these teams looked putrid in Week 1, so why would the 49ers be favored by this much, and why is everyone and their mothers on them in Week 2? Easy, Adam Gase is a terrible coach, and Kyle Shanahan is not. On top of that, the 49ers were one of the better teams against the spread in 2019, going 8-6.

For those willing to back the Jets (all five of you), you can find solace in the fact that these Niners are suffering from quite a few injuries. Star tight end George Kittle suffered a leg injury before halftime. He played the rest of the game but was relatively ineffective.

Rookie Brandon Aiyuk was not healthy enough to play, they are still missing Deebo Samuel, and they lost return specialist Richie James. Kendrick Bourne and Trent Taylor were the lone wideouts who hauled in passes against the Cardinals. If Kittle is out next week, this offense might struggle against any defense besides the Jets.

The problem with the Jets is that the offense looks awful. Buffalo has an elite defense, but they looked like the 1985 Bears against Sam Darnold. The 49ers also have what most would consider an elite defense.

This Jets team will struggle again to put up points, and as long as the 49ers can continue to run the ball, they should put up enough points to cover this number. If you can still get this under a touchdown, grab it now. It might be too late, but I would still trust this number at seven.

Every season, bettors and fans tend to overreact to what they saw in Week 1 of the NFL season. The Cleveland Browns were absolutely embarrassed by the Baltimore Ravens on Sunday, mustering a grand total of six points. Baker Mayfield went 21 for 39 for 189 passing yards and a touchdown, with an interception in the very first drive of the game.

Now, some people are going to claim that the Browns’ misfortune is clearly because they have a new coaching staff and didn’t have a preseason. Unfortunately, that excuse isn’t going to work this time around, as both Carolina and Washington have entered the season in similar situations and finding a way to score.

The reality is just that Mayfield looked terrible. When you break down his actual mechanics, he looked flat-footed and incompetent as he tried to drop back and throw. Odell Beckham Jr. continued to prove he wasn’t worth his big contract, and the only bright spot on the day was the run game with Nick Chubb and Kareem Hunt.

On the other hand, rookie Joe Burrow proved that he was competent enough to lead a Cincinnati Bengals squad devoid of talent. Even in the loss to the Los Angeles Chargers, he improved throughout the game and had them in a position to win in the end.

This is a case of two teams heading in two different directions. Mayfield simply isn’t taking the step up he needs for this team to be better, whereas Burrow and the Bengals are starting to figure it out. I can see this game being played the same as the Chargers and Bengals game; close throughout, a heavy dose of the run game, and someone winning by a field goal.

Something to keep in mind with the way this number has changed. It opened at -5.5 and has since been bet to -6. That is interesting considering 61% of the bets are on the Bengals. This means that some big-time bettors are moving the betting market in favor of the Browns even if more tickets are coming in on Cincinnati.

I won’t follow the “sharps” on this one. Take the Bengals to cover this number. You can even wait closer to the game and hope that it climbs to a full seven.