PRO FOOTBALL NETWORKThe NFL is fast. PFN is faster.
More
Facebook
Twitter
ReddIt
Linkedin
Email
What's in this article? Click to show
Markus Bailey is behind the 8-ball in 2020
Bailey has the potential to be a major steal
Bottom line

Cincinnati entered this offseason with competition at several positions, including linebacker, meaning that rookie Markus Bailey’s 2020 season was one of a number of names to watch in training camp. The Bengals added Bailey, out of Purdue, with the 215th overall pick in the 2020 NFL Draft to go with Logan Wilson out of Wyoming and Akeem Davis-Gaither of Appalachian State. Bailey, if he develops the way he’s expected to, could easily be one of the biggest steals of this year’s draft and could play an essential role in elevating the Bengals defense as they look to bounce back in the coming years.

Bailey entered the draft with the odds stacked against him when his senior season ended after just four games started due to a torn right ACL. This wasn’t the first time he sustained that type of injury, considering he also tore his left ACL as a true freshman back in 2015.

Analyst Daniel Jeremiah is one of many who marked Bailey as a second-round talent based on his film and production alone. Still, such a severe injury history made teams wary of taking him as early as he deserved to go.

Bailey has the potential to be a major steal

Bailey may be a little undersized for the position at 6-foot, 235 pounds, which also could have played a small part in him coming off the draft board as late as he did. However, in terms of production, Bailey certainly wasn’t lacking for the Boilermakers. As a redshirt freshman, he led the team with 97 tackles, six tackles for loss, and four interceptions. The next year, Bailey recorded a team-high of 89 tackles, 11 for loss, seven sacks and one interception.

He truly peaked in 2018, leading Purdue once more with 115 tackles, nine tackles for loss, 5.5 sacks, and one interception. Bailey was poised to expand upon his success in his senior year before he was sidelined by injury, registering 14 tackles, two for loss, and one sack over four starts. If that type of production extends to the professional level, the Bengals defense is going to be in business very fast, and Bailey has the chance to become a staple right out of the gate.

Josh Bynes is the veteran of the linebacker room – practically every other name is a new, inexperienced player with the potential to make a name for themselves and gain respect with the Bengals quickly.

Bailey certainly falls under that, and his balanced skillset and ability to be a force against the run is something the Bengals should take advantage of. The playing field is a level one, though, and the Bengals have one of the most in-depth and intriguing groups of linebackers in the league right now. Someone has to capitalize, and there’s no reason to think that it can’t be Bailey who outshines the rest in the end. 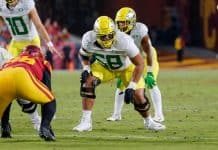