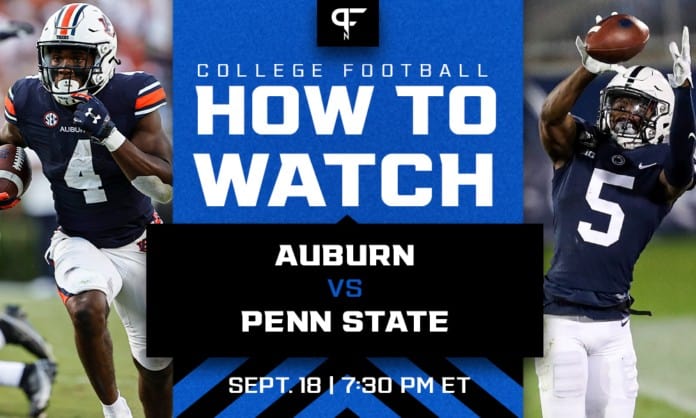 Auburn vs. Penn State odds, line, prediction, and how to watch in Week 3

From rumors about James Franklin, to Sean Clifford and Tank Bigsby -- Auburn vs. Penn State odds, prediction, and channel are all right here.

A top-25 college football matchup provides us with plenty of Week 3 entertainment, but it became a little more interesting this week. A potential coaching distraction could affect Penn State, which is just what Auburn wants. Let’s take a look at the current odds, the TV channel, how to live stream, and a prediction for the Auburn vs. Penn State Week 3 game.

Auburn vs. Penn State odds and prediction for Week 3

James Franklin coming up as a coaching candidate for the USC opening shouldn’t be a surprise. Everyone had him pegged as one of the top options for Southern Cal. However, it’s one thing when only one side has interest — things change when the interest is mutual.

Penn State sits at 2-0 entering the biggest game of their season so far, and the players now have to wonder if their coach will leave for another job. They face an Auburn team that also sits at 2-0, but could the Nittany Lions be looking at their future? The Tigers began the Bryan Harsin era this year, and they’ve been scoring at a blistering clip of 61 points per game against Akron and Alabama State.

That has to change, right? Stopping the run will be the big key for Penn State. Auburn running back Tank Bigsby averages 10 yards per carry but will face a defense allowing just 124 yards per game. One of those has to give, and the winner plays a big role in determining the outcome.

Penn State hopes quarterback Sean Clifford can be the guy for them this year, but big games haven’t been kind to him. He produced a solid game against Ball State last week but wasn’t a significant factor against Wisconsin in Week 1. New offensive coordinator Mike Yurcich continues to give Clifford chances to get in a rhythm, and he’s hoping that eventually pays off for the Penn State offense.

A college football game featuring the Big Ten and SEC is a must-watch, and this one’s not an exception. Auburn and Penn State have a ton of talent on their rosters, and that will lead to some fun in Beaver Stadium this Saturday. With 100,000 fans in the stands, you can bet the atmosphere will be electric.

One big positive in Penn State’s favor is that they’ve been tested. Ball State and Wisconsin presented unique challenges for the Nittany Lions, and Auburn doesn’t have that same experience. It’s a factor that should favor the home team enough to get them the win.

How to watch Auburn vs. Penn State this week