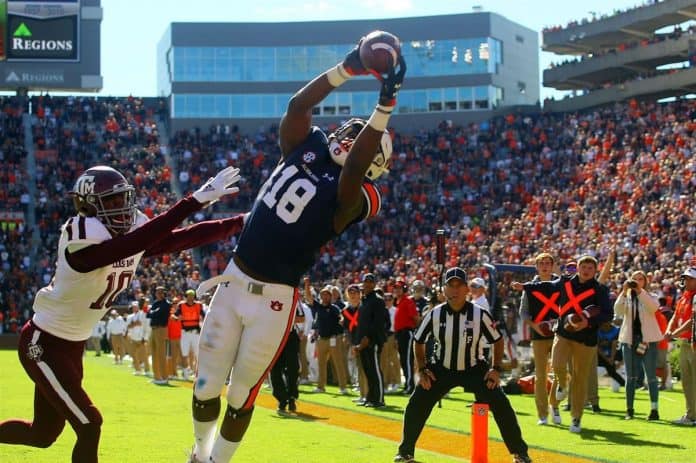 2021 NFL Draft: Who are the Auburn Tigers’ top prospects?

Who are the Auburn Tigers' top prospects in the 2021 NFL Draft? From Seth Williams to Big Kat Bryant, Auburn boasts an intriguing core of talent.

The Auburn football program is coming off of a 2020 NFL Draft that featured six Tigers being selected, including two first-round picks in defensive tackle Derrick Brown (Carolina Panthers) and cornerback Noah Igbinoghene (Miami Dolphins). Prior to the 2020 NFL Draft, the Auburn Tigers hadn’t produced a first-round draft pick since 2014. In that draft, both offensive tackle Greg Robinson and pass-rusher Dee Ford heard their names called in the first round. After reviewing the top Auburn 2021 NFL Draft prospects, it doesn’t appear they will be producing any first-round talents next April. With that said, Auburn does have some exciting prospects who have NFL futures.

At this time last year, no one was talking about quarterback Joe Burrow and cornerback Jeff Okudah as top-five selections, but both players saw their draft stock soar after their spectacular play in 2019. Luckily for the Auburn roster, it appears that the Tigers will be playing football in some capacity in 2020, which gives draft-eligible players the opportunity to improve their 2021 Draft prospects.

Before, we take a dive into the top Auburn 2021 NFL Draft prospects, let’s take a look at a couple of mid-round players that the program has to offer.

With Noah Igbinoghene departing for the NFL, it is now Roger McCreary’s time to shine. He finished the 2019 season with a team-high 11 pass breakups while securing an interception and a forced fumble.

McCreary thrives as a feisty cover cornerback, utilizing his quick feet and fluidity to mirror wide receivers. As it stands today, McCreary is an early Day 3 prospect that could help his 2021 Draft stock with solid play this season.

K.J. Britt was a highly productive player for the Tigers in 2019, accounting for 68 tackles, 10 tackles for a loss, 3.5 sacks, and two forced fumbles.

Britt is a natural-born leader, who plays a disciplined brand of football. When you watch film on Britt, his spectacular instincts jump out. Britt will be drafted somewhere on Day 3 of the 2021 NFL draft, as he has an NFL future as a core special team player, who also offers depth at the linebacker position.

Coming off the heels of a spectacular 2020 wide receiver draft class, we are in store for an even better 2021 class. One name to watch when it comes to the 2021 wide receivers is the tall, physical Seth Williams from Auburn.

Williams is coming off a 2019 season that saw him haul in 59 receptions for 830 yards and eight touchdowns while averaging 14.1 yards per reception.

You won’t find a better receiver in the 2021 Draft class when it comes to winning the contested catch. Williams utilizes his frame well to shield from defenders and plays a physical style of football that allows him to overpower defensive backs. As Tony Pauline points out, “Seth Williams is already highly considered in the scouting community, and the film explains why. He’s a tall, lanky receiver with exceptional hands who displayed improvement throughout 2019.”

For a larger wide receiver, he moves very well and is a more than adequate route runner. Williams possesses an “alpha” mentality, which is evident when you watch him drag defenders all over the field.

While he could fall victim to a deep positional group, Williams should hear his name called in the second round of the 2021 NFL Draft. Williams, the reliable pass-catcher, is destined to lineup at the “X” position at the next level and should be able to contribute in the red zone immediately.

Contrary to his teammate Seth Williams, who wins based on size and physicality, Anthony Schwartz wins with world-class speed. In fact, Schwartz is on the same level of speed as the likes of Tyreke Hill (Kansas City Chiefs) and Henry Ruggs III (Las Vegas Raiders).

When you look at his 2019 production, you will be underwhelmed, as Schwartz hauled in 41 passes for 440 yards and just one touchdown. He was also able to create yards with his legs, however, rushing 11 times for 118 yards and two touchdowns. Overall, Schwartz averaged 10.7 yard per touch.

Schwartz was named to Bruce Feldman’s “College Football Freak List” for the 2019 season, being labeled as “the fastest man in college football.” As you’d expect, Schwartz thrives in the vertical passing game, as his elite speed allows him to create separation with ease. Also, Schwartz is an exceptional route runner, utilizing his speed and suddenness to get in and out of breaks on a dime.

Anthony Schwartz will be selected much higher than his production warrants, due to the game-changing speed he brings to the table. Whether it be in the return game, as a pass-catcher, or running jet sweeps, Schwartz is a threat to take it to the house every time he touches the ball. Speed kills, and because of this, it would not surprise me in the least to see Schwartz selected as a top-75 pick in the 2021 Draft.

With the likes of Derrick Brown, Nick Coe, and Marlon Davidson departed to the NFL, Auburn edge defender Big Kat Bryant is destined for an expanded role in 2020. Serving as more of a rotational player, Bryant has been highly productive during his tenure at Auburn, accounting for 39 tackles, 8.5 tackles for a loss, 7.0 sacks, two interceptions, four passes defended, two forced fumbles, and a touchdown.

Bryant is athletic, stout against the run, and physical. He also plays with an outstanding motor and tremendous gap discipline. Where Bryant will earn his money is chasing the quarterback. On a very talented Auburn defensive line, it was Big Kat Bryant that led the team in quarterback hurries in 2019.

The 2020 season will give Big Kat Bryant the opportunity to improve his 2021 Draft status, but at this point, he is a mid-round prospect.