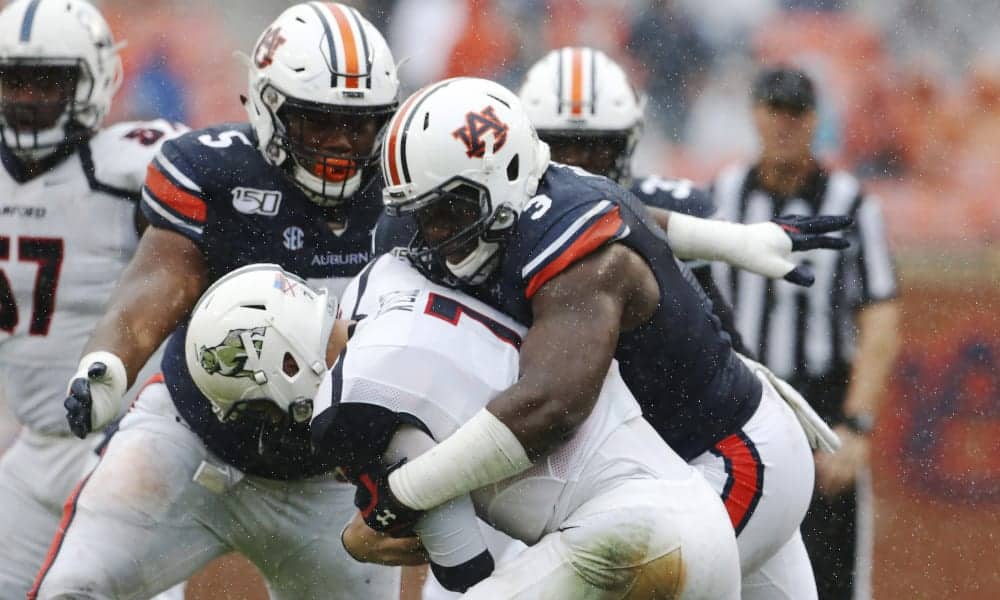 Every year, fans like to think that their team came out the winner of the draft. Sadly, the NFL Draft has about as many “losers” as it does winners. We’re here to sort out which teams are which as we continue our 2020 NFL Draft grade series with the Atlanta Falcons.

There is no “right” or “wrong” way to approach the NFL Draft. A team that drafts BPA (best player available) can have just as much success — or failure — as a team who drafts to fill specific needs. A team that has 15 selections can wind up with the same — or worse — grade as a team who made five picks.

Half of the fun of the NFL Draft is looking at how everything shook out for each team and trying to imagine the implications that class is going to have on the team’s future. Did the Falcons’ selections bring them closer to a championship? Are these the guys who are going to get Matt Ryan back to a Super Bowl?

Let’s dive into the Falcons 2020 NFL Draft for some grades!

Who did the Atlanta Falcons draft?

For most teams, the best player they selected in the 2020 NFL Draft is their first-round pick. I don’t believe that’s the case with the Falcons. They got a better player at a better value in Auburn defensive tackle Marlon Davidson. In Davidson, the Falcons are getting a versatile defender who is going to help a lackluster defense in multiple ways.

Davidson has shown the ability to play outside and provide a good pass rush from the edge, despite being larger than what you would expect from the typical edge rusher. He’s also a player you can line up at tackle to make the interior of your defensive line stronger. That kind of versatility in today’s NFL is invaluable.

The Falcons made an excellent choice here in the second round that will pay dividends for years to come. Davidson was the Falcons best pick and gets the team’s highest grade in the 2020 NFL Draft.

Another glaring hole on the Falcons roster coming into the 2020 NFL Draft was at linebacker. The team lost De’Vondre Campbell in the offseason and was left with only two linebackers on the roster who had considerable playing time. Atlanta was going to be in a world of hurt if someone went down with an injury. They needed to find someone to provide depth at the position.

Fresno State linebacker Mykal Walker fits that bill. While Walker may not come in and start immediately, he’s an athletic linebacker and fits what the Falcons’ defense needs. Walker will provide solid depth at the position and give the team a capable backup should the need arise. He’ll also provide them with some scheme versatility and the ability to keep a fresh rotation of linebackers on the field at all times.

Round 4 is really where the Falcons boosted their 2020 NFL Draft grade the most. They found two high-quality players who will help the team. Each should make the 53-man roster and provide solid depth, at worst.

The NFL Draft is as much about finding depth as it is finding starters who are going to make an immediate impact. The injury bug affects everyone eventually, and if you don’t have proper depth, it can tank your entire season. The Falcons have had some unfortunate luck with injuries, particularly in the secondary, over the past few seasons. They know the value of having capable backups.

Enter former Cal safety, Jaylinn Hawkins. There may not be a path for Hawkins to reach the starting lineup currently, but Hawkins’ immediate value is going to be as a hard-nosed backup in case the inevitable injury bug rears its ugly head. He’ll also provide the team with value on special teams.

If Hawkins does manage to see the starting lineup at some point during the season, he should be able to perform admirably. Hawkins may not have the greatest speed for the position, but he’s a stout safety

At a minimum, he gives the Falcons a physical presence over the middle of the field. He can be a solid tackler on plays that develop in front of him, and a safety who can come up in the box to provide solid run support

One of the biggest holes on the Falcons roster coming into the 2020 NFL Draft was at cornerback. The team released former Pro Bowl starting cornerback Desmond Trufant in the offseason. They didn’t do much in the free agency period to replace Trufant, either, coming into the draft with Kendall Sheffield and Isaiah Oliver as the projected starters at the two outside cornerback spots.

The Falcons addressed that need early spending their first pick, number 16 overall, on former Clemson cornerback A.J. Terrell, ostensibly to slide into the starting lineup. But was it the right selection?

Both of the cornerbacks selected in the first round of the 2020 NFL Draft were major reaches. The Falcons chose Terrell with players like Auburn’s Noah Igbinoghene, LSU’s Kristian Fulton, and Utah’s Jaylon Johnson still on the board. The pick filled a need for the team, but if Terrell doesn’t come in and start immediately — and make an impact — the selection will be seen as a questionable one.

The Falcons get a ‘B’ grade for their 2020 NFL Draft efforts. Atlanta didn’t start off strong with the A.J. Terrell selection, but things got markedly better from there on out, with strong selections in rounds two through six.

Quality players were selected at points of high value. Atlanta found a few overlooked players who will come in and, if not start right away, provide the team with excellent depth. All-in-all, you can’t really ask for much more than that.

Chris Spooner is an NFL Draft contributor for PFN. You can follow him and PFN on Twitter @CSpoonerPFN and @PFN365.