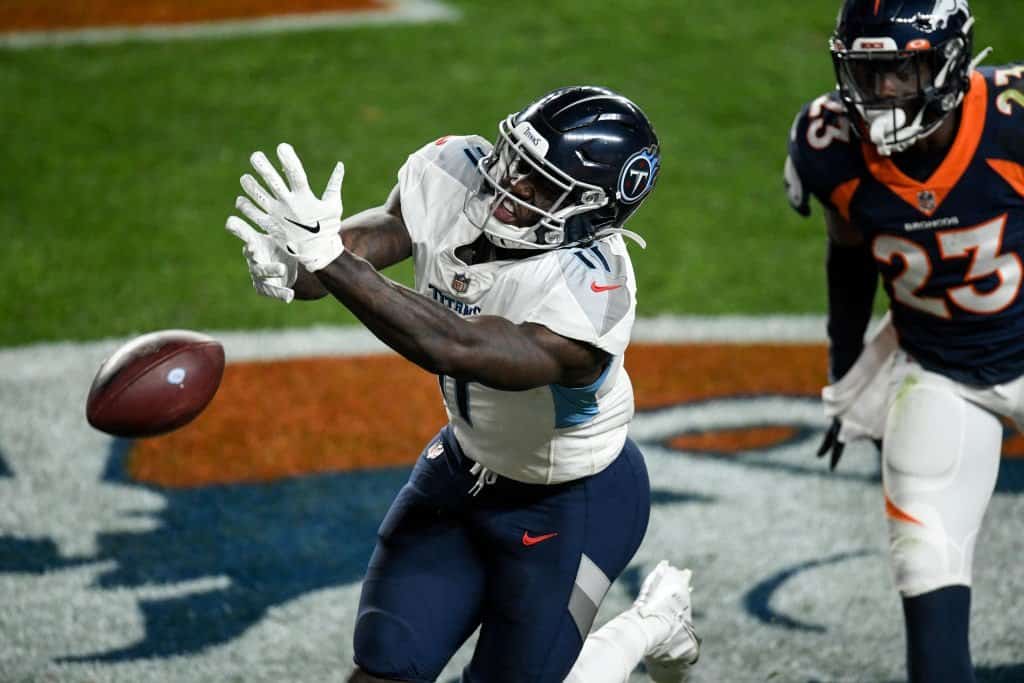 Photo Credit: Getty Images
What's in this article? Click to show
What did Ojemudia show against the Titans in Week 1?
There’s still plenty of room for improvement for the rookie corner
What to look forward to from Ojemudia in Week 2?

The NFL is back and Week 1 ended with a big-time matchup between the Tennessee Titans and the Denver Broncos. The game came down to the final moments, with Titans kicker Stephen Gostkowski sealing a 16-14 Tennessee victory with a late field goal. While the Titans came away with the win, the Broncos were in the game until the very end, due in part to physical defense and a surprising performance from Michael Ojemudia, the Broncos’ cornerback who made his first career start. Ojemudia, the Broncos third-round pick out of Iowa, was one of the most impactful players in the secondary against Tennessee and showed great poise in his first NFL showing.

After beating out De’Vante Bausby for a spot on the final roster, even though an injury held him out late in training camp, Ojemudia was a pleasant surprise in the loss to the Titans. Defensive coordinator Ed Donatell showed a great deal of confidence in the rookie and proved that there could be life for the Broncos secondary after losing Chris Harris Jr. to free agency. In this piece, we’ll break down how Broncos cornerback Michael Ojemudia played in his first NFL action on Monday night.

What did Ojemudia show against the Titans in Week 1?

Officially, Ojemudia was the Broncos third cornerback against the Titans, but the rookie played outside in Denver’s sub-package defense, with starter Bryce Callahan taking the slot defender role. Ojemudia made his presence known early when he broke up a Ryan Tannehill pass that was intended for Titans tight end Jonnu Smith on 3rd and 7, forcing what would end up being Gostkowski’s first missed field goal of the night. This physical style of play was exactly what Denver was looking for when they selected Ojemudia while other cornerbacks like Cameron Dantzler and Bryce Hall were still on the board.

While he isn’t the flashiest corner by any means, Ojemudia is a sneaky good athlete. Ojemudia ranked as the 4th-most athletic cornerback of the 2020 NFL Draft class, with a Relative Athletic Score (RAS) of 9.18, and was rated as having “good speed, explosion, and agility.” When looking at Ojemudia and his fit in this Vic Fangio scheme, he fits the bill perfectly as a physical zone coverage corner.

Related | Three takeaways from the Titans and Broncos Week 1 matchup

At Iowa, he was a defender that didn’t give up much and kept everything in front of him, which was what he did for the most part during the Broncos’ Monday night game. Ojemudia filled in and played extended minutes when starting cornerback A.J. Bouye went down with a shoulder injury.

The rookie almost came away with his first career interception when he jumped a Tannehill pass in the third quarter, but it was called back on a questionable unnecessary roughness penalty by Alexander Johnson on Derrick Henry. Even though the interception didn’t stand, it showed a glimpse of the type of player Ojemudia could be, his ability to understand coverages and read the quarterback.

Ojemudia stepped up in a big way for the Broncos on Monday night after the Bouye injury and played relatively well, but that’s not to say he didn’t have things that he needs to improve upon. For most of the fourth quarter, the Broncos cornerback was matched up against Tennessee’s dynamic second-year receiver, A.J. Brown. In the Titans’ crucial drive late in the game, Brown was targeted four times by Tannehill and only caught one pass for 11 yards. However, Ojemudia was called for defensive pass interference while defending Brown on a 2nd and 10 that resulted in Tennessee getting deep into Broncos territory.

This type of mistake is one that normally wouldn’t surprise anyone, as he is a rookie playing in his first NFL game. However, making that mistake at that point in the game proved costly. Ojemudia played well for the majority of the game, but lapses like that will not sit well with the coaching staff if they become a regular occurrence in late-game situations. It is a lesson that Ojemudia can, and will, learn from, especially with the veteran presence in the secondary around him.

Along with the pass interference call, Ojemudia almost gave up the game-sealing touchdown to Brown on a pass that was, luckily, a bit overthrown by Tannehill. It wasn’t the best rep by the rookie corner, as he was clearly beat by the former Ole Miss receiver. Again, this is where experience comes into play.

What to look forward to from Ojemudia in Week 2?

Next week, if Bouye is unable to play, the Broncos will likely start Michael Ojemudia at cornerback across from Bryce Callahan. The Broncos will face off against the Pittsburgh Steelers, who are coming off a huge victory over the Giants. Ojemudia will have his hands full, matching up against the likes of Juju Smith-Schuster, who had a career game the last time he played against the Broncos.

Additionally, he could see some run against Steelers wideout Diontae Johnson, who was targeted 10 times in their win on Monday, as well as James Washington. Ojemudia played well through the first three-quarters of the Broncos’ loss, but lapses in his play cost the team late in the game. Those same mistakes can’t be made against this Steelers team that looks to have Ben Roethlisberger back to his usual form.