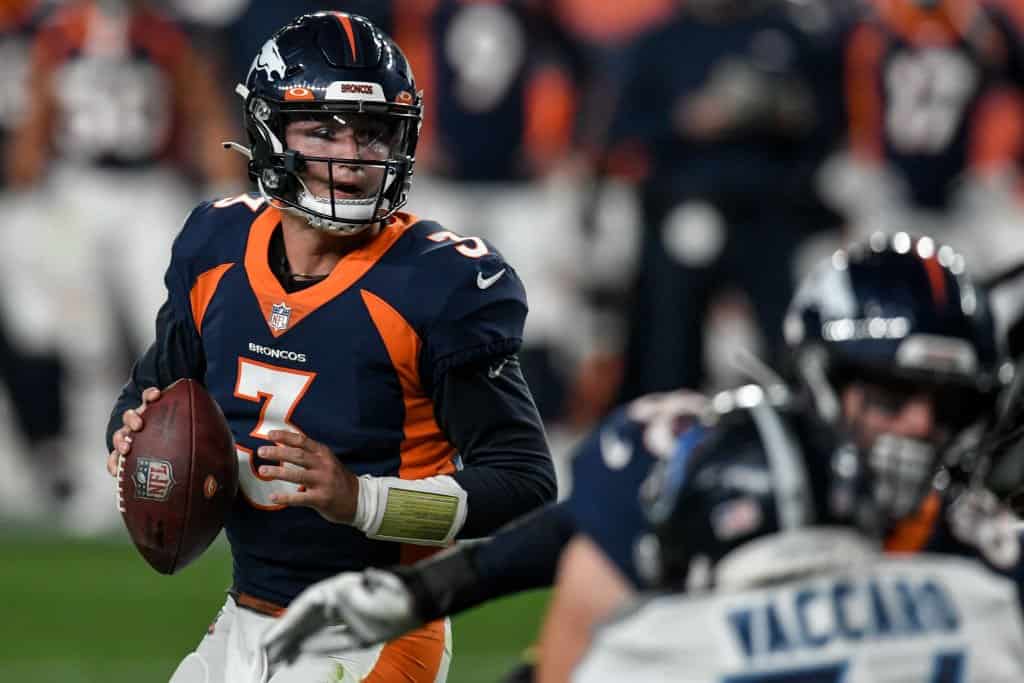 DENVER, CO - SEPTEMBER 14: Drew Lock (3) of the Denver Broncos works against the Tennessee Titans during the second quarter on Monday, September 14, 2020. (Photo by AAron Ontiveroz/MediaNews Group/The Denver Post via Getty Images)
What's in this article? Click to show
Noah Fant is an offensive star for the Broncos
A tale of two fourth-and-1’s
Denver’s special teams has improved a lot from 2019

Noah Fant is an offensive star for the Broncos

One of the clearest takeaways from the Titans and Broncos Week 1 matchup was that Noah Fant seems to have taken the big second-year leap that Broncos Country was desperately hoping for.

Related | What are the three biggest storylines for the Denver Broncos in 2020?

Keep in mind; this offense was without their best player and Drew Lock’s security blanket, Courtland Sutton. The being said, in the first half, you wouldn’t have known it with how Fant helped Lock move the offense down the field through the air. In the first half, Fant hauled in five passes for 81 yards and a touchdown, enough to lead the Broncos receivers in all three categories by game’s end.

As impressive as Fant was in the first half, he was dead silent in the second half, which is a big part of the reason why Denver’s offense went dormant down the stretch. Once defenses are forced to choose between defending Fant and defending Sutton, those silent halves should become a thing of the past for the second-year tight end.

A tale of two fourth-and-1’s

Another big takeaway from the Broncos and Titans’ Week 1 bout was just how pivotal each of the teams’ attempted fourth-down conversions were. Each team had the ball facing fourth-and-goal at their opponent’s one-yard line, and those plays determined the outcome.

Featured | Is Drew Lock capable of leading Denver to the playoffs in 2020?

When the Broncos were facing fourth-and-goal at the Titans’ one-yard line, they decided to run a shovel pass to tight end Jake Butt. The play was immediately swallowed up for either no gain or a slight loss, and the Broncos missed their opportunity to break the 7-7 tie. It was a situation the team shouldn’t have even been in, as Lock missed a wide-open Nick Vannett in the endzone earlier on that set of downs.

When the Titans were facing fourth-and-goal at the Broncos’ one-yard line, Tannehill rolled out and found a wide-open Jonnu Smith in the back of the endzone. The play gave the Titans a huge 13-7 lead, but if the Broncos handled their own goal line possession better, Smith’s score would’ve either put the Titans up three or would’ve shrunk their deficit to just one point.

Denver’s special teams has improved a lot from 2019

It doesn’t get mentioned much because special teams are easily forgotten, but the Broncos dismal special teams unit consistently hurt the team over the last two seasons. After one week in 2020, the unit looks much improved.

For starters, there are the obvious misses by Gostkowski. Some may argue Denver’s special teams weren’t responsible, however, it seemed they played a big role in the first three misses.

First, there was the miss that was undeniably blocked by Shelby Harris, and on the field goal attempt that followed the block, Harris got penetration again, and as a result, Gostkowski hooked it left. Those two misses caused by Harris likely played a role in Gostkowski’s mindset for the third miss on an extra point attempt.

While the field goal defense from the Broncos was impressive, the more promising special teams improvement came in regards to punting, as that improvement is more likely to be replicated in the weeks that follow.

Sam Martin was a huge improvement on Colby Wadman at punter for the Broncos, averaging over four more yards per punt than Wadman had last season, and pinning the Titans inside the 20 three times and inside the ten twice. As a result, Tennessee had an average starting field position of their own 15-yard line, not including the short field Melvin Gordon gifted them.