Aldon Smith is back in the NFL and already making plays for the Dallas Cowboys. His athleticism, even at 30, is helping him make an impact.

By Nicholas McGee
September 19, 2020
Jump around this article Click to show
Smith outperforms his impressive testing
Smith’s pass-rushing success is still apparent
Smith is stout against the run, too

Aldon Smith returned to the NFL after over four seasons away from the game last Sunday in the Dallas Cowboys’ Week 1 defeat to the Los Angeles Rams and did not need long to make an impact.

A first-round pick by the San Francisco 49ers in 2011 who quickly outperformed his athletic testing and appeared on course to become an all-time great pass rusher, Smith has put the personal problems that derailed his career behind him. In the season opener, he provided evidence that his long absence has not affected his ability to impact the game.

Smith may not be the same level of athlete he was when he entered the league, but his performance against Los Angeles suggests he can be a key contributor on a defense that needs to make strides if Dallas is to realize its Super Bowl potential in 2020.

During his time with San Francisco, Smith was a foundational piece of the 49er defense. He is unlikely to reach that level of importance in Dallas, but, should he continue to perform in the same manner he did on his return, the Cowboys will become increasingly comfortable relying on a player who appears ready to write his redemption story. 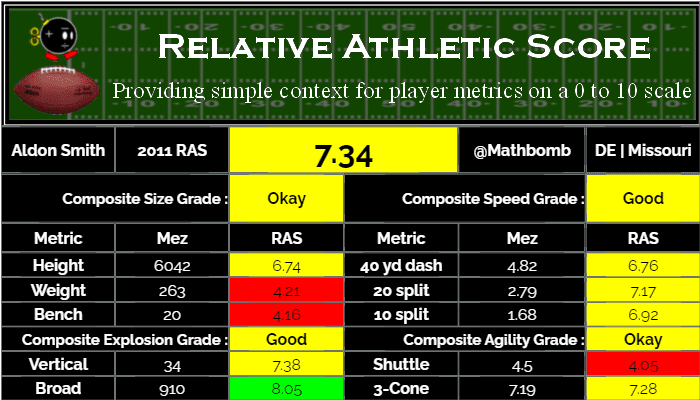 Smith did not test at an elite level ahead of a 2011 draft in which he was selected seventh overall. He received a highly respectable Relative Athletic Score (RAS) of 7.34 out of 10 and earned ‘Good’ Composite Speed and Composite Explosion grades but only gained an elite score for his performance in the broad jump.

However, Smith quickly put to bed any notion of any athletic shortcomings preventing him from wreaking havoc against opposing offenses.

In his first season with the Niners, Smith had 14 sacks and followed a stellar rookie year with 19.5 in 2012. He surpassed Reggie White to become the fastest player in NFL history to 30 sacks through a combination of burst, bend, remarkably refined hand usage, and an innate ability to translate speed to power.

He has not since come close to replicating that kind of production, and, after such a prolonged absence, it is unrealistic to expect Smith to be the same player he was at his peak. Yet, in an encouraging debut for the Cowboys, it was clear some of the traits that made him a force for the 49ers remain.

Smith registered his first sack since November 2015 when he brought down Jared Goff in the fourth quarter with a play that was less about his pass-rushing craft and more a result of his persistence. However, he did show the balance and body control that has always been a feature of his game to spin away from his blocker.

His most influential play of the game, a pressure that forced an interception from Goff, came on a stunt that was a trademark of his 49ers career. On this occasion, it was Everson Griffen playing the Justin Smith role and freeing up Smith to work his way inside and affect a throw that landed in the arms of Chidobe Awuzie.

It was in the run game where Smith’s intelligent hand usage shone through, as he was a constant feature in the backfield, with the Rams often paying the price for attempting to block him with tight ends.

Smith is stout against the run, too

Tyler Higbee endured a rough evening trying to block Smith, who demonstrated his ability to disengage and close to the football on this toss play that the Cowboys quickly shut down.

Smith later used a move that has long been part of his repertoire to make another run stop with the Rams on the fringe of the red zone, again getting free from Higbee but doing so this time with a two-hand swipe that opponents can expect to see more of providing he stays on the field.

The Rams attempted to double Smith, but he still succeeded in making this play against Cam Akers, as he defeated the blocks from Higbee and Gerald Everett to bring down the Rams’ rookie running back.

In the opening years of his career, Smith supplemented athletic gifts that did not quite fall into the elite spectrum with nuance that allowed him to dominate the competition.

He cannot burst off the snap in the kind of fashion that helped him enjoy such remarkable success with San Francisco. The nuance, however, persists. Between his hand usage, his quickness to create disruption on stunts, play strength, and body control, Smith possesses a well-rounded skill set that should continue to allow him to produce for the Cowboys.

Smith filled up the stat sheet to the tune of 11 combined tackles, including one for a loss, one sack, and two quarterback hits. He may never take over games as he did for the 49ers, but his debut proved Smith still has the talent to vindicate what initially looked a dubious Cowboys signing.