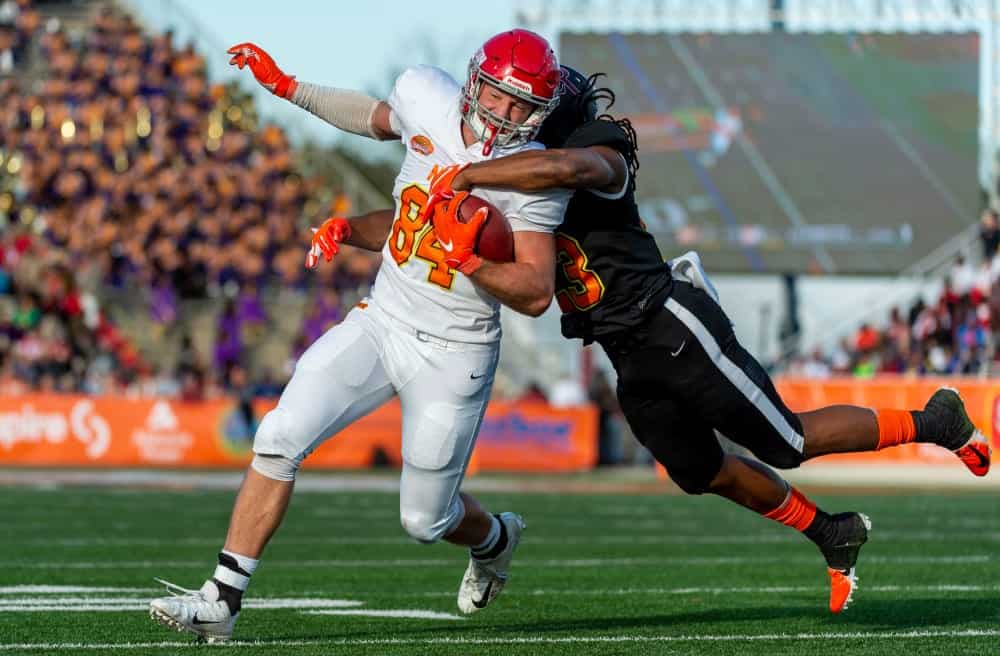 It was tough to get excited about the tight ends from the 2020 draft class from a fantasy perspective. However, when the New Orleans Saints selected Adam Trautman in the third round, 105th overall, dynasty owners have to be, at the very least, intrigued. The Saints are a great landing spot for any tight end truthfully, so Trautman’s dynasty value should see an increase during this offseason.

Trautman may not have been the first tight end selected from the 2020 NFL Draft, but he can still say that he was a Day 2 selection. Coming from a small school like Dayton, that’s pretty impressive, and it shows that teams felt he has the athleticism to compete at a high level in this league. He is the first Dayton player to be selected since 1977 and the highest-drafted player ever from the Pioneer Football League.

The Saints surely believe in him as they only had four selections throughout the three-day process and elected to use one of them to take Trautman. New Orleans and head coach Sean Payton have a long history of actively involving their tight ends in the offense. Payton’s impression of Trautman grew from what he saw of him at the Senior Bowl:

“This is a player that we felt did both things well,” he said. “Pretty good in-line blocking. His three-cone drill was exceptional. You see an athletic player. One of the things about a smaller school is sometimes you want to see him against competition that steps up. We’ve seen that a little bit from him at the Senior Bowl. I thought his combine was outstanding.”

As a senior, Trautman finished with 70 receptions for 916 yards and 14 touchdowns, earning himself the award of PFL’s Offensive Player of the Year. Expectations at the next level have never been higher for any previous Dayton football player, and Trautman is now under one of the best offensive minds in the NFL.

Similar skillset to past and current Saints tight ends

While Dayton isn’t exactly known for its football program, the same cannot be said of the basketball program. The Flyers held a 29-2 overall record in 2019-2020 and were on their way to a number one seed in the NCAA Men’s Tournament before the event was canceled. In high school, Trautman was an exceptional two-sport athlete in football and basketball, and it would have been no surprise if he had been a part of this great program.

Dayton football head coach Rick Chamberlin openly admits that he kept Trautman away from the basketball team. A basketball background is very similar to another former Saints tight end: Jimmy Graham. Graham played basketball for all four years of his tenure at the University of Miami while only football for one season.

Those athletic traits were enough to catch Payton’s eye, and in his prime with the Saints, Graham was, arguably, the best fantasy tight end to own. Excluding his rookie year in 2010, Graham averaged 137.8 targets, 88.8 receptions, 1,099 yards, and 11.5 touchdowns, between 2011-2014 with New Orleans.

In addition to his similarities with Graham, Trautman also played quarterback while in high school, leading some people to compare him to current Saints’ QB Taysom Hill. It’s well known by now that Hill’s skillset ranges all over the place for the Saints’ offense. As a result, a big announcement was recently made in the fantasy community with ESPN stating that Hill will be TE and FLEX eligible on their platforms.

It remains to be seen whether other platforms will follow suit, but that is a huge boost to Hill’s fantasy value, and even more in Superflex dynasty leagues. Given their similarities, one has to wonder if Payton plans to use Trautman similarly down the road and what it could mean for his dynasty value.

As is the case with most rookie tight ends, expectations for Trautman are minimal going into his first season. Jared Cook is still the Saints leading tight end, but he’s 33, and New Orleans will likely move on from him pretty soon. In the meantime, Trautman will get to take the year to learn from Cook, Drew Brees, and the rest of the offense.

It is a wonder who New Orleans will have lead their offense at QB once Brees is retired, but with Payton at the helm, I’m not too concerned with who it will be. Trautman could easily be a fantasy TE1 in a few short years.

In rookie drafts, Trautman is going off boards around the mid to the back half of the third round in a majority of formats. Similar to draft night, he is not normally the first tight end taken either. In our PFN Dynasty draft, he was taken at the 3.12 position and was the second TE to come off the board behind Cole Kmet. I’ve seen other leagues where one of Devin Asiasi or Dalton Keene of the New England Patriots are selected before Trautman.

All three of these tight ends were drafted before Trautman, so it makes sense on some level, but I think Trautman is in the better position and is my TE1 of 2020 rookie drafts. Kmet was the first tight end drafted and the Chicago Bears’ first selection of 2020. However, it was a puzzling pick for a team that already has several tight ends on the roster, and just signed the aforementioned Graham to a two-year deal.

It would not be surprising to see Asiasi or Keene produce at a high rate under a Bill Belichick system. Still, there are too many uncertainties surrounding New England’s organization to make me feel comfortable. Besides, from a fantasy perspective, it’s not ideal to see two tight ends drafted from the same organization even if the Patriots have done it before.

For me, Trautman is the safest option from this draft class with the highest ceiling. Although I wouldn’t expect him to produce at a rate similar to Graham in his early years, it’s not crazy to believe that Trautman will be a consistent TE1 in the near future. Given the lack of options at tight end this year, it’s worth it to take a flyer on the former Flyer in the latter half of rookie drafts.

Eric Frosbutter is a writer and editor for Pro Football Network covering fantasy football. You can follow him @efrosbutterPFN on Twitter.