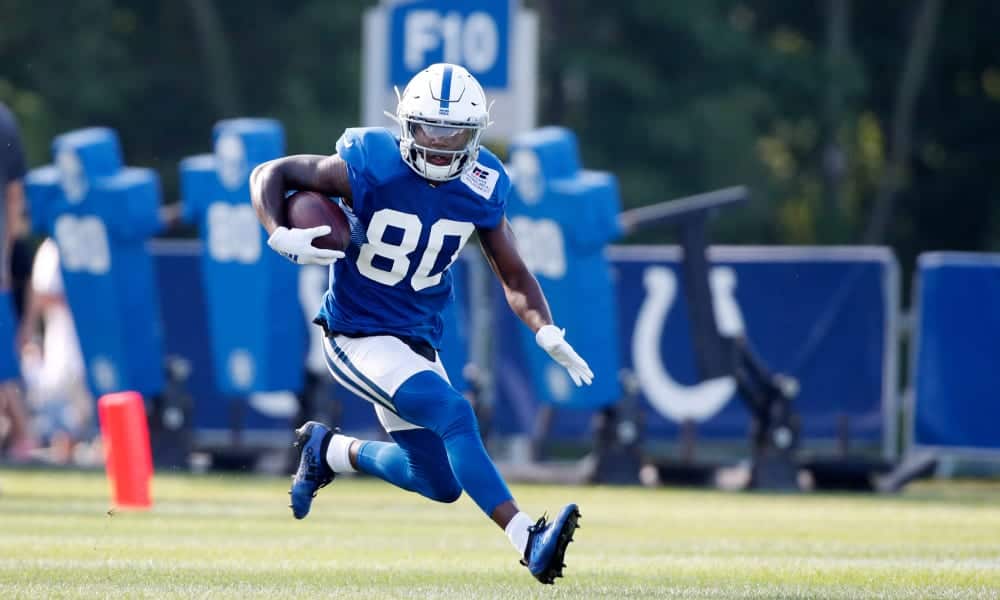 One of the innate beauties of sports is their ability to produce the unexpected. The element of surprise has long such been a major selling point that keeps millions of fans glued to the brutal ballet of the NFL. No team is unbeatable, and any player can emerge from the wilderness to enjoy a career day, as Chester Rogers did for the Indianapolis Colts in 2017, when he produced that season’s top-ranked performance from a wide receiver by Pro Football Network’s Offensive Share Metric (OSM).

It was a second successive year that honor went to a wideout from the Indianapolis Colts after Phillip Dorsett earned the top individual grade for a receiver in 2016.

Dorsett received his elite score despite a day of modest production, illustrating how significant yardage totals are not always required to top the charts in OSM. OSM is a process that uses the NFL’s NextGen Stats and a series of algorithms to measure a player’s influence on the offense’s production by assessing the factors only he could control.

Rogers had a massive influence on the Colts’ offense in the 20-17 defeat to the Pittsburgh Steelers in Week 10. He received a grade of 62.16 for his efforts and did so in a more typical manner than Dorsett.

Hauling in each of his six targets from quarterback Jacoby Brissett, Rogers finished the game with 104 yards receiving and a touchdown.

The scoring play, a 61-yard reception in the third quarter that put the Colts up 17-3, naturally inflated Rogers’ grade. Away from his touchdown, though, Rogers’ league-leading OSM score was built on the influence he had on Indianapolis being able to sustain drives.

Four of Rogers’ catches came on third down, and three of those receptions saw him move the sticks, with two coming on scoring drives. The key to his ability to keep drives alive was Rogers’ route depth and his awareness of where the chains were.

His first third-down conversion came in the second quarter on a drive that would end in a field goal for Indianapolis. Rogers ran his route to the sticks and displayed the contact balance to stay on his feet through an attempted tackle and fall forward for crucial extra yardage.

Later in the fourth quarter, with the score tied and momentum firmly with the Steelers, Rogers gave the Colts hope of a potentially decisive scoring drive with a six-yard gain on third-and-six.

Rogers had more separation to work with this time around as he broke back to the ball but, while it was a relatively simple throw and catch, it would not have gone for first-down yardage had Rogers not again demonstrated excellent situational awareness.

By making sure he caught the ball ahead of the sticks, Rogers made the defender’s efforts in tossing him back behind the line to gain immaterial as he had more than enough forward progress to bring up a new set of downs.

Those conversions were the foundation for a strong OSM grade, but it was a display of the agility that was evident when Rogers came out of college that elevated his performance to the elite level.

Rogers went undrafted in 2016 despite impressing athletically in pre-draft testing. Indeed, he posted a Relative Athletic Score (RAS) of 7.47 out of 10. RAS is a composite metric on a 0 to 10 scale based on the average of all of the percentile for each of the metrics the player completed either at the Combine or his pro day. 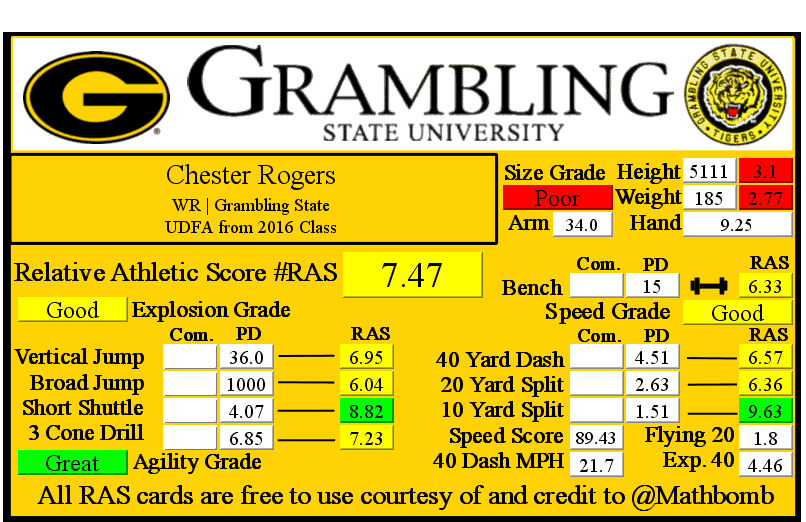 Where Rogers stood out was in the agility drills, earning a RAS of 8.82 for his efforts in the short shuttle at his Grambling State pro day and a score of 7.23 for his time in the 3-cone drill.

The agility he displayed at his pro day manifested itself on Rogers’ touchdown against the Steelers, which came immediately after a third-down he converted by picking up 10 yards on a short throw.

Rogers should have had a walk-in score; instead, because of an inaccurate throw from Brissett, a wide-open Rogers had to adjust to the ball and then show off his elusiveness in the open field to evade the deep safety and find the endzone.

The Colts could hardly have asked for more from Rogers, who outshone more heralded receivers in T.Y. Hilton and Donte Moncrief. He caught all his targets, was directly responsible for six points, and had a hand in a drive that ended in another three while giving Indianapolis opportunities to score more with his third-down conversions.

No Colts skill position player did more to influence their offensive production against the Steelers, and Rogers’ performance is one that teams still in need of wide receiver help should be studying closely.

A free agent with upside

Largely an afterthought for the Colts last season, Rogers finished a year that was curtailed because of a knee fracture suffered in Week 13 with 16 catches and made the most of them.

Rogers went for 179 receiving yards at an average of 11.2 yards per reception and found the endzone twice. That production tallies with what was gleaned from the tape of the 2017 meeting with the Steelers. Rogers has the talent to be a consistent contributor and often takes advantage of the opportunities that come his way.

Yet, Rogers was not signed in the opening waves of free agency and remains available on the open market. The injury he sustained may be a contributing factor, but, at 26, there is no reason to believe his athletic gifts should dwindle any time soon.

Rogers is unlikely ever to be a featured element of a team’s passing attack, but as a complementary piece, there is an intriguing upside. A look back at his top-ranked OSM performance from three seasons ago revealed a receiver who is dependable, agile, and plays with veteran awareness of where he is on the field.

His skill set merits more than a futile effort for a 4-12 team being the statistical highlight of his career. Rogers is a player with the ability to have a regular impact on a team’s offensive production. If one thing is to be taken from Rogers’ day in the sun, it is that he deserves the chance to have many more.

In this article:Chester Rogers, Indianapolis Colts