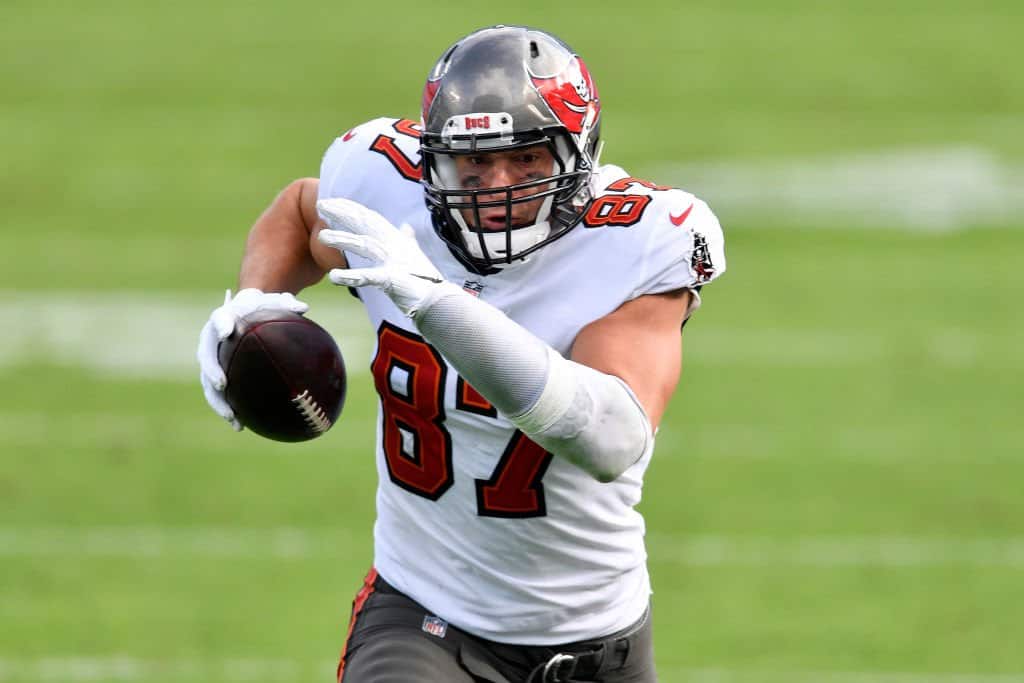 Time is running out on the 2020 fantasy football season, and the trade deadline is upon us. With Week 11 of the NFL season looming in the near future, finding those fantasy trade targets to both buy low and sell high on is imperative. Which players should you be looking to acquire now to help make your path to playing and winning in Weeks 15 and 16 all the easier?

2020 has been a tough season for Daniel Jones. He ranks 26th in Pro Football Network’s Consistency Score, having failed to throw for over 200 yards in four of his 10 games this season. Additionally, he has just eight passing touchdowns compared to nine interceptions.

However, Jones’ fortunes appear to be have been changing recently. He has topped 200 yards in all his past three outings, with three touchdowns to two interceptions. He has also added 88 yards rushing and a touchdown in those three games. That change in fortunes has come with a softening of his schedule in the second half of the 2020 season. He has also seen quite a bit of success when looking at Daily Fantasy Sports betting, where he has been in the top five in points scored in his last two games.

Jones is on his bye in Week 11, but his next three games all come against teams that rank in the top-12 in Pro Football Network’s Defensive Points Allowed Consistency Score (D-PAC), indicating all three allow consistently high fantasy points to opposing QBs. If you are looking to give your QB room a boost with an upside gamble heading into the fantasy playoffs, Jones could be one of the perfect targets to trade for in Week 11.

Another player who is having a tough 2020 season is Ezekiel Elliott. His -11% Fantasy Point Differential is the lowest of his career. That disappointment comes in the form of the lowest yards per attempt of his career at just 3.8. However, that is compounded by Elliott having the lowest attempts per game of his career. Not only is he seeing fewer opportunities in 2020, but he is also doing less with those opportunities.

However, there is the potential for things to take a turn for the better for Elliott. So often a player fantasy teams have looked to sell high on, matchups in Week 11 and Week 16 against teams that rank in the top-10 in terms of D-PAC to the position make Elliott a buy low option right now. Even the tougher matchups, Washington and Baltimore, have seen opponents such as D’Andre Swift and Damien Harris have good performances on the ground against them as recently as Week 10.

It has been a tough year for Baltimore, as quarterback Lamar Jackson has struggled to find consistency. One of the players who has underwhelmed as a result of those inconsistencies has been Marquise Brown, who has just two touchdowns through nine games after scoring seven in 14 games in 2019.

The young wide receiver is coming off a game against the New England Patriots in which he had just two receptions for 14 yards. The last three weeks have been a struggle for Brown, with just six receptions for 55 yards and a touchdown in that period. However, Brown has seen five or more targets in all but one game this season, meaning the potential is there. The Ravens are likely going to need to re-imagine this offense, and when they do, Brown needs to be a big part of that.

Games against the Titans, Cowboys, Browns, and Jaguars all present potential opportunities for Brown to make an impact in the crucial part of your fantasy football season. If you are already likely locked into the playoffs, that Week 15 matchup with the Jaguars could be worth the price of acquiring Brown all on its own.

The ups and downs of 2020 have made Engram a regular name on this list, and after a tough outing in Week 10, he is back again. Just three targets and 15 yards in Week 10 is a concern, but the expectation is that it was just a blip. Sure, the Giants have other weapons, but they have still been looking to Engram a lot recently. In the three games prior to Week 10, Engram had seen 29 targets for 155 receiving yards and a touchdown.

Left on his schedule are games against the Bengals, Seahawks, Cardinals, and Browns. All of those games should have the potential for big returns, with that Week 15 game against the Browns being especially important if you are turning an eye to the playoffs.

The key to making this trade in Week 11 will be threading the needle where you know you are making an offer that is a buy low, while the person you are trading with believes they are getting a sell high price on a player that was likely one of their targets entering the season.

For those of you that have been storing Jameis Winston on your bench, now is your opportunity. No, not to start him, but to sell high on the Saints potential starting quarterback heading into Week 11, while everyone else feels like they have a chance to buy low before he explodes on the field against the Falcons.

We do not know what Winson will look like for the Saints in Week 11 and beyond, which is why you should sell high. This is an offense predicated on the short pass, and there is no reason to believe they rip that up with Winston under center. We could also see a healthy dose of Taysom Hill, and it will only take an underwhelming Week 11 outing for Winston’s value as one of the top fantasy trade targets to sink like a lead balloon.

The only exception to this is if you have been storing Winston as a handcuff to Brees. In that situation, it is hard to imagine any price could be right unless you are stocked at the QB position.

In the past few weeks, I have been loading up on Booker on the waiver wire as his efficiency and opportunities have improved over the past few weeks. That culminated in a Week 10 performance that saw him carry the ball 16 times for 81 yards and two touchdowns. However, Week 10 was somewhat of a revenge game against his former employers, and with a blowout in progress, Jon Gruden may have given his second-string RB an early Thanksgiving gift.

Booker doubled his second-most carries on the season in Week 10. I do not expect that to continue. If you have been smart enough to pick him up in the past few weeks, Week 11 is an opportunity to cash in on a player many would never have expected to be among the group of desirable fantasy football trade targets in 2020.

Marquez Valdes-Scantling has had two games, against the San Francisco 49ers and the Jacksonville Jaguars, to remember. The Green Bay Packers wide receiver has turned 10 targets into six receptions, 202 receiving yards, and three touchdowns. Those are all fantastic numbers, but the circumstances make him a wonderful player to sell high on in a trade prior to Week 11.

In those two games, Valdes-Scantling scored 75% of his 2020 touchdowns, pulled in 27% of his 2020 receptions, and accounted for 44% of his receiving yards this season. Valdes-Scantling has a modest 22% Fantasy Point Differential in 2020, but in the last two weeks, he has seen his FPD rest at over 150%. That is an unsustainable number, especially with a return for Allen Lazard on the horizon.

Rob Gronkowski has been playing superbly; there is no doubt about that. In the last five weeks, he has 21 receptions, four touchdowns, and 234 receiving yards. However, there are reasons for concern when you consider the offense and his performances in the last two games.

The arrival of Antonio Brown, combined with the return to health of Chris Godwin, could create an opportunity vacuum for Gronkowski. He saw six targets against the Saints but was only targeted three times in the Buccaneers’ victory over the Panthers. Brady is still taking deep shots to him, which is promising, but there is a chance to flip Gronkowski for a tight end with a safer floor while also acquiring another useful piece.