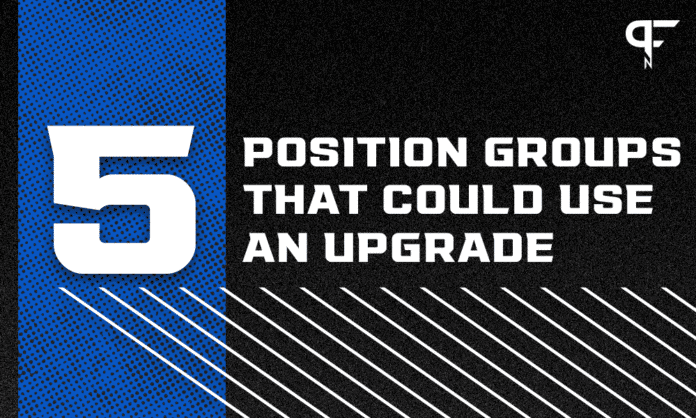 Which NFL positional group amongst playoff contenders needs the biggest improvement, and how should their teams address the sore spot?

A segment on “Get Up” piqued my interest the other day when Sam Acho said that the one thing that could keep the Buccaneers from repeating was the right side of the offensive line (Tristan Wirfs, anyone?). Everybody makes mistakes, and Acho’s are magnified on national television. But it made me wonder, what NFL positional groups are in desperate need of an upgrade?

We know the Detroit Lions need wide receiver help like an adolescent gamer needs Mountain Dew. We understand that the Giants’ offensive line is a mess. That’s not what we’re here for. What positional groups on contending teams, like the defending champions, need an upgrade before the regular season?

There isn’t just one team with a lackluster group of defensive backs. It’s important to note that this is based on teams I’m projecting to make the playoffs or narrowly miss out.

They’re far from the only NFL team vying for postseason prosperity that needs an upgrade at this positional group heading into the 2021 regular season. We’ll focus on one other team that could desperately use defensive back help. However, multiple teams could use CB assistance.

Janoris Jenkins is 32 years old. His running mate Kristian Fulton only played in 128 coverage snaps during the 2020 season, and he struggled. So, the Titans drafted Caleb Farley in Round 1 and Elijah Molden in Round 3 of this year’s draft. Both have found the learning curve to be quite steep. They’re firmly buried on the depth chart as of today.

Despite many teams needing cornerback help in a bad way, there’s always a chance that a bad day for a veteran cornerback on Tuesday could spell a bit of relief for the Tennessee Titans.

But the impending NFL cuts will not be the only way to address the issue. One team, in particular, has what is quite possibly the deepest secondary group in recent history. Now, two of those players are on one-year deals, and they also have a young player with promise buried on the depth chart.

If I’m the Titans trying to fix this positional group, I’m talking to the Denver Broncos about cornerbacks Bryce Callahan and Michael Ojemudia. Callahan has the flexibility to play in the slot or outside, despite his smaller frame. Vic Fangio loves Callahan, so the more realistic option might be Ojemudia, who would be cheaper.

It’s foolish to expect this team to make the playoffs. The Cardinals play in arguably the best division in the NFL, and they have likely the worst cornerback group in the division. That’s quite an accomplishment. The Seahawks certainly make a case, as do the 49ers.

Byron Murphy, Malcolm Butler, Darqueze Dennard, and Robert Alford are an underwhelming bunch. When Daryl Worley has the chance to be CB5, you know your roster is struggling.

General manager Steve Keim should be calling George Paton on the phone just like the Titans. Arizona has to face DK Metcalf and Tyler Lockett in Seattle, the RAC monsters in San Francisco, and the combination of Sean McVay and Matthew Stafford in Los Angeles. Good luck.

It’s been the same song and dance with this positional group for years. Safety and defensive tackle have been sore spots on this roster for a long time. However, they at least attempted to provide aid to the ailing back end. Still, 2020 third-round pick Neville Gallimore’s injury was a massive blow to the Cowboys’ defensive interior. Let that sink in.

It’s not quite a death blow. The Cowboys also acknowledged their linebackers played poorly in 2020, spending significant resources to improve there. Brent Urban, Carlos Watkins, and Justin Hamilton all bring some run-defending ability. Osa Odighizuwa has played admirably during the preseason. Quinton Bohanna is a freak for his size, but he still has a lot to learn before contributing consistently.

Nonetheless, as a whole, this defensive interior is uninspiring. It could certainly survive in 2021, but when paired with a lackluster defensive backfield, this defense will struggle to find average results.

The Seattle Seahawks are in trouble defensively

The Seahawks need help rushing the passer and defending the pass, which is a pretty bad combination.

You read that right. It was impossible to choose between the mediocrity that is the Seahawks’ group of pass rushers and cornerbacks. The truth is, Seattle needs all the help they can get on that side of the ball.

That’s not to say that Darrell Taylor, who has fantastic upside coming out of Tennessee, can’t improve to the point where the Seahawks no longer fiend for a pass rush like an infantryman does a cigarette after a gunfight. There just isn’t much outside of his upside that provides excitement from this positional group.

Jamal Adams is their edge rusher. That’s cool, but that also takes him away as a coverage player and forces him into the box, limiting the looks the defense can show the offense. They let Jarran Reed walk to Kansas City, making Benson Mayowa their next leading pass rusher. They need help.

Ahkello Witherspoon played well in a limited role with the 49ers, so we’ve at least seen flashes from him. Pete Carroll has been complimentary of Tre Flowers during camp. They drafted Tre Brown and acquired D.J. Reed, both smaller cornerbacks.

Seattle’s troubles come more from a combination of the two sore spots. So, if they address only one, it could be enough to propel this defense high enough for Seattle to be a legitimate contender in the NFC.

With the weapons surrounding Tua Tagovailoa, all the offensive line must do is survive. It doesn’t need to be outstanding — it just can’t be a turnstile. Unfortunately, that’s easier said than done, and with the lack of quality OL play in the NFL already, this might be one of the positional groups amongst NFL contenders that cannot be improved this season.

Even if Tua doesn’t start for 17 games, the team needs to see improvement along the offensive line. The offense hummed along nicely during the preseason. Still, when things get ratcheted up in the regular season, it’s tough to imagine an offensive tackle duo of Austin Jackson and Jesse Davis sufficing.

If the Dolphins miss the playoffs in 2021, the offensive line will most likely be the culprit.