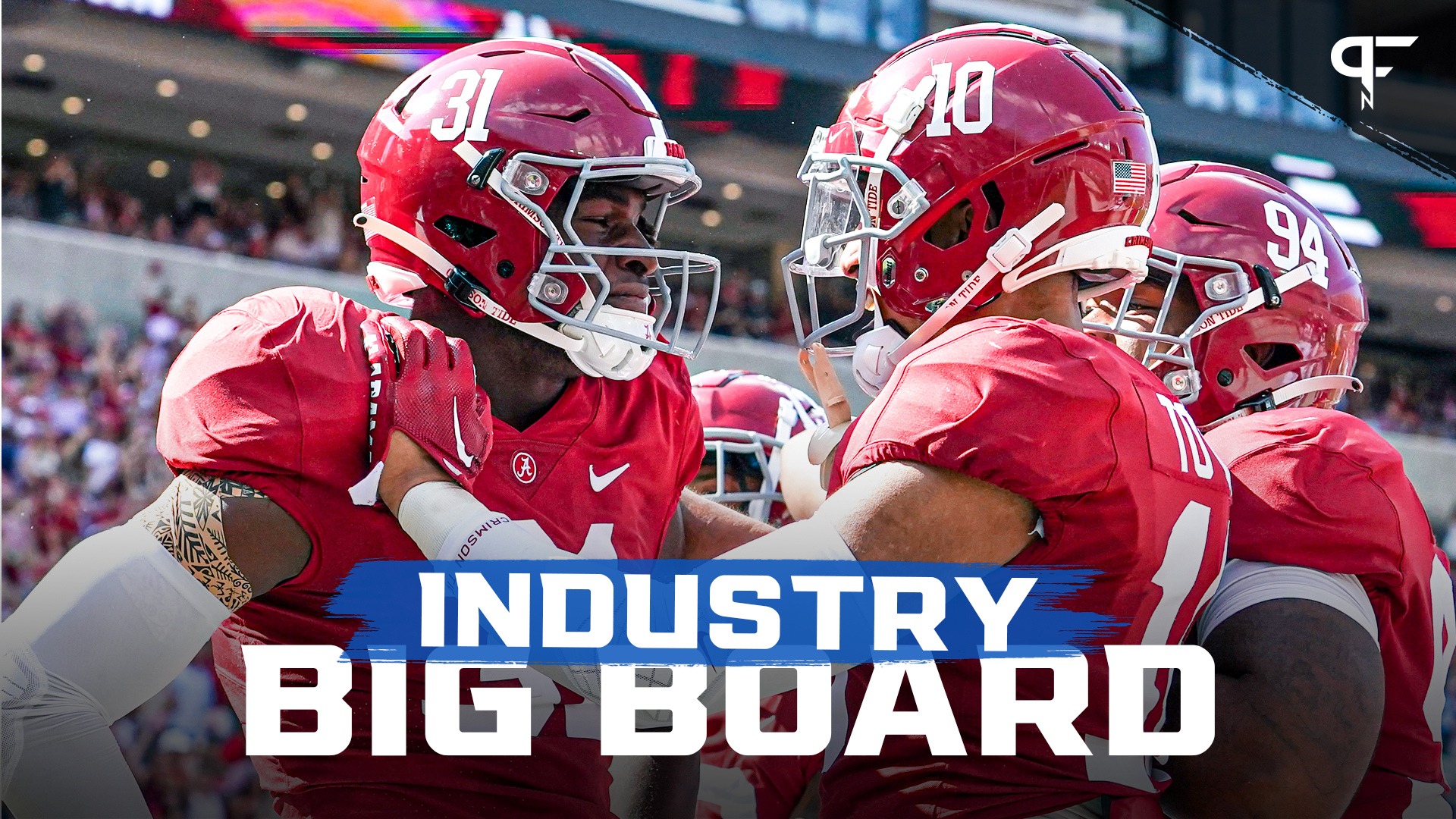 The 2023 NFL Draft Industry Consensus Big Board includes 25 different boards and breaks down the top 100 prospects after the college season.

The 2023 NFL Draft Industry Consensus Big Board includes 25 different boards and breaks down the top 100 prospects just before the major events of the All-Star circuit.

Every year, I put out a big board that features the consensus of opinions from draft analysts worldwide, condensing the industry’s rankings into one board that represents the feeling, at large, on each year’s prospects.

What I’ve never done before is keep an updated ranking throughout the draft season to get a gauge on which players are rising, falling, or just entering the conversation. This year, that changes.

The PFN Mock Draft Simulator features hundreds of prospects, scouting reports, and free trades -- jump into the mock draft machine and get ready for the 2023 NFL Draft.

The Pro Football Network consensus 2023 NFL Draft Big Board is live with the consensus thoughts from PFN's team of draft evaluators.

Industry Consensus Big Board: What It Means

I’ve compiled rankings from 20 different boards around the industry. By the 2023 NFL Draft, that number will grow beyond 85. For now, that means the top 100 players ranked instead of the top 300, which we’ll have by the time the draft rolls around.

This method has historically done a fantastic job at predicting where players will go in the draft, telling which players are the most polarizing, explaining how different kinds of experts evaluate different types of prospects, and anchoring our discussions on the NFL draft.

This early in the draft cycle, however, we might see unusual stuff. Not every draft board included in the rankings this early was updated at the same time. People roll out their analyses at different dates throughout the year, and this version includes boards updated from late November through early December.

As we continue to update this board, we’ll drop any boards that are over a month old and add in any new ones that might have fresh insight. That way, we can best keep track of player movement until the 2023 NFL Draft rolls around in Kansas City.

How To Read the Industry Consensus Big Board

You might notice some unusual positional designations as you read through the chart. “DL1T” refers to nose tackles, “DL3T” refers to defensive tackles with more pass-rushing responsibility, and “DL5T” refers to players who can play 3-4 defensive end or could be either an edge rusher or interior pass rusher. We also have nickel corners listed as NCBs, which represents who will primarily be expected to play in the slot.

2023 Senior Bowl Practice Winners: Tyjae Spears and Nathaniel ‘Tank’ Dell Stand Out Most at Their Positions

Who were the positional winners at the 2023 Senior Bowl practices, and who helped improved their NFL draft stocks the most?
Draft

How Are the Senior Bowl Teams Chosen?

The Reese's Senior Bowl has established itself as an excellent opportunity for NFL Draft prospects, but how are the players selected for the event?
Draft

What Channel Is the 2023 Senior Bowl On?

One of the top college football all-star games is back, and we've got the Senior Bowl channel and live stream options, so you don't miss a minute.
Draft

The Senior Bowl takes place on Saturday, Feb. 4. Learn about the members of the NFL Network broadcast crew for the event here.
Load more
MISSION