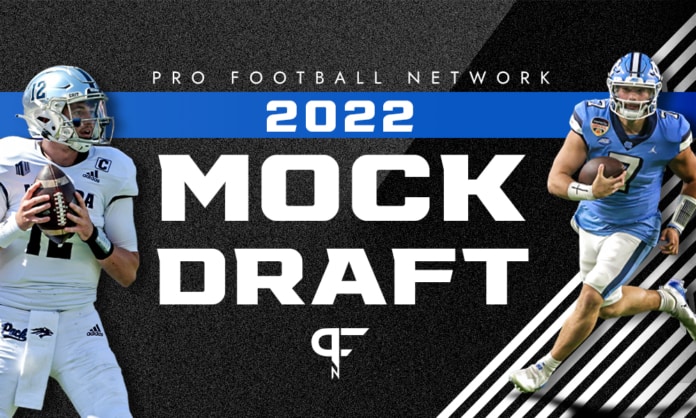 As we change up the 2022 NFL Mock Draft process to look at the scenario if the season ended today, defense dominates the top three selections.

We are reaching the point where fans of several teams will turn their attention to 2022 NFL mock drafts with a little more realism than pessimism. With nearly 25% of the season in the books, let’s take a look at what positions teams around the NFL might be considering when it comes to the NFL Draft next year.

Previously, all our 2022 NFL Mock Drafts have been based on the predicted draft order according to sportsbook odds. However, with nearly a quarter of the season gone, let’s take a snapshot in time of how the draft might look if the season ended today. The order below and the tiebreakers that led to it can be found on our 2022 NFL draft order page.

Which players will the teams picking in the top half of the 2022 NFL Draft select in our mock?

The Jaguars have invested three first-round selections in the last four years in pass rushers. However, entering Week 5, no team in the league has fewer sacks than the Jaguars’ 5. Getting pressure on the QB has not been a problem, but actually getting him down has been.

Therefore, if the Jaguars continue on this path to the first overall selection, another pass rusher could be in the cards. If that is the case, Oregon DE Kayvon Thibodeaux makes perfect sense.

The Lions have so many holes on their team that they really have no choice but to trade down if there is no home run selection. However, in this mock, we are ignoring trades for the time being and just looking at who the team might select in the situation.

Therefore, with the 31st-ranked pass defense in terms of net yards per attempt, the Lions either need to look up front or at defensive back. With Thibodeaux off the board, LSU CB Derek Stingley Jr. is a logical selection here.

When you look at the Jets’ roster, two areas scream for help — offensive line and defense. Not just one defensive position, the entire defense. If Stingley or Thibodeaux is on the board when they are on the clock, they need to run that card to the podium. If not, then Drake Jackson makes a solid third option to bolster their pass rush.

The Eagles desperately need help on defense, but with the potential of two early first-round picks, they can cover multiple potential needs. The Eagles’ offensive line is old, and the left side is filled with uncertainty. Evan Neal has the potential to come in and start Week 1 at either tackle position.

The 2022 NFL Draft’s QB1 discussion is very much up in the air. While Sam Howell has not hammered home the feeling entering the year that he would be the top selection at the position, he’s still a player that many people believe can succeed at the next level.

Matt Ryan is not the problem in Atlanta, but he’s also not the long-term solution. Atlanta does need to address the defense, but they also need to try and secure their future at QB.

As it stands, we have yet to see the consensus OT1 for the 2022 class fully emerge. Nevertheless, the Colts’ biggest need in this 2022 NFL Mock Draft is finding their future left tackle. Perhaps in an ideal world, if there is no consensus candidate for a top-10 selection, they would trade down.

However, right now, Sean Rhyan is one of the top candidates to be that first tackle selected. He’s NFL-ready physically, and any deficiencies in his game as a rookie could be masked playing alongside a talented quartet — assuming they are healthy.

There is so much to address with the Texans it is hard to know where to start. What happens with Deshaun Watson this season and into next offseason will really shape their draft situation. Yet, right now, it’s clear they need a long-term solution at QB. Malik Willis has the raw talent to be that solution.

The Patriots love their hybrid-type players, and Kyle Hamilton would give them another chess piece to utilize. New England could line Hamilton up in a variety of spots and further improve an already impressive defense. Another option here could be to go with an offensive tackle, but the value is not right this high in the draft.

The Eagles’ defense has just been absolutely blown apart by the Chiefs and Cowboys. The Eagles will see Dak Prescott and the high-powered Cowboys twice a year, meaning a top-level CB is a crucial addition. Kaiir Elam would be a perfect fit with the ninth overall selection.

As the fifth-worst team in terms of pressure rate on opposing QBs, the Giants need to address their pass rush in the 2022 offseason. George Karlaftis would make for an ideal addition on the outside and boost that unit. The only question mark here is whether Daniel Jones’ play in 2021 means this has to be a selection on a QB.

The Vikings have so many needs that it’s hard to know which direction to go. Defense has to be the focus, and with Patrick Peterson only on a one-year contract, CB might be the priority. Andrew Booth Jr. perhaps profiles a touch lower than this in terms of skill set, but with so much need at CB in the 2022 NFL Draft, he could yet be a top-10 selection.

As I referenced earlier, there is a lot still left to shake out in the 2022 QB picture. However, the player that could climb the board is Carson Strong, who is having a somewhat under-the-radar season. The Steelers need to find a replacement for Ben Roethlisberger in the draft, and Strong very well could be the solution.

This might seem early for Nicholas Petit-Frere, but it is an almost perfect fit from a needs standpoint. The Dolphins took a chance on a raw talent in Austin Jackson, and it has not worked out.

Petit-Frere is generally viewed as a more polished prospect, but his upside is not seen to be as high as Jackson’s was. Then again, the potential is only useful if you can reach it.

In an ideal world, the Jets would focus on the defense in its entirety with the 2022 NFL Draft, but in this mock, we do not have that luxury. The Jets’ offensive line is among the worst in the league. While the left side has a solid foundation, the right side does not. That is where Kenyon Green comes in as a potential solidifying piece at right guard.

The Saints might very well be without Michael Thomas in 2022, and with no other clear WR1 on the roster, they likely need to address the position early in the draft.

With both Ohio State wide receivers on the board, they could have their pick. Chris Olave is marginally superior in my eyes, but whichever way the Saints went here would not be a surprise.

The Giants desperately need to address one of the worst offensive lines in the league. They need help at multiple positions across the line, and Tyler Linderbaum injects potential into the interior OL. Linderbaum is an athletic interior offensive lineman who could be an incredible asset in the run game.