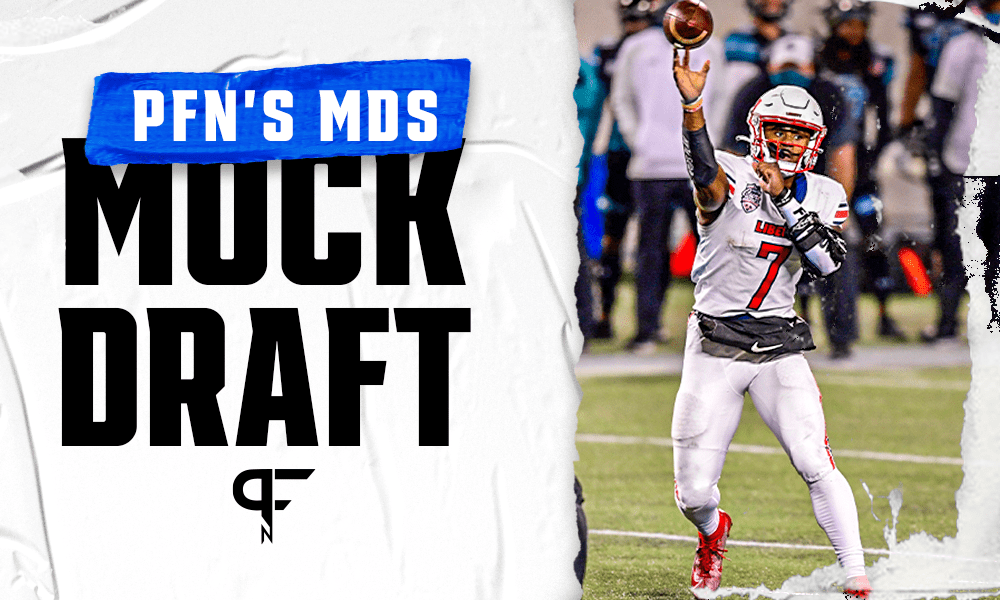 In the latest 2022 NFL Mock Draft from Pro Football Network's Mock Draft Simulator, how does the first round play out in Las Vegas?

The 2022 NFL Draft is still nine months away, but it is never too early to start looking at mock drafts. While the players being drafted might change, mock drafts at this stage allow us to look at what gaps teams might fill when April rolls around. Let’s take a look at our second 2022 NFL Mock Draft using Pro Football Network’s Free Mock Draft Simulator.

The draft order was determined by the current Las Vegas odds on the 2021 NFL standings.

Assuming this season plays out the way we are all expecting and Deshaun Watson is not on the roster, a quarterback has to be the target for the Texans. The debate over the top two will likely rage all season, but the development of Spencer Rattler in the second half of the season was a promising sign. After another strong season in Oklahoma, he takes the relatively short trip to Houston to begin his pro career.

With Rattler going first overall, Sam Howell will be playing in blue again in 2022. If the Lions are selecting here next season, we have to assume Jared Goff struggled. Then again, even if he didn’t, is he really the long-term answer in Detroit? Sean McVay certainly did not think so in Los Angeles.

The Jaguars may hesitate for a second here over whether to add a top-tier cornerback to their roster. However, passing on a talent like Kayvon Thibodeaux would be considered a crazy decision. A trio of Thibodeaux, Josh Allen, and K’Lavon Chaisson would be terrifying for every offensive line they face for the foreseeable future.

Unless some big improvements are made in 2021, the Jets’ cornerback room deserves a great deal of attention. Assuming Zach Wilson and the other offensive additions gel this year, the defense will need to be the focus next offseason. Derek Stingley Jr. easily could be the starting cornerback for the Jets in Week 1 of the 2022 season.

Where the Bengals focus their attention next offseason will depend on how Joe Burrow handles the concerns with his offensive line. If he struggles, Cincinnati will have to target either a guard or tackle to give their franchise QB some stability. Yet, in this 2022 NFL Mock Draft, let’s assume the offense was solid but the defense let them down. A combination of Kyle Hamilton, Vonn Bell, and Jessie Bates III would be an incredibly dangerous trio for opposing quarterbacks to account for.

A few areas of the Eagles’ defense raises concerns, but their linebacker group really lacks the top-end talent many teams employ. While spending a pick this high on a linebacker is always questioned, Christian Harris would immediately become the defense’s central figure for at least the next five years.

Regardless of who is under center or how Andrew Thomas plays at left tackle, the Giants need to add to their offensive line next offseason. They have some pieces to test out this coming season, but if they need to address the position, Evan Neal would be a solid pick out of what has become an offensive tackle factory in Alabama. Additionally, if Thomas struggles, Neal can play left tackle and Thomas can kick across to the right side of the line.

When you look at the Falcons’ defensive line, it is clearly an absolute disaster heading into 2021. Even if Dante Fowler Jr. improves his play in 2021, Atlanta needs a player opposite him who can make a difference. Drake Jackson could be just that for Fowler. Regardless, Jackson has the talent to be a featured pass rusher if the Fowler experiment fails.

This is another case of assuming that if the Panthers are selecting in the top 10, their QB situation did not work out. Sam Darnold is locked in as a two-year starter, but if it is clear after one year, the Panthers could jump on the exciting QB out of Liberty, Malik Willis. Willis can compete with Darnold in camp or sit early in his career while the Panthers hope to salvage some value out of Darnold.

With two potential selections in the top 10, the Giants could completely revamp their offensive line. Adding another elite prospect alongside Thomas and Neal would potentially give this group the foundations of a line they can build around for the next 5-10 years. A group of Kenyon Green, Neal, and Thomas could eventually rival Dallas’ trio of Tyron Smith, La’el Collins, and Zack Martin as one of the top offensive line trios in the league.

The Broncos added Patrick Surtain in the 2021 NFL Draft, and they could go back-to-back with first-round corners by adding Kaiir Elam in this 2022 NFL Mock Draft. Kyle Fuller was signed to fill a role in 2021 but may not have a long-term future in Denver. Putting two young premier cornerbacks together could provide the foundations for an incredible defense once again in Mile High.

The situation in Las Vegas is fluid. This could easily be a quarterback selection if Derek Carr does not impress. Equally, the offensive line could be in focus if Carr impresses but the line struggles. Yet, when you look at the defense, there are a lot of holes that need filling. That starts up front — there is a clear void of talent that would be fixed immediately with the addition of DeMarvin Leal.

Arizona has a potential out with both D.J. Humphries and Kelvin Beachum’s contracts in 2022. Even if they keep both on the roster, they are set to be free agents in 2023. Regardless of which scenario occurs, adding a potential franchise left tackle on a cheap rookie contract is always a smart move with two players set to be free agents. Charles Cross may not be the sexy selection that Zaven Collins was, but securing the protection for Kyler Murray in 2022 and beyond will pay dividends.

With a loaded defense, the offense should remain the focus of the Washington Football Team’s attention. In this 2022 NFL Mock Draft, they add another tantalizing receiving option in Garrett Wilson. The other intriguing thing about adding Wilson would be that Washington would have three former Ohio State receivers: Terry McLaurin, Curtis Samuel, and Wilson.

The Vikings added some intriguing pass-rush options in the 2021 NFL Draft, but there is uncertainty over the future of Danielle Hunter. If Hunter were to leave, the Vikings would need a No. 1 pass rusher to build their defense around. George Karlaftis suffered an injury in 2020 but posted 7.5 sacks and 17 tackles for loss in 12 games in 2019.

After the pass rush was seemingly set with Joey Bosa and Melvin Ingram, the Chargers are now hunting for an edge rusher. Zach Harrison could be an intriguing foil for Bosa but needs to produce results in his junior season after having a limited impact on the stat sheet so far in his college career.