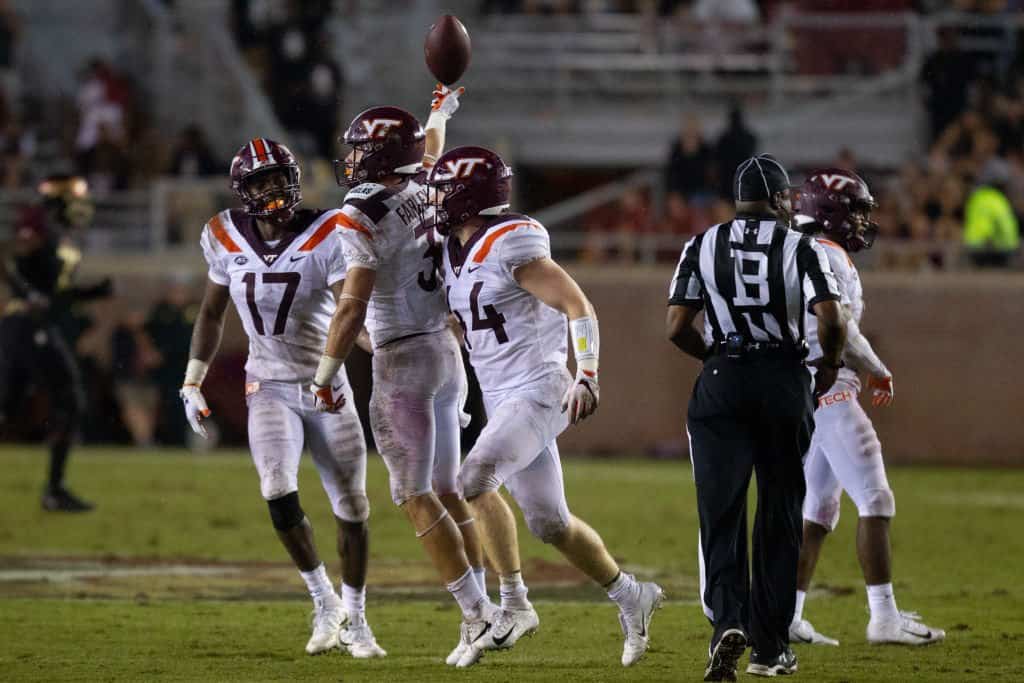 If you watched Georgia’s bowl game, then Azeez Ojulari was likely a name that stuck out to you. Ojulari played superbly in that game, continuing a strong season, which has built momentum into the draft.

Adding Ojulari would give the Raiders an explosive pass rusher alongside the likes of Clelin Ferrell and Maxx Crosby. A rotation with those three you pass rushers will allow the Raiders to move on from Carl Nassib if they need to save the cap space.

The Miami Dolphins defense was superb as a whole this season. However, their pass rushing group was made up of a number of players on short-term deals. By keeping Gregory Rousseau in Miami, they can give themselves a young pass rusher who will have plenty of veteran knowledge to learn from.

Rousseau is also capable of lining up inside and making plays as an interior rusher. On passing downs, he could be a valuable contributor early in his rookie season.

Washington desperately needs a playmaker in the middle of their defense. Jeremiah Owusu-Koramoah offers them exactly that as a hybrid linebacker-safety type player.

Washington would be able to use him in a multitude of ways. He can be used in the role of covering backs, tight ends, and slot receivers, but he can also be a valuable playmaker against the run. He has 24.5 tackles for loss and seven sacks in his two-year career, proving he can be multi-dimensional.

The cornerback position was a serious concern for the Broncos and one they need to address. The good thing for them is that if a team is looking to move up, they can drop back and still get one of the top options around this point in the draft. In this first-round 2021 NFL Mock Draft, they get Jaycee Horn out of South Carolina.

Horn projects well as an outside corner with his long frame. He is also a physical corner but does have some issues with attempting to jump plays. Learning from a veteran cornerback like A.J. Bouye, assuming he is not cut, is a perfect introduction to the NFL.

Alijah Vera-Tucker is a solid pick for a Colts team who struggled at times with their offensive line this season. As a team looking to build around a young running back in Jonathan Taylor, Vera-Tucker would be a solid addition.

The benefit here is that, to some extent, the Colts get the luxury of bringing Vera-Tucker in and then letting him slot where he fits best. He has played both tackle and guard at USC, so while he gets comfortable with the NFL, the Colts can put him where they feel fits best.

Getting after the passer was an issue for the Titans in 2020. While there is a slight drop off in edge rushers at this point, the Titans could bolster the interior of their line. They have Jeffery Simmons but adding another force on the inside like Barmore is valuable.

With Simmons and Barmore, teams would have trouble rushing the ball on the interior of the Titans defense. Additionally, the Titans would also have two players commanding attention on the interior, giving their edge rushers more space to work.

The Jets have a few options here, but the priority should be supporting Sam Darnold. The options include investing in the offensive line’s interior, adding a receiver, or going after a running back. I am a big believer that a running back needs a solid offensive line to work behind if he is to succeed.

Therefore, the priority should be to continue improving the interior. Wyatt Davis is a player who has shown well in 2020. He is a mobile blocker who has a great combination of power and the ability to move. Combine Davis with Mekhi Becton and Slater — the Jets have the pieces of a respectable offensive line starting to fall into place.

The Steelers are going to have a lot of questions this offseason. One of their potential cut candidates is center Maurkice Pouncey. Pouncey made headlines for all the wrong reason in the Steelers’ 2020 playoff loss and could have played his last game in Pittsburgh.

The talented Humphrey could come in and be the centerpiece of the Steelers line as they look to transition to a younger team seamlessly. The Steelers could also be in the market for a trade up for a QB if they move on from Ben Roethlisberger and his sizable contract, or if Roethlisberger decides to call time on his career.

With the first pick of our first-round 2021 NFL Mock Draft, the Jaguars got their QB, and now they add the centerpiece of their defense. Zaven Collins has made some splash plays in 2020, which has seen him rise quickly up draft boards. Collins finished his career at Tulsa by claiming the Bronco Nagurski Trophy, awarded to the best defensive player.

His skill set makes him a versatile piece in the middle of any defense. He can drop into coverage, step up against the run, or even rush the passer. He is a perfect piece for the Jaguars to build around on defense.

The Browns are in a tricky position with Odell Beckham’s injury. If he cannot pass a medical before the third day of the league year, his contract becomes fully guaranteed. However, if he does pass a medical, the Browns can cut him with no dead money.

Whether Beckham is on the roster or not, the Browns need to consider the future at the position. With Beckham and Jarvis Landry commanding huge cap numbers in the next two years, getting a receiver to develop in 2020 is a good start.

Rashod Bateman can be the replacement for Beckham, either in 2021 or 2022. He will offer a central figure in the passing game for Baker Mayfield and come at a cost-controlled number for the next few seasons.

Another Florida team could look to keep a player in the state in the draft. The Buccaneers have Shaq Barrett set to hit free agency in 2021, using the franchise tag on him in 2020. Additionally, Jason Pierre-Paul only has one season left on his deal, meaning the Buccaneers need a plan for the future.

Jaelan Phillips is an ideal candidate to be that future. He has the flexibility to play out of both 3-4 and 4-3 fronts, with the power and athleticism to get after the quarterback. He could be a natural replacement for Barrett or be set up to step in for Pierre-Paul in 2022.

All season this is a pairing I have had in my notebook. The Ravens have built their team around a strong defense, and they have players set to depart in free agency this offseason. Ronnie Perkins fits the role that the Ravens need to fill this offseason perfectly.

Honestly, some may see it is as a reach for Perkins, but this feels like one of the perfect matches in this first-round 2021 NFL Mock Draft. However, do not be shocked to see the Ravens move back if they feel they could get Perkins in the early second round.

With Jared Cook set to hit free agency in 2021, the Saints could be looking for an immediate replacement. They already have Adam Trautman, but adding Pat Freiermuth alongside Trautman gives them flexibility at the position.

He needs to work on his blocking in the NFL, but he has the frame and athleticism to be a successful tight end at the next level. With Drew Brees’s future unknown, Freiermuth could be a fascinating piece if the Saints decide Taysom Hill is the QB in 2021.

We could see teams jumping around at the bottom of the first round in order to try and get the edge rusher they most covet. If the 2021 NFL Draft plays out this way, the Bills will likely be happy to get Patrick Jones.

Jones has much potential and can be a contributor both rushing the passer and against the run. The Bills’ defensive line has been an issue in 2020, so it is certainly a place they will look to add playmakers this offseason.

The conversation around the Packers every single season revolves around them addressing their passing offense. However, we have seen that Aaron Rodgers can play at an MVP-caliber level without the Packers boosting the offensive weapons around him.

Therefore, the Packers can focus on the back end of their defense. They have Jaire Alexander but lack a true second option opposite him. Thomas can come in and play that solid second cornerback role that is absolutely crucial for any contender in the current NFL. The end of the first round might be a touch early for Thomas, so look for the Packers to be a contender to trade out of the first round if CB is their aim here.

Several options could fit here for the Chiefs, but the offensive line should be the focus. They have a few offensive linemen hitting free agency, but they could also be looking to move on from Eric Fisher. The Chiefs are projected to be over $10 million over the salary cap. They can free significant cap space by releasing Fisher.

What I like about Alex Leatherwood for the Chiefs is his potential flexibility. If the Chiefs decide to keep Fisher, then Leatherwood has the ability to play on the inside. His versatility could be a real asset for a Chiefs team looking to challenge for a Super Bowl again in 2021.