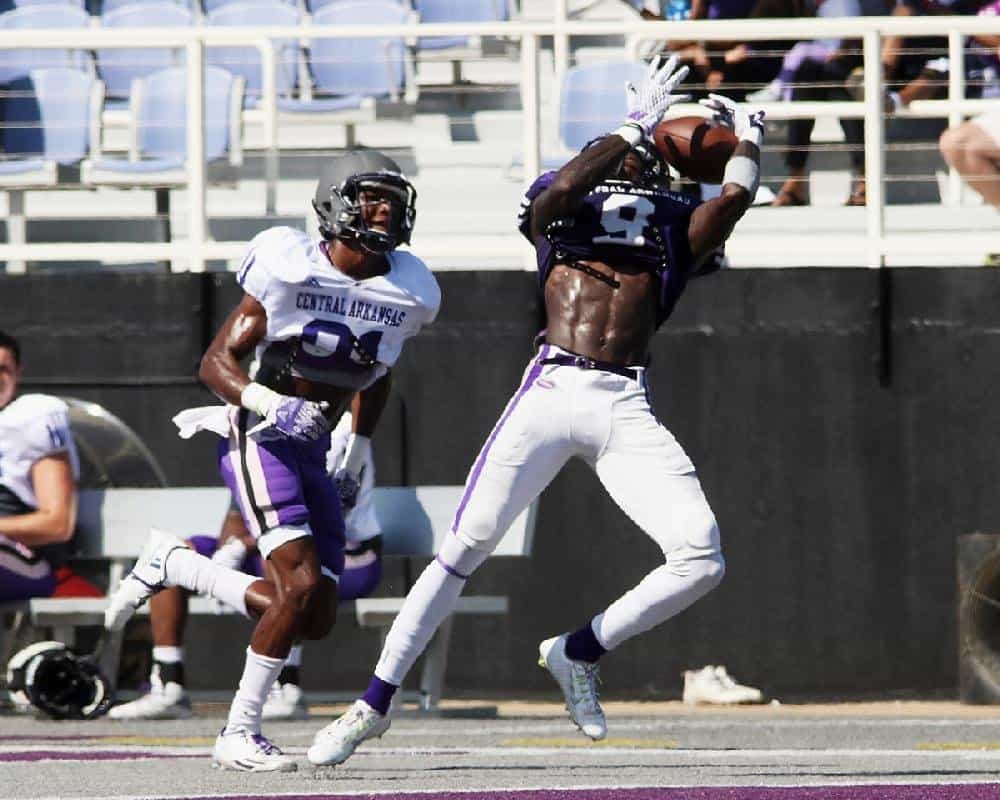 It’s widely accepted that the most prestigious schools in college football are the ones who score the top athletes during the recruiting season. Some schools simply have a knack for attracting NFL talent and developing it consistently. But the truth is, a talented athlete can come from anywhere. Such is the case with Central Arkansas CB Robert Rochell, an unheralded FCS prospect who has the profile to go pro.

Rochell played high school football at Fair Park in Shreveport, Louisiana, playing as many as seven positions in his time as a varsity athlete: Quarterback, running back, wide receiver, cornerback, safety, linebacker, and return man.

Rochell’s all-encompassing stat line bode well for his prospects as a Division I athlete. However, despite attending a workout at LSU’s campus where he logged a sub-4.4 40-yard dash time, Rochell would end up signing with the Central Arkansas Bears. He’d also trim down his roles, to only one: Defensive back.

Rochell had the tools necessary to succeed at cornerback from the start: Height, length, speed, and agility. But he’d never had the chance to hone in on one role and perfect his craft in a specific area. College football at Central Arkansas allowed Rochell to excel at CB, and so far, he’s hit all of his marks and exceeded them.

After redshirting in 2016, Rochell hit the field as a redshirt freshman in 2017 and immediately made an impact, logging one interception and seven pass deflections in rotational duty. In 2018, he expanded on that production, amassing four interceptions, ten pass deflections, and three tackles for loss.

14 total plays on the ball underscored an impressive campaign for Rochell, but in 2019, he’d blast those numbers out of the water, as if they were pedestrian. Rochell started all 11 games at cornerback in 2019, putting up five interceptions and a whopping 18 pass deflections.

Rochell was named a first-team All-American in the FCS for the first time and also became a first-team All-Southland Conference selection. Now, with Jeremy Chinn moving on to the NFL, he’ll presumably battle with Sam Houston State’s Zyon McCollum for the title of “ballhawk of the FCS.”

One could call Rochell an undiscovered gem, but it seems as though he’s close to being discovered. Bruce Feldman’s “Freaks” list tipped the nation off to Rochell’s insane athletic parameters — parameters which include a 4.38 40-yard dash time, 41-inch vertical jump, 140-inch broad jump, and 3.98-second short shuttle time, all at 6-foot-1, 197 pounds.

To say Rochell is an elite athlete would be an understatement. According to Pro Football Network draft analyst Chris Spooner, Rochell’s athletic numbers, were they to hold strong through the 2020 NFL Combine, would give him a Relative Athletic Score (RAS) of 9.99. That would make Rochell the highest-testing cornerback of all-time.

Yeah, all-time. And they said the FBS had all the athletes.

Rochell passes the numbers test, in several different ways, but his film will be of ultimate interest to NFL scouts come the 2021 NFL Draft. Rochell has to put up more production in 2020, but as it stands, he has enough flashes on tape to warrant consideration well before the later rounds.

Check out this play below, where Rochell, lined up at the top of the screen, displays the elite explosiveness necessary to sprint out of his backpedal and close in on the out-route. He also shows a willingness to tackle, squaring up, and stopping the pass-catcher in his tracks before he can get to open space. He’s not just a stat-sheet filler; he’s willing to get physical.

Robert Rochell (@scootaa11) might end up being the first FCS player drafted. Really long arms and has great speed for his size. Also love how he is a fighter and is a willing tackler. A true shutdown CB, who has all the tools to succeed in the NFL. #NFLDraft #DraftTwitter pic.twitter.com/FmIE7QsS8r

Where Rochell will shine in 2020

Of course, Rochell’s most marketable ability in 2021 will be his ability to generate turnovers and other game-changing plays. That’s what the eyes are drawn to after catching a glimpse of his athletic numbers and statistical production. Throughout his three-year collegiate career, he’s amassed 10 interceptions and 35 pass deflections, and that’s no accident.

The clip above showed Rochell’s willingness to get physical at the catch point, which undoubtedly helps him produce plays on the ball. But his athleticism also helps a great deal.

Here, Rochell is able to haul in an uncatchable ball due to his vertical explosiveness, body control, and midair focus. Rochell’s physical tools put him in a position to make plays that other defensive backs can’t, and that unique potential will have defensive coaches salivating on the second and third days of the draft.

DB coaches always instruct to become the receiver when the ball is in the air. @UCA_Football CB #9 Robert Rochell (@scootaa11) took it to heart on this play vs WKU. Rochell has that coveted length #NFL teams desire & is 1 reason why he’s high on the @NFLPABowl list!#BearClawsUp pic.twitter.com/0fWqJt7z6z

It’s always hard to predict where FCS prospects might be drafted, but it’s safe to say the book is out on Rochell now. He’s no longer a gem waiting to be uncovered, but instead a known, exciting prospect, under the watchful eye of scouts, who are anxious to see if he can keep improving after a career year.

Rochell has the athleticism and the ball production, and even if he falters in 2020, his resume as it stands should grant him a chance at the NFL level. But if Rochell can keep expanding off of his elite foundation, he can rise into the early-round conversation, and reinforce the building notion that the FBS does not have a monopoly on talent.