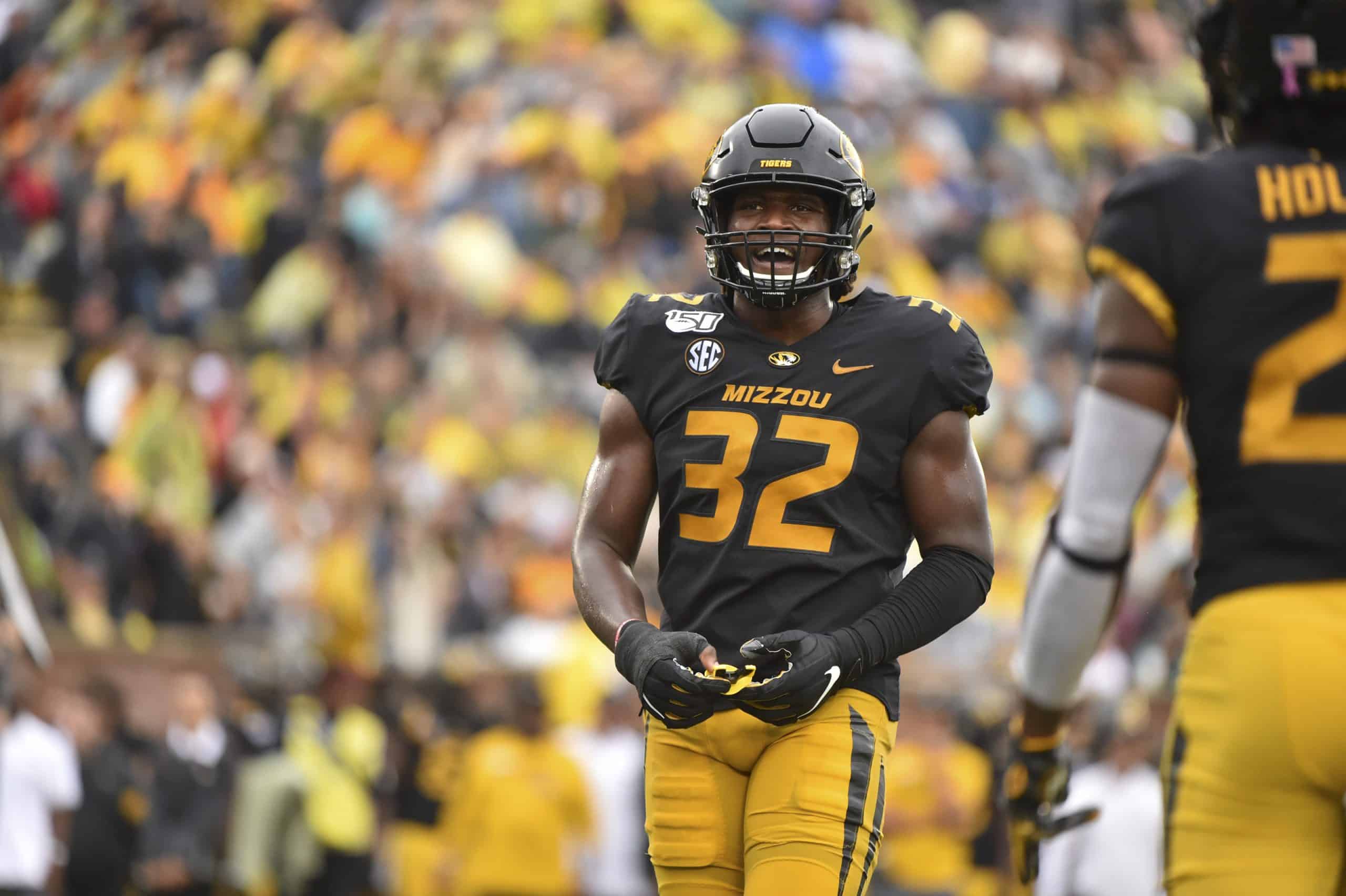 COLUMBIA, MO - OCTOBER 5: Linebacker Nick Bolton #32 of the Missouri Tigers in action against the Troy Trojans at Memorial Stadium on October 5, 2019 in Columbia, Missouri. (Photo by Ed Zurga/Getty Images)

The 2021 NFL Draft class appears to be one of the best groups we have seen enter the NFL ranks in quite some time. The class offers three high-level franchise quarterbacks in Clemson’s Trevor Lawrence, Ohio State’s Justin Fields, and North Dakota State’s Trey Lance. Also, the draft class presents a potential historic group of wide receivers, a boatload of quality offensive linemen, and a marvelous safety group. With that said, there are three underrated prospects who deserve more attention from the draft community.

The three players that come to mind are first-round talents, who are falling victim to deep positional groups. It’s something we see every year, talented players being overlooked by bigger names from bigger programs.

Let’s use the 2019 NFL Draft as an example, where Mississippi wide receiver A.J Brown was selected by the Tennessee Titans with the 51st pick of the draft, and the Seattle Seahawks selected wide receiver D.K. Metcalf with the 64th pick. Both receivers were selected after the likes of Oklahoma’s Marquise “Hollywood” Brown and Arizona State’s N’Keal Harry, yet both experienced more productive rookie seasons.

The three underrated 2021 NFL Draft prospects that are not getting enough attention are also players that might not carry the most noticeable names for their positions but just might deliver the most impact.

The headliners of the 2021 linebacker group are Penn State’s Micah Parsons and Alabama’s Dylan Moses. Both prospects are tremendous players but don’t sleep on Missouri’s Nick Bolton.

Bolton played his high school football at Lone Star High School in Frisco, Texas, where he was a three-star prospect. In 2018, as a true freshman, Bolton earned significant playing time in all 13 games.

However, it was his 2019 season that put his name on the map. In 2019, Bolton posted 103 tackles, including 8.5 tackles for a loss, one sack, two interceptions, seven passes defended, and a defensive touchdown. His outstanding play led him to be named first-team All-SEC by the Associated Press.

There are many aspects of Bolton’s game to like, highlighted by his exceptional football intelligence. He plays with a non-stop motor, possessing the range and instincts to make plays all over the field. Bolton brings a physical brand of football to the table, which is evident in his ability to lay the lumber. He is a disciplined open-field tackler and is one of the best coverage linebackers in college football. In fact, Pro Football Focus ranked him as the best coverage linebacker in the nation in 2019.

Pro Football Network’s Matt Valdovinos is also a fan of Bolton, stating: “He possesses elite sideline-to-sideline speed and functions as a positive against both the run and the pass. Bolton should already be in the conversation for a first-round selection and makes a very nice consolation prize for any team that missed out on the top two linebackers.”

When I said that Bolton could lay the lumber, I wasn’t kidding. The clip below will highlight his ability to deliver powerful hits.

The Missouri Tigers have a top 3 LB in college football and nobody talks about him man.

What are the concerns with Nick Bolton?

Due to his size and average strength, Bolton too often struggles to get off of blocks. This is something that doesn’t concern me too much, as a full NFL training program will make him a stronger player, which will help a great deal. Also, while Bolton is an adequate athlete, he doesn’t possess the jaw-dropping traits that a Micah Parsons will bring to the table.

The verdict on Nick Bolton

It is hard to imagine a scenario that doesn’t end with Missouri linebacker Nick Bolton being a first-round pick in the 2021 NFL Draft. On tape, he is clearly the third-best linebacker in the draft class and offers a true plug-and-play option. The worst-case scenario for Bolton would be a top-50 selection, but the tape screams first-round talent. You won’t find Bolton, an extremely underrated draft prospect, in many early mock drafts, but when the dust settles, he will be a high pick in the 2021 Draft.

With the likes of LSU’s Ja’Marr Chase, Purdue’s Rondale Moore, Minnesota’s Rashod Bateman, and Alabama’s duo of Jaylen Waddle and DeVonta Smith, the 2021 wide receiver group has a chance to be special. While all the names I mentioned are brilliant prospects, one extremely underrated draft prospect belongs on that list as well, and his name is Tamorrion Terry.

Terry is one of the best big-play wide receivers in all of college football. During his tenure in Tallahassee, Terry achieved a Florida State-record five touchdowns of 70-plus yards and another nine touchdowns of 50-plus yards.

As I mentioned in my piece on the top Florida State NFL Draft prospects in 2021, Terry brings a highly intriguing skill-set to the table. He is an alpha at the position, highlighted by his nature to fight for the football when it is up for grabs. He provides a remarkable catch radius and can make defenders miss in the open field.

Terry, one of the best contested-catch receivers in college football, has as much upside as any wide receiver in this draft class. He is a legitimate and consistent big-play threat. Take a look at the clip below, where Terry’s elusiveness is on full display, as he takes a simple slant to the house for a score.

What are the concerns with Tamorrion Terry?

There aren’t many concerns that surround a player who catches a touchdown once every 5.59 receptions, but there are a couple of areas for Terry to improve. First, he needs to maintain his focus. There are times when Terry will drop catchable passes, simply because he is thinking ahead on what he is going to do after the catch, rather than focusing on securing the reception. Also, he needs to broaden his route tree. This will come with NFL coaching, but it’s never too early to get a head start.

The verdict on Tamorrion Terry

Tamorrion Terry has the build and traits to blossom into an upper-echelon “X-receiver” at the next level. He has the size and big-play ability that NFL front offices search for. A wide receiver-needy team selecting toward the end of Round 1 such as the New Orleans Saints or Green Bay Packers would be ideal landing spots for Terry.

While Alabama’s Patrick Surtain II and Ohio State’s Shaun Wade grab the headlines, South Carolina’s Jaycee Horn might just be the best cornerback in the 2021 class.

Horn, the son of former New Orleans Saints’ wide receiver Joe Horn, is proof that the box score can lie. While he has accounted for zero interceptions during his time at South Carolina, Horn possesses borderline elite ball skills.

In 2019, Horn accounted for 40 tackles, nine passes defended, two forced fumbles, and a sack. He has 22 career starts under his belt, demonstrating superior length and fluidity to his peers. He was born to play “press-man” coverage in the NFL. However, he offers the ability to play the slot as well. One of my favorite traits in regards to Horn is his fearlessness in supporting the run.

His arsenal of physicality, impressive change of direction, coverage skills, and confidence, paired with his long frame, makes him an exciting 2021 draft prospect.

He might not have a bunch of interceptions during his college career, but there is no denying that Jaycee Horn is a playmaker. Watch him effectively blitz, avoid the block, secure a sack, and force a fumble in the clip below.

Corners that can blitz>>>>

South Carolina’s Jaycee Horn(#1) comes in from the left side of your screen, avoids the block, and gets the sack and his second forced fumble of the game. pic.twitter.com/qd2pFxHdNC

What are the concerns with Jaycee Horn?

Zero interceptions. Teams and scouts will see that statistic and see that is negative, but the box score doesn’t tell the whole story. Simply put, Horn isn’t challenged often because teams are afraid to throw his way. When teams do decide to throw his way, Horn gets his hands on a lot of footballs and not many passes are being completed.

The verdict on Jaycee Horn

Jaycee Horn just might be the best cornerback in the entire 2021 class, so he is one of the most underrated draft prospects for 2021. Horn, a true alpha at the position, consistently showcases the ability to mirror the opponent’s top receiving option. He is the total package when it comes to the cornerback position, and after another stellar season, Horn will secure his status as a top-20 selection.