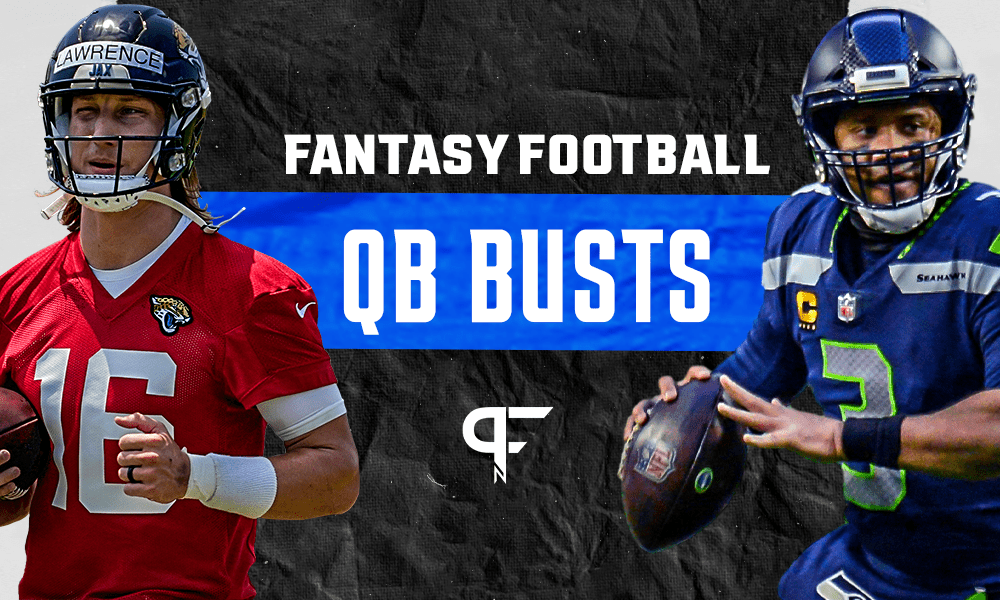 With the ability to stream the position, QB busts don’t usually play an integral part in 1QB fantasy football leagues. On the contrary, in superflex and 2QB formats, QB busts could destroy your team altogether. Which quarterbacks stand out as ones that you may want to avoid in 2021 fantasy drafts?

Even in redraft leagues, it’s not surprising to see Trevor Lawrence‘s fantasy stock continuing to climb. We knew he would be the No. 1 pick for two years, and there’s excitement set in to see him take an NFL field for the first time. With that said, expectations in his first year should be tempered but, according to his ADP in fantasy redrafts, they’re not.

Lawrence is all the way up to QB9 with a seventh-round ADP in 1QB leagues. Asking a rookie to be a top-10 QB is asking a lot — even when they are the first overall pick. Even if Lawrence shines in his rookie season, at best, he finishes as a top-10 fantasy QB to return the value of where he’s being drafted. It’s quite the gamble for a pennies-on-the-dollar return when several question marks surround the Jaguars’ offense in 2021.

Most of those question marks surround another rookie — first-year head coach Urban Meyer. Although he’s a legendary coach at the collegiate level, Meyer will have to prove he deserves to work the Sunday sidelines. Furthermore, he’s been away from coaching for a couple of years now.

Above all, Lawrence is in a good spot for his development. He has his teammate from Clemson, Travis Etienne, with him, along with top receivers like Laviska Shenault Jr., D.J. Chark, and Marvin Jones to help him get accustomed to the offense. In the long run, he’ll be terrific. But growing pains are a part of the process. Thus, I struggle to see Lawrence delivering as a QB1 in his first season.

Which QBs from the NFC stand out as potential busts this coming season?

Russell Wilson is one of the elite quarterbacks currently in the NFL. And in the first half of 2020, it showed in his fantasy production. From Weeks 1-9 (eight games), Wilson was the QB3 in fantasy football. He was second amongst QBs at 29.52 fantasy points per game in that span, behind only Kyler Murray. The second half of the year, however, was a different story.

At the end of the day, the Seahawks want to be a running team and will take the ball out of Wilson’s hand at any moment. They did the exact same thing in 2019 when in Weeks 1-8, Wilson was the QB2 and third in average at 23.29 fantasy ppg. Sound familiar? In the latter half of the year, he averaged 18.42 ppg and was the QB14 the rest of the way. Talk about déjà vu.

Wilson’s mobility will always be a luxury in fantasy football. And he’s already shown that when the ball is in his hands, he can be the QB1 in all of fantasy football. Unfortunately, if he hasn’t been allowed to cook for a full season to this point, it’s unlikely to occur starting now.

Matt Ryan is an interesting player for fantasy. Normally, I’d be all over a quarterback linked to a high-powered offense. After all, I love Kyle Pitts for 2021 — even as a rookie tight end. You won’t find me arguing with anyone that believes Calvin Ridley could be the WR1 in fantasy this season. Meanwhile, Mike Davis is a solid option at RB and a steal at his current ADP (102.4). Still, the one throwing them all the ball leaves a lot to be desired.

To play devil’s advocate, Ryan could be seen as a bargain at QB17. Since 2016, he’s been a QB1 every year except one (2017 – QB15) and finished as the QB2 in two seasons during this span. Last season, he finished as the QB12, with an average of 18.34 fantasy ppg. He’s thrown at least 608 pass attempts in each of the last three seasons, indicating he should again coast to a top-12 QB finish.

However, there are a few changes in Atlanta heading into the 2021 season. First, Arthur Smith is now the head coach. You could’ve penciled in that Ryan’s streak of 600+ pass attempts is coming to an end as soon as the announcement was made. Smith did help Ryan Tannehill in Tennessee, but the Titans’ offense was built and featured around Derrick Henry. The Falcons, obviously, don’t have a Henry on their roster, but Smith’s hire initially boosts the Falcons’ backfield more than it does Ryan.

Then, of course, Julio Jones was traded to Tennessee. Even with Jones on the team, Ryan has struggled throughout his career to throw touchdowns. He’s thrown 30 or more in just three seasons and 26 or fewer in three of the past four years. Pitts will surely help in this area, but in the short-term, this hurts more than helps Ryan’s fantasy outlook for 2021.

It’s hard to call Ryan a bust at his ADP. Nevertheless, there are sure to be fantasy managers that will draft him higher to be their QB1, which is a mistake. Ryan is a nice streaming option and a good QB2 option in superflex or 2QB formats, but I wouldn’t view him as anything more in 2021.