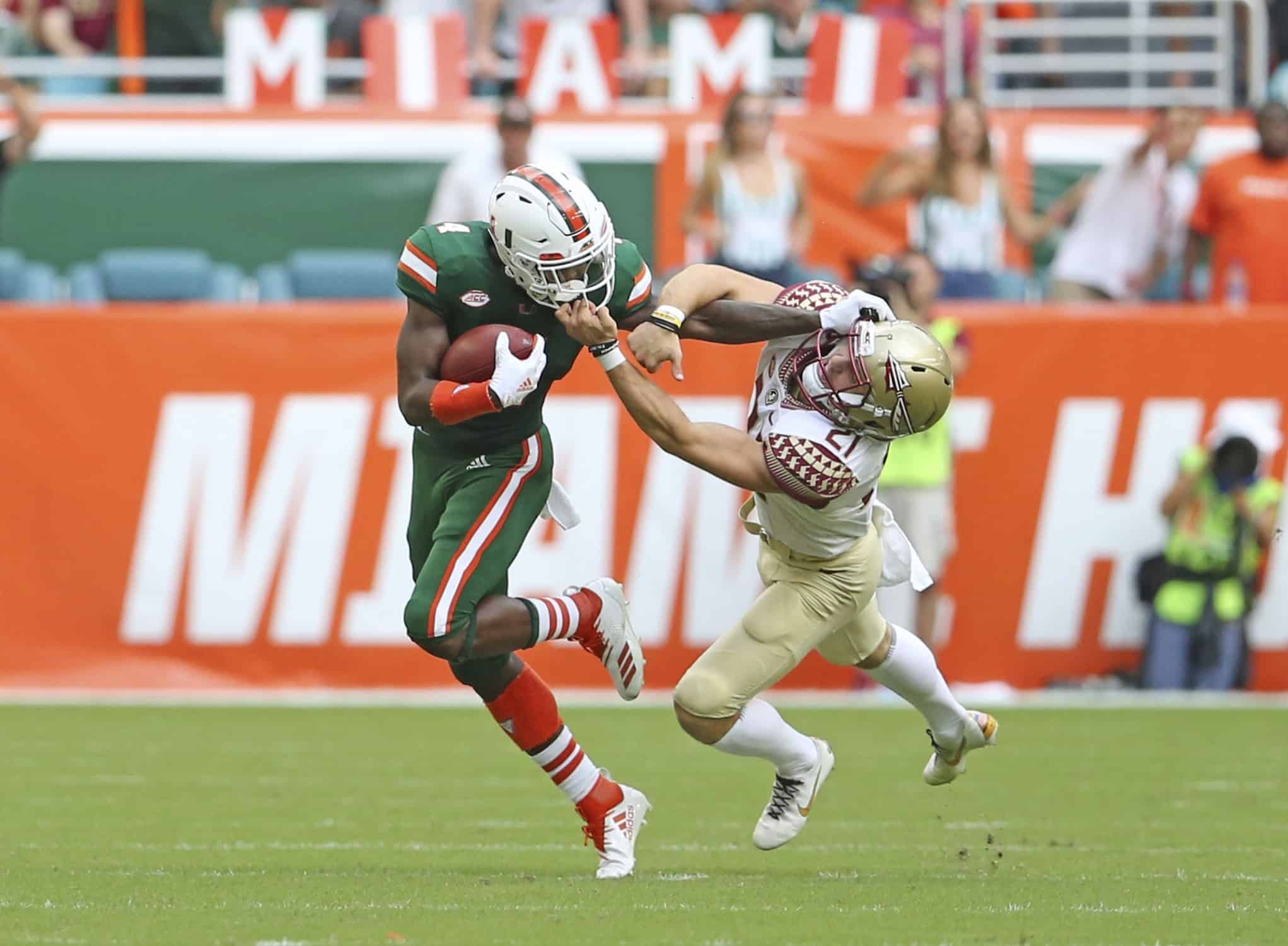 The 2020 NFL Draft is less than a year away and the prospects of the ACC are under the microscope. It is a talent show of players each and every year, with 2020 being no exception. But there’s something particularly special about the upcoming draft class.

After two weeks of intense review, first covering Virginia’s quarterback and then Syracuse’s dominant pass rushers, it’s obvious how good the talent can be. And it’s only become more apparent this week. I chose to watch wide receivers in the ACC, and there’s a plethora to choose from. While many will point to Clemson’s Tee Higgins, there’s more talent beyond just that one big name. Using a poll on Twitter, I was able to narrow my film review to three potential 2020 NFL Draft prospects. Those names include Jeff Thomas, Emeka Emezie, and Tamorrion Terry.

The diminutive Thomas may stand at a mere 5’10” and 170 lbs, but he’s a tenacious player on the field. While he demonstrates adequate speed for the NFL level, his change of direction, and dexterity are up there with the best of them. His consistency in running his routes is apparent, as he’s not relegated to only deep shots down the field. In theory, Thomas is a do-it-all weapon. He’s a threat in space, not simply relying on his agility in the open field, but consistently displays toughness by churning through contact as well.

The Miami Hurricanes receiver is a bonafide threat heading into the 2019 college football season with the pedigree to boot. He was the number one rated football player coming out of the state of Illinois in 2017. Thomas went on to average a startling 22 yards per catch his true freshman season and followed it up with a 16.1 yard per catch average despite doubling his catches.

Unfortunately, it wasn’t all perfect for Thomas. Former Miami head coach Mark Richt dismissed Thomas from the team last season as a punishment for “not taking care of business off the field.” New coach Manny Diaz welcomed him back with open arms after a meeting, and now Thomas can finish what he started.

A quality route runner who consistently shows physicality through his route, and excellent ball tracking skills with solid hands, Thomas has the potential to be a day one or two draft pick in the 2020 NFL Draft. Fortunately for him, high profile QB Tate Martell is eligible this year, so Thomas could elevate his performance easily with steadier play under center.

Emezie is similar to Thomas in that he’s a true junior heading into 2019. However, that’s about where the similarities end. Emezie is a rock-solid prospect listed at 6’3”, 210 lbs. That frame is apparent on every single down. Emezie is probably one of the most physical receivers I’ve seen in the college ranks thus far. He possesses consistent hands, good ball tracking skills, body control, and his route running is solid.

What stands out most, however, is Emezie’s open field ability. He runs like a running back, making plays in space but never shying away from lowering his shoulder through a defender. This shows up on tape consistently, as he’s brought down many a time by a group of defenders rather than just one.

Ranked far lower than Thomas in terms of positional rankings coming into college. While Thomas was the fifth-ranked receiver in the nation, Emezie was the 80th ranked receiver in the same 2017 recruiting class. That background has done nothing to hold back his potential though. Emezie, in an offense that featured now NFL receivers Kelvin Harmon and Jakobi Meyers, Emezie still racked up 53 receptions, 616 receiving yards, and 5 receiving touchdowns. That’s outstanding production considering the talent ahead of him.

The biggest challenge heading into 2019 for Emezie is living up to what he put on film last year. Along with two receivers leaving for the NFL, Emezie will no longer have Ryan Finley, who was drafted by the Cincinnati Bengals. Emezie will have to show he can be an NFL-caliber player with a new face throwing him the ball. If he does so, Emezie will easily be in the conversation for the first three rounds come the 2020 NFL Draft.

Tamorrion Terry is also a member of the 2017 high school football recruiting class. Ranked 52nd at his position in the nation that year, Terry is almost a combination of Thomas and Emezie in terms of stature. Listed at 6’4”, 203 lbs, Terry boasts excellent height for the position. He possesses a long, lean frame, but his playing strength is top notch. His speed is exceptional, as he’s a constant deep threat in combination with his size. In addition, he has the jump skills to make him a huge concern for defenses.

What really stands out about Terry’s game is how well-rounded he is. Sure, he’s the long, lean, speed demon on the perimeter, but he runs every bit of the route tree and is a threat at all levels of the field. His aforementioned play strength shows when he’s fighting through contact for passes. This happens pretty often considering his speed. Defensive backs sometimes can’t help but place their hands on him to stop the big play.

To go with this, Terry has a habit of body catching, but he maintains the awareness to secure the pass before attempting for yards after the catch. He’s shown consistently that even through contact he can snag the ball and hang on for positive yards. His film will leave prospective NFL offensive coordinators salivating. Thus far, he’s my favorite receiver for the 2020 NFL Draft.

FSU WR Tamorrion Terry was a bright spot in a down year for Florida Statehttps://t.co/Pdticqg0KA pic.twitter.com/bJI4c0UwnK

Can he live up to the hype?

For the 2019 season, it will be interesting to see Terry replicate the statistical performance he notched last year. On just 35 receptions, Terry logged a whopping 744 receiving yards for a 21.3 yards per catch average, cementing him as a certified big play waiting to happen. However, Florida State recently dismissed their former incumbent QB, Deondre Francois. This leaves James Blackman, the former backup, to take the reins as the starter. Common sense would lead some to believe that losing Francois would mean a downgrade in performance by the Seminoles.

Fortunately, Blackman is talented in his own right and has seen the field plenty of times, first as a starter in 2017, and in four games last season. Terry will no doubt be a major asset for Blackman, and vice versa. With good play under center, along with a quality running game with the talented Cam Akers, Terry could exceed his performance from last year. Even though he’s a redshirt sophomore in 2019, we could see his stock rise high enough for him to leave after 2019.

Altogether, this group of receivers was recruited in the same high school class, and find themselves in comparable positions. All three will see different quarterbacks throwing them the ball, and all three enter their second year as a starter full of promise. All three prospects have the potential to be early selections next April, but at the very least, they should hear their names called at some point in the 2020 NFL Draft.

–Felix Davila is a writer for PFN covering the ACC for their NFL Draft coverage. He’s also editor of the AFC North writer team. You can follow him @DavilaFootball on Twitter.-