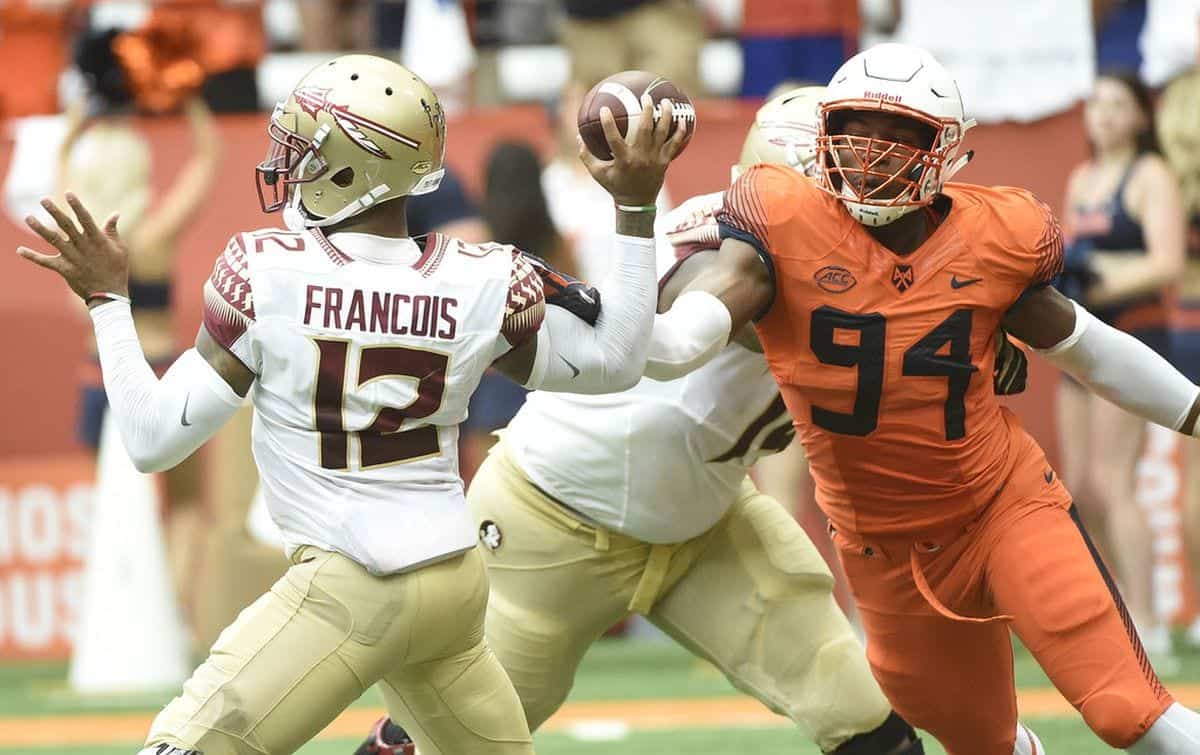 Photo Credit: Syracuse.com
What's in this article? Click to show
Tough road for the ACC pair
2020 NFL Draft stock of the new “New York Sack Exchange”
Draft analysts will have an Orange crush

The Atlantic Coast Conference (ACC) felt the might of Syracuse University football in 2018. The Orange reached new heights, finishing 10-3 and a surprising second in the ACC. Syracuse was behind only the eventual champion Clemson Tigers. But the key to their elevation as a program has been driven by two players: EDGE defenders Alton Robinson and Kendall Coleman. The duo has endured their share of trials to get to this point but maintain the potential to truly become dominating players in 2019, while securing high 2020 NFL Draft stock.

Tough road for the ACC pair

In 2016, Syracuse University didn’t have a clue who Alton Robinson was. The young defender from San Antonio, Texas was a chiseled phenom that garnered the attention of many powerhouse programs. Although Texas A&M University seemed to be his eventual home, it all changed in the blink of an eye in February 2016.

Alton Robinson was arrested and charged with second-degree robbery. The police reported that he allegedly stole his then girlfriend’s purse, shoved her to the ground, and eventually left the purse behind after running off with her cell phone in hand. He was arraigned on $20,000 bond. Robinson’s reputation was tarnished extensively, with people in the area believing the news and then some.

Just like that Robinson’s world came crashing down. But after the charges were dropped, he decided to enroll in a fresh program: Northeastern Oklahoma A&M College. It was here that he was able to reestablish his talent and persona, eventually earning his second shot with Syracuse University and head coach Dino Babers. Babers was convinced of not only Robinson’s talent but his ability to rebound from what was a brief downfall. Ultimately, that was a good call. Robinson has racked up 15 sacks in his two years at Syracuse to go with 23.5 tackles for loss.

In 2016, Kendall Coleman was the second overall rated defensive end in the state of Indiana, and the 31st ranked overall in the nation. He was a well-regarded defender, voted team captain along with defensive most valuable player his senior year. Coleman’s potential was through the roof when he landed in the ACC. He pushed into the starting lineup immediately, playing in all 12 games that year with 11 starts. Things were looking up. ‘Cuse head coach Dino Babers attributed Coleman’s fast rise as a starter to relentless work ethic.

But things weren’t so peachy in 2017. Retaining his starting position, Coleman suffered a foot injury early in the season that shelved him for four games. Coming back from it, he endured a “broken thumb and pulled ligament” according to his mother via the Daily Orange. Then he tore his labrum at the end of the season. It crushed Coleman to the point of quitting football entirely. In the same interview, his mother stated that in a text, he expressed his wishes. But with advice and support from family, and a lot of thinking, he decided to work twice as hard. That resulted in a career-best 2018, with 10 sacks, his first double-digit year.

Robinson and Coleman are a formidable pass rush duo not often seen at Syracuse University. Football fans will think of Chandler Jones and Dwight Freeney when considering successful alum but that’s where the list ends. Outside of those two, ‘Cuse has only produced two other NFL draft picks at the position since 1992. That will most likely change come to the 2020 NFL Draft.

The duo presents good talent, but in different ways. Essentially, the two have adapted their games to their respective body types, as all athletes should. They’ve each spent considerable time honing their skills and it definitely shows on the field. Each player wins at the point of attack in their own way, but both use techniques to their advantage well.

Alton Robinson is a long, athletic EDGE player that understands that his length is a major asset. Listed at 6’4″, 257 lbs. on the Syracuse football team page, Robinson makes it a habit to keep opposing offensive lineman off the inside of his frame to maximize his lower body power. Pairing this with excellent hand placement, and an understanding of leverage mixes to create havoc at the snap.

Yet another disruptive clip. Robinson again times the snap, reacts to the RT well to keep his inside shoulder low, then quickly shoots his left arm to throw the RT off balance. Tears his set to shreds. pic.twitter.com/5z4qMK1CY7

Robinson is routinely able to time the snap well and uses his arm length to power through opposing tackles. He also shows a surprising amount of bend at that length, which is a coveted trait.

Another example here of Robinson’s first step & speed off the edge. Top of screen: Most impressive part about it is the arc in his path to the QB. It looks smooth, there’s lean, and he maintains his speed from his get off thru the entire arc. A 3 man rush accomplished its goal. pic.twitter.com/JjMfVDZlDY

Robinson shows excellent short area quickness to handle a wide angle but presents the power to win with bull rushes along with the body control to counter on inside assignments. Robinson’s awareness on the field is exceptional as well. Time and time again, he sniffs out the run, setting the edge well enough for his teammates to swarm. Additionally, he demonstrates discipline in handling read-option concepts, often successfully stuffing the ball carrier. It’s ideal to have a balanced game that won’t pigeon hole him into a situational role, and Robinson has that. With a strong motor and good athleticism, he’s bound to duplicate or exceed his 2018 season success this fall. Robinson has first-round promise heading into the 2020 NFL Draft.

My original intent was to dive into the film for Robinson, but I came away enamored with Kendall Coleman as well after seeing him pop off the tape. A different frame and player, Coleman is more compact, listed at 6’3″ and 252 lbs. Coming into the ACC, he wasn’t as big or as powerful. The Daily Orange reported that he looked like a linebacker in 2016 and could bench press 225 lbs only two times. He’s come very far from that small frame and it shows on film.

Here’s a better, closer angle of the play. Notice he’s, again, using his low center of gravity, that shoulder dip and lean, but more importantly demonstrates the power to keep his path without being overpowered. Excellent rep. pic.twitter.com/66V4FZ4h7Q

Technique completely describes Coleman’s game. He maintains his power through contact, leans into his respective offensive lineman, but churns his legs through to hit his target. He’s exceptional at the double move off the snap, frequently countering inside and using his leverage to win.

Below, you can see Coleman wins with first step quickness again, fakes the inside move, understands leverage based on body positioning, but has the core and lower body strength to maintain his path through contact with the lean and leverage. pic.twitter.com/jQjqyQXNLD

He plays with outstanding awareness and tracks the ball well across the field. Like Robinson, he’s able to quickly diagnose and react to plays fast enough to disrupt them in the backfield.

Just look at his reaction timing. He and Robinson play with their heads on fire. I love the attacking nature of their game. pic.twitter.com/XrtAR8mbAM

Overall, despite not boasting the same frame as Robinson, Coleman is still a consistent winner from down to down. He’s a powerful defender with the obvious core strength to plow through opposing blockers.

Draft analysts will have an Orange crush

The combo of Robinson and Coleman is a nasty one. Their success is a strong reason why Clemson, the top 2018 ACC team and eventual 2018 national champion, had headaches in their showdown with Syracuse. What’s truly apparent is both players not only have the talent for highly regarded 2020 NFL Draft picks, but they lead by example with their insatiable work ethic.

“On Aug. 23, 45 minutes after the final practice of training camp ended, only Robinson remained on the field. He attacked a dummy in full pads. Blood trickled down his leg from a cut opened during practice. Over and over, from the left and right sides, he practiced different moves, working on his hand positioning, footwork, explosiveness and finishing.”

“It was to make up for lost training camps, he said.”

“He redoubled his efforts in the weight room and in film review, poring over technique and alignment. He focused on strengthening his upper body to incorporate more power pass-rushing moves into his arsenal. This winter, he tallied 17 reps of 225 on the bench press.”

One thing for certain about these two monsters on the Syracuse defensive line is their motivation to be the best they can be. Having the accolades is ideal, but it’s nothing without a burning desire to compete with the best and eventually claim the title of best. But, after both players suffered through near premature conclusions to their football careers, there is no doubt both ACC linemen will leave it all on the field and earn themselves deserved attention for the 2020 NFL Draft.

-Felix Davila is a writer for PFN covering the ACC for their NFL Draft coverage. He is also the editor for PFN’s AFC North coverage. You can follow him @DavilaFootball on Twitter.-