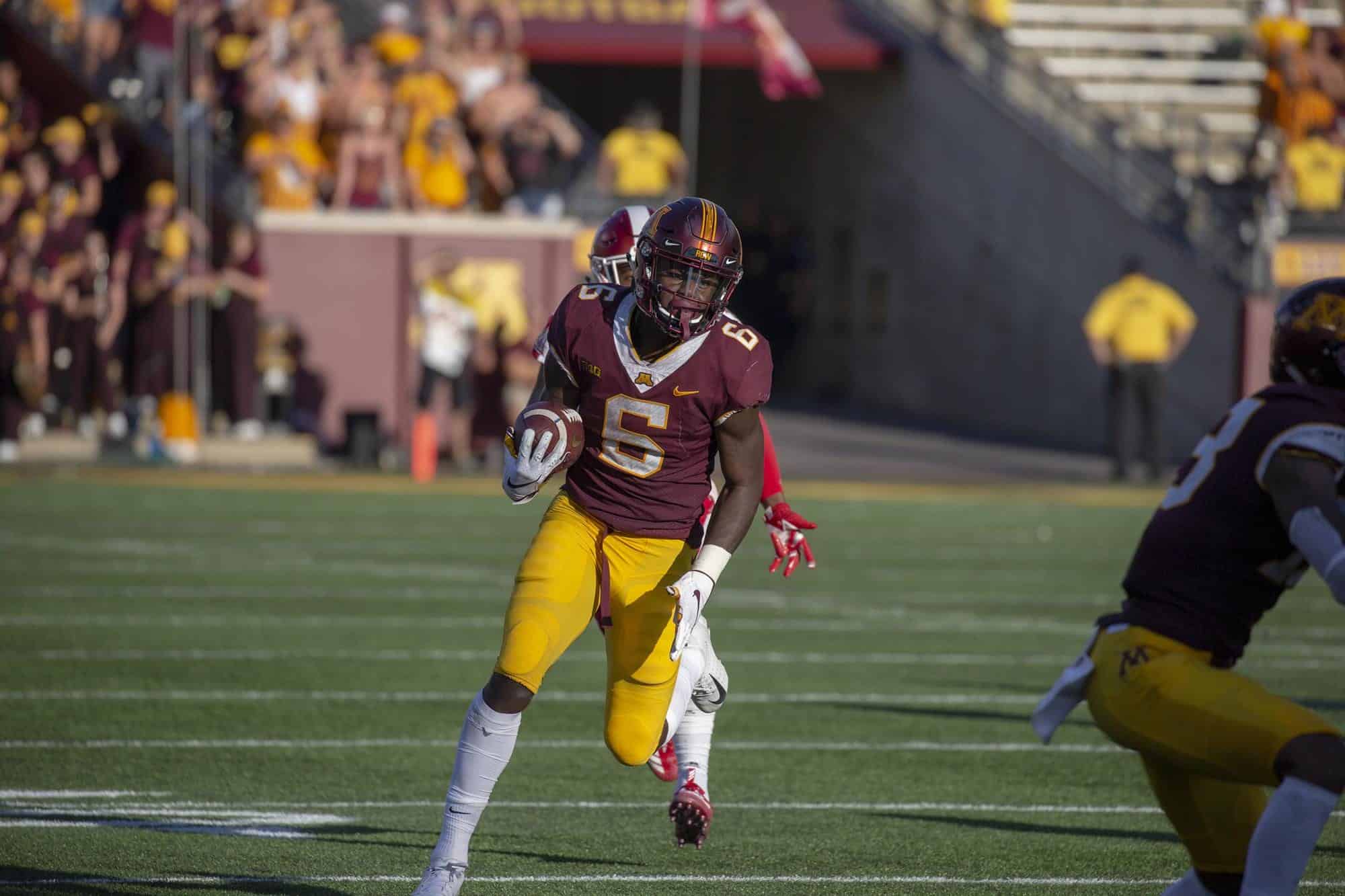 The Minnesota Golden Gophers haven’t had a dominant receiving threat since Eric Decker finished his career as Minnesota’s all-time leading receiver and top-10 in Big-10 history. If Tyler Johnson can find a way to improve this season statistically, he has a solid chance of surpassing Decker’s career production.

Johnson was raised in Minnesota and played quarterback and defensive back in high school. He was a consensus three-star prospect who chose to stay close to home when he selected Minnesota. Over his first two seasons at Minnesota, Johnson had compiled a respectable 818 yards and 8 touchdowns. However, it wasn’t until his junior season that he truly broke out.

I watched a few games of Johnson’s 2017 and was left relatively unimpressed. He showed a fair bit of growth in 2018 though, as he finished the season second in the Big-10 in receiving yards behind only Purdue standout Rondale Moore. Johnson returned to school for his senior season, which I believe was an excellent choice. Moore has tools that can translate to the NFL but is lackluster in several areas in his game.

Johnson shows an excellent ability to read the field and get extra yards once the ball is in his hands. He has a strong lower body with legs that continuously churn. He also has adequate size, making him challenging to tackle, and possesses above average foot speed making him shifty. He’s not overly athletic, so he’ll never outrace everyone. But he can make a big play.

Johnson does a good job gaining separation at the line of scrimmage. He uses his quick feet and lateral agility in cohesion with good hand fighting to keep receivers off him. Johnson has an unfortunate tendency to round out the top of his routes instead of making sharper cuts. These are things he must work on if he wants to succeed in the NFL.

Johnson played from the inside a fair bit this past season, giving him a lot of clean releases which led to bloated production. However, I think the slot is what he’s best suited for in the NFL.

Johnson has an elite ability to find the soft spot in zone coverage. He finds a pocket and sits in it. This skill is imperative for someone who lacks elite athletic ability because he must find ways to succeed other than just being a better athlete than the guy in front of him.

Johnson got away with bullying defensive backs at schools like NMSU and Miami(OH). It’s easy to look good against those teams. Johnson showed his actual merits in games against Ohio St. and Nebraska because he was able to get open against zone concepts.

Johnson is a weird evaluation because he struggles with concentration drops, yet he’s excellent in contested catch situations. He has above average body control and elite concentration at the catch point. These are skills that immediately translates to the NFL. However, the corners will also be bigger, stronger, and can jump higher.

Probably the most underrated top WR prospect in the 2020 #NFLDraft heading into the year. Freaky ball skills.pic.twitter.com/kwYzD4OXzT

Johnson isn’t a burner. He lacks a true second gear. While I don’t value speed the way the NFL does when it comes to receivers, I do have the same concerns with players who lack it. It will be interesting to see how Johnson tests at the Combine. But from what I’ve seen, I think a 4.5 is probably a best-case scenario.

Concentration drops are a huge red flag for me. Most people tend to overlook them because they can be “corrected.” But every reception starts with one thing – actually receiving the ball. Johnson hasn’t played receiver for very long, which could explain some of it. Still, he needs to clean up his hands before I crown him for his incredible contested catch ability.

Johnson has tools that will translate to the NFL game. However, there’s a lot of sloppiness in his game whether it’s at the top of his routes or in his concerning drops. If he can learn to put it all together and stay consistent, there’s no reason he can’t put together a strong season and leave Minnesota as the school’s all-time leading receiver.

Johnson has received praise that includes first-round hype, and it’s not from me. I don’t view Johnson as an elite receiving prospect, and I don’t think the NFL will, either. Johnson will probably end up a top ten receiver in this class for me, but it’s highly unlikely he finished in my top five and anything higher than a late second round grade.

Matt Valdovinos is a writer for PFN covering the Washington Redskins and Big-10. You can follow him @MVScouting on Twitter.

In this article:Featured, featured, Tyler Johnson