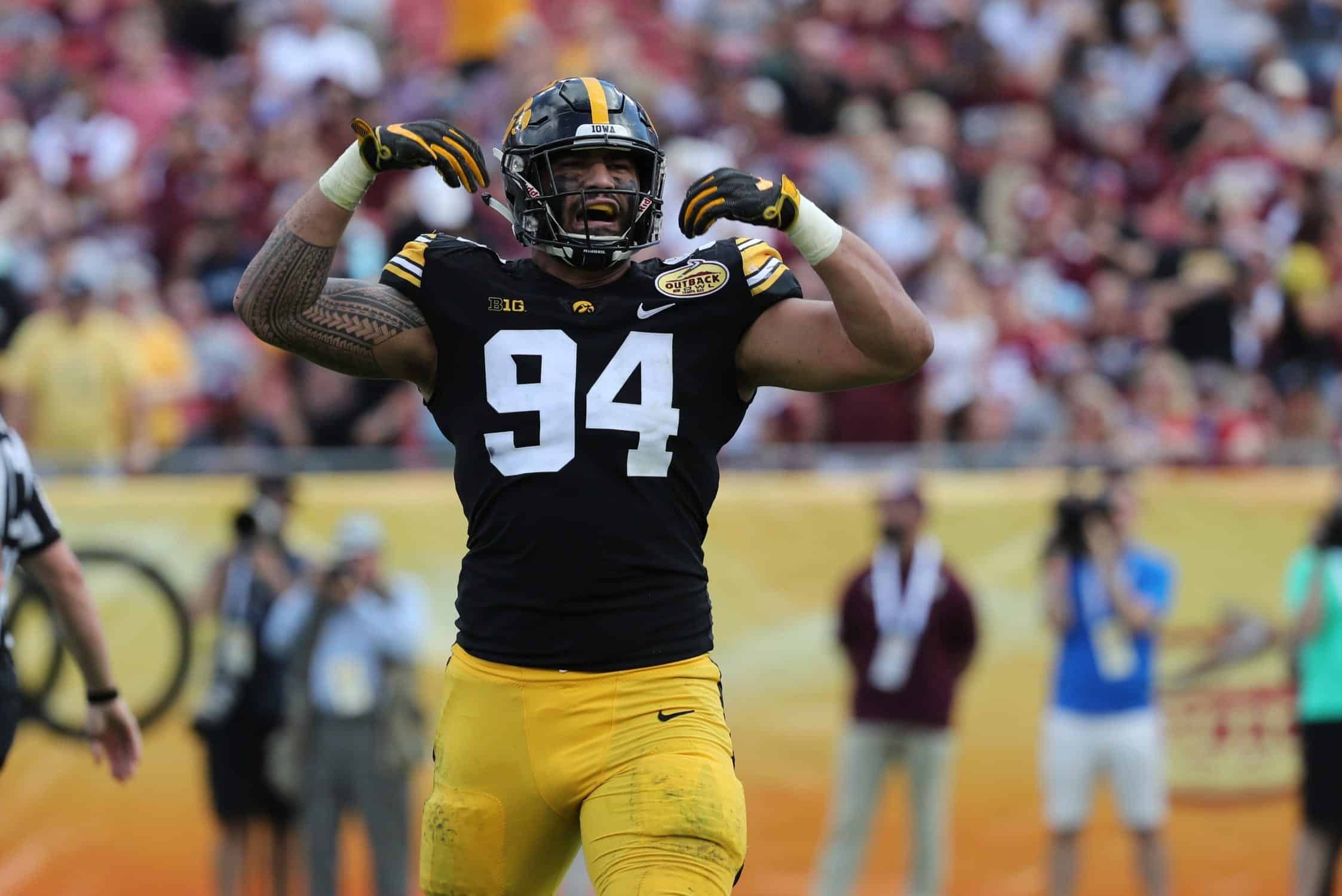 The biggest recruit the Iowa Hawkeyes have had since head coach Kirk Ferentz started his tenure in 1999, A.J. Epenesa looks like a lock to be a top 10 pick in the 2020 NFL Draft. A former 5-star recruit, Epenesa chose to attend Iowa where his father played – a school that rarely finds itself with blue-chip prospects.

Since playing in 11 games as a true freshman, it has become very obvious that Epenesa is the best player on the Hawkeyes. However, that doesn’t mean he got the playing time he earned. Iowa is a bit old fashioned, and Epenesa didn’t start last season due to the presence of senior captain Parker Hesse. Despite Epenesa being the more talented, and more productive player.

Draft prospects commonly have a ton of potential but no real production to back it up, or vice versa. Epenesa is a great blend of both. Even though this will be his first year starting, he’s been the most productive pass rusher on the Hawkeyes since joining the team. Epenesa has already accumulated 15 sacks, 22 tackles for loss, 5 forced fumbles, 1 recovery for a touchdown, and a punt block. This season, look for him to rack up double-digit sacks, which would put him in Iowa’s top 5 all time.

So what separates Epenesa from other edge rushers? While he may not have the athletic ability of a guy like Chase Young, Epenesa wins in his own way. Epenesa uses a blend of length and strength to dominate the trenches. He has some improvement in run defense that he needs to work on. However, that can be easily corrected with more playing time and practice with the first team.

The first thing I noticed when I turned on Epenesa’s tape was his arm length. Standing at 6’6, tackles find it difficult getting their hands on his pads. Both his pass rush and run defense benefit by his ability to keep opposing linemen off of him. When speaking about “elite” pass rush traits, the first one that comes to mind is the ability to “bend.” However, there is an argument to make that a long reach is an even greater weapon for an edge rusher.

Here Epenesa shows how his length allows him to get the offensive tackle off his base. He does a good job by continuing his assault, as he knows the tackle can’t compete with him at full extension.

Iowa leads Northwestern 3-0 at the half. Lots of punting, not a lot of offense. Here's a highlight of how to bull rush if you're a D-end, courtesy of AJ Epenesa. pic.twitter.com/3IecLUDpmE

As shown in the above clip, Epenesa has the ability to drive blockers into the backfield. His bull rush is the best I’ve seen from an edge rusher since I started scouting. Offensive tackles aren’t prepared to deal with someone as strong as Epenesa because they spend so much time training to counter speed rushers.

Epenesa is the prototypical strongside defensive end.  He has the lower body strength to plat his feet and set a dominant edge. Teams struggled to run the ball at him and found minimal success when trying to double him. I’m excited to see how he performs now that he’ll be an every-down player.

Epenesa lacks “bend” – a heralded skill that some people view as the difference between a good pass rusher and a great one. This is a misconception by every sense of the word. The argument makes sense, especially when a guy like Von Miller has dominated the league since being drafted. Don’t be mistaken, elite pass rushers can get it done in other ways. We spoke about his length. But Epenesa also possesses one other elite pass rusher trait – fluid hips.

Go to any defensive line practice on any football team ever, and every time you’ll see one drill in common, the “hip-flip” drill. Whether the coach uses bags or trash cans, it’s always the same idea. Hip flexibility is a vital part of pass rushing because it allows you to remove as much of your body from their reach as possible. Epenesa does an excellent job showing this on nearly every pass rush rep.

Chase Young is the EDGE that people are talking about in the 2020 class, but for my money, AJ Epenesa (Iowa) is the guy to watch. Already has a more developed arsenal of pass rush moves on a bigger, stronger frame. pic.twitter.com/dGyK8Cplk0

One thing I always look for in pass rushers is the ability to hand fight. Winning a pass rush rep usually boils down to who gets their hands inside. Epenesa has shown that he rushes with a plan of attack. His go-to move is a simple hand swipe. While it may seem like a simple move, when combined with his hip flexibility, it becomes lethal. The video above shows both his mobility and his active hands.

Epenesa has some room to grow. He could stand to add some more moves; he’s shown an inside swim on occasion that has worked to perfection. He could also clean up his counters a bit, but he’s shown a natural ability to do it instinctually. Here he uses his inside swim to beat 2019 draft pick Derwin Gray:

Epenesa is a dominating run defender…when the ball is being run towards him. However, he has a bad tendency to be over aggressive when the play is away from him. He runs down the line and sets up an easy cutback lane. Instead of chasing the ball, he needs to “stay home” and be ready for any cutback attempts.

As he becomes an every-down player, run defense becomes all the more important. Shoring up his backside responsibilities could push Epenesa into not just an elite pass rusher, but also an elite run defender as his strong side edge is already dominating.

I combined these things because I don’t believe they’re major concerns. Pass rushers can win without bend. I explained how Epenesa does it. It would be nice to see him get a little low when turning the corner, but it won’t drop his stock for me if he doesn’t.

I see a lot of praise that Epenesa has a hot motor. When he’s getting after the passer, I agree he’s relentless and he never takes a play off. However, to me, a hot motor is someone who sprints to the ball every rep. On occasion, you’ll see Epenesa jog it out after the ball carrier gets a certain distance away – even if he has a chance to make the play. Like I said, not the end of the world, but it is something he can stand to work on.

Epenesa is an elite prospect and arguably the best player in the Big-10 going into the season. I have no doubt that if he puts together a strong season as a full-time starter, he will be my highest graded edge rusher ever. He’s an elite pass rusher and has the potential to be a plus run defender. Epenesa could be the highest drafted Hawkeye since Robert Gallery was selected 2nd overall in 2004 by the Oakland Raiders.