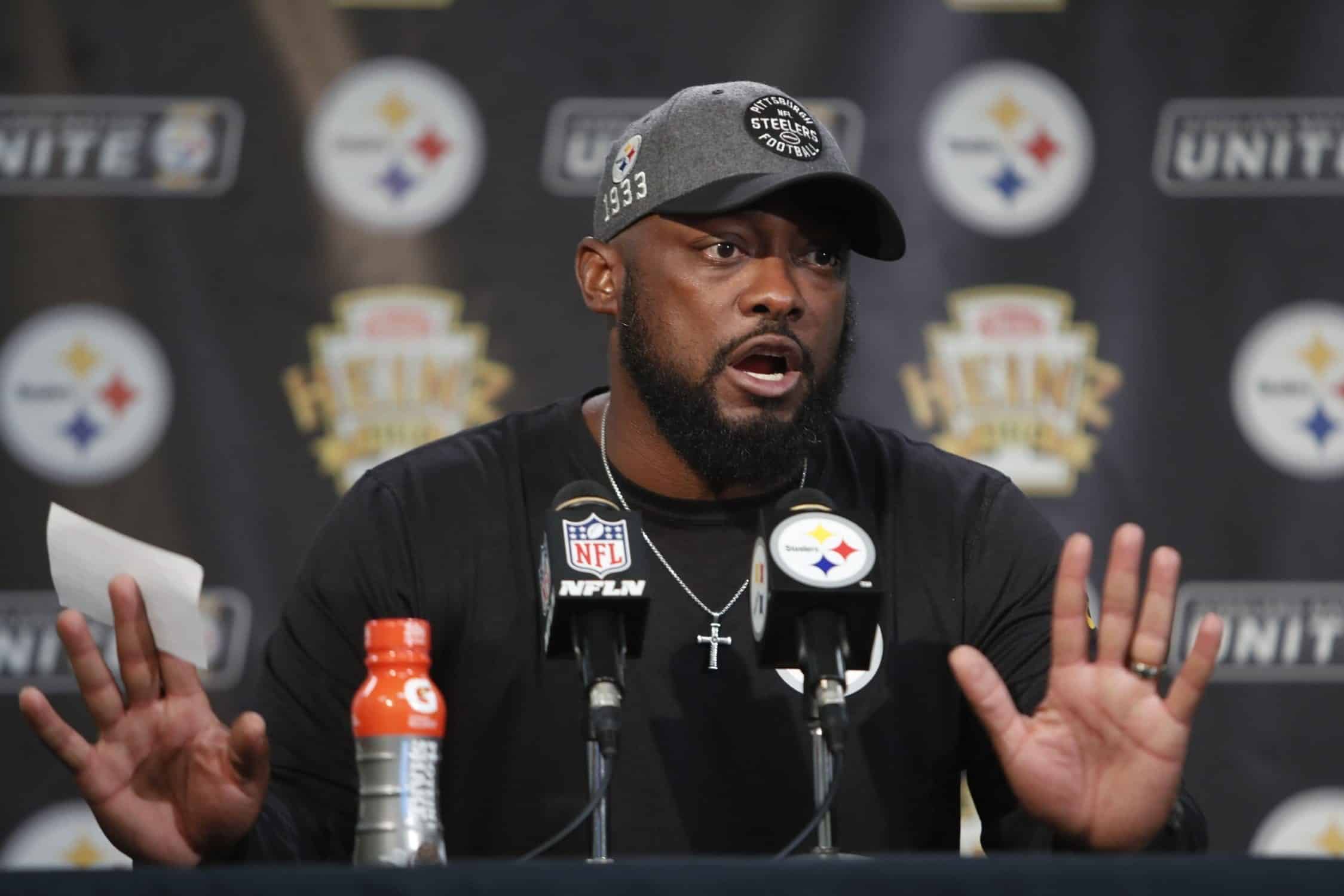 The Pittsburgh Steelers have been getting a bevy of good news this offseason. Ben Roethlisberger’s elbow is progressing nicely, General Manager Kevin Colbert signed an extension to remain with the team, and they made some nice free-agent additions. Eric Ebron, Chris Wormley, Stefen Wisniewski, and Derek Watt all make the Steelers a very capable team.

Even with the losses of Javon Hargrave, Sean Davis, Tyler Matakevich, B.J. Finney, and Ramon Foster, the Steelers have a good roster that does not have a ton of holes on it. That gives them flexibility in the draft. This updated Pittsburgh Steelers 7-round mock draft will help them strengthen the team and make them a deeper, more complete team.

The Steelers have some critical needs they need to fill right away. Safety depth is the biggest eyesore on the entire roster. Behind Terrell Edmunds and Minkah Fitzpatrick, there is a severe lack of competent depth. They also have no single-high safety depth, so that is something that needs to be addressed. Sticking with the defensive side of the football, nose tackle is another need that this team needs. Wormley will not be a nose tackle, and instead, the Steelers should not shy away from that. Outside Linebacker and Inside Linebacker both could use depth upgrades and could be in play early if a best player available scenario arises.

On offense, offensive line depth still needs to be shored out. The team lacks enough interior offensive line options and has a concerning situation at tackle past this year with Matt Feiler, Alejandro Villanueva, and Zach Banner all coming up on contract years. As for the skill positions, this team could use more speed at both running back and wide receiver. The running back room is only decent at best, and the health of James Conner looms large. The receiver room could use more quality depth in the form of a vertical threat or big, possession receiver that can make an impact.

The Steelers have a lack of draft capital with only six picks in the entire draft, so trading down seems like an excellent option. Here, I executed a trade with the Broncos for 77, 83, and 181 in this draft, thus acquiring another Top 100 pick and another pick later in the draft to fill out some needs. It seems natural for the Steelers to do this just with some depth issues all over the roster.

With Peart somehow tumbling down the board to this spot, it was a natural pick. This is the best player available at a prominent position of need at tackle as well. Peart has great natural tools with fantastic length and elite mobility for the position. He can reach the second level extremely quickly, and the mobility shows up in his pass sets as well. Peart has smooth feet, and that will allow him to get to his spot and play earlier than he could without that. The big warts on his game are hands that get far too wide and some contact balance issues that he will need to fix. However, Peart has a very high ceiling and has tools to play both tackle spots.

With the uncertainty at both left and right tackle after 2020, Peart would be an ideal pick to step right in at one of the spots in his second-year with high upside to make a big difference on the offensive line. As a rookie, he offers considerable depth as he learns to fix some issues with his game.

This is a pick of another best player available scenario. Edwards does not bring the burner to the team as a Jalen Reagor would, but Edwards is plenty fast himself while also bringing some physicality and size to the position. The Steelers would not shy away from getting a guy like Edwards who can rise for a ball and make contested catches with ease as well as fit in perfectly as a big slot in the offense.

Edwards is a Steelers wide receiver in just about every manner of the mold. He loves to block and gets after and can crush the seam in the slot with his size mismatch ability. That dependable, big target over the middle would be a huge welcome for Big Ben. Edwards would step in as the fourth receiver on the depth chart and bring quality special teams reps while not contributing to four-wide receiver sets.

This fit makes so much sense. The Steelers could use a versatile chess piece as the third safety that the Steelers need. They could go the route of drafting a replacement for Edmunds in certain situations and making Edmunds the hybrid box safety and linebacker. Wallace would fit the hybrid role perfectly as that dime backer in this Steelers defense. When he sees the play, the guy flies and plays with a physicality that defines the Steelers’ defense.

Even more so, Wallace can man up guys in the slot and be an effective blitzer, which are two things that the Steelers value in their box safeties. The Clemson connections in Pittsburgh are not stark, but they were at his pro day, and that usually means the Steelers are looking at someone. Wallace makes a lot of sense to be that guy with the roles he can fill.

The Steelers might not have gotten speed with their pick at receiver in this mock draft, but they sure will at running back. The Steelers have Kerrith Whyte, who has the speed element of this thing and down and is an excellent pure runner, but Evans is a far more fleshed out version of White and adds a threat this offense just does not have right now.

Evans would step in day one and be the home run hitter the Steelers need at running back. With great vision and contact balance, especially outside the tackles, the Steelers can run outside zone plays and let Evans eat with the offensive line up front. As a receiver, Evans is pretty developed. He has a good route tree for a running back and was split out wide by Appalachian State with confidence. Evans would be a great complement to guys like Benny Snell and Conner, who are more powerful as well. He could be the returner for the team if needed too. The value for the Steelers with what they would be adding is too much to pass up.

The Steelers need that nose tackle, but they have also valued versatility along their offensive line recently. McTelvin Agim brings to just that to the defensive line for the Steelers. A twitched-up, high motor player, Agim has great pass rushing upside and can be destructive when he puts everything together.

The issue arises when Agim lets his pad level rise and gets locked up with a lack of pass rush counters. He has a good pass rush plan and an array of moves, including a mean bull rush that takes advantage of his explosiveness, but there are places he can grow. Still, that pass-rushing upside along with a big body that can clog the run lanes is what they need at nose tackle. Outside of base, Agim can slide to the 3-technique spot and essentially fill what Hargrave’s role.

The depth behind Bud Dupree and T.J. Watt at outside linebacker is promising and includes Tuzar Skipper and Ola Adeniyi, both of whom had flashes in training camp and the preseason. Still, Gipson adds another element to the depth of this unit and is a great value this late in the draft.

Gipson brings an explosive first step and good bend to win around the arc and get the quarterback with speed and flexibility. That is how he succeeded in college, and it is how he will win at the next level. I want to see him expand his arsenal to include some power, but he has the traits to be very solid in this league. His hands are active, and he has a deadly spin move too. A guy like that at this point is precisely what a team that needs depth like the Steelers should look for.

This one makes a lot of sense for the Steelers. Hawkins gives them a true free safety to backup Minkah Fitzpatrick, and Hawkins brings good range and ball skills together to make the mold of safety that the Steelers have looked for in recent years to increase their turnover production.

Hawkins brings instant special teams value as an athletic player who is a solid tackler in the open field. More importantly, Hawkins is fluid enough to flip his hips and range over, so it does not take away from those pluses that he brings to the table here late in the draft. Hawkins may never be a starter, but he can be a very good depth piece that delivers value.

Mike Tomlin loves him some Michigan players, and it is no shock that they add one here late in the draft to help fill out competition and options along with the interior of the offensive line. Onwenu has excellent mobility and movement skills that the Steelers would like to see in their lineman.

There has to be a certain level of nasty in you to be a Steelers offensive lineman, and Onwenu fits that bill very well. His power at the point of attack is impressive and can move guys out of their gaps with that. The grip strength and hand placement often bite Onwenu, but for a seventh-rounder, he is good value who can provide quality depth.