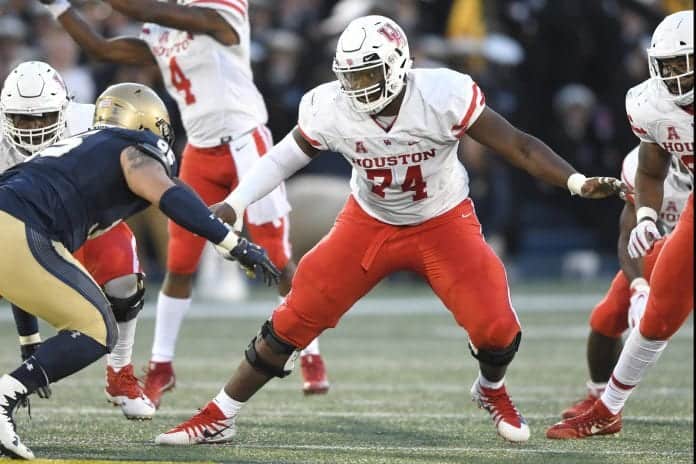 In a deep offensive tackle class for the 2020 NFL Draft, Houston's Josh Jones is making a case to be a top prospect and first-round selection. His stock is soaring.

The 2020 NFL draft is less than 80 days away, and it is typically around this time of year when certain draft prospects find themselves on the hype train. This year is no different. One player who is seeing their stock soar after an impressive week in Mobile, Alabama for the Reese’s Senior Bowl is Houston Cougars’ offensive tackle, Josh Jones.

The offensive tackle group for the 2020 NFL Draft is a deep class, and it is absolutely loaded at the top. Prospects such as Georgia’s Andrew Thomas, Iowa’s Tristan Wirfs, Louisville’s Mekhi Becton, and Alabama’s Jedrick Wills are the top prospects at the position. However, there is plenty of buzz in the scouting community on Jones.

Jones played his high school ball at George Bush High School in Richmond, Texas. He was ranked as a three-star prospect by ESPN, Rivals, and Scout. Rivals ranked him as the 63rd offensive tackle nationally and the 81st player in the state of Texas. His recruiting process ended up with him receiving 13 offers, ultimately choosing the University of Houston.

After redshirting his freshman season in 2015, Jones would go on to have 45 starts at left tackle for the Cougars during his four-year tenure. During this time period, Jones’ durability was on display, as he only missed two games during his four seasons at Houston. Both of the games he missed took place in 2017. Jones’ journey at Houston led him to being named a team captain for a brilliant 2019 season, as he only allowed four pressures during the entire year.

The first thing you notice when looking at Jones is his impressive size. Standing 6’5″ and weighing in at 311 pounds, Jones also possesses impressive arm length of 33 5/8th”, which is a key trait in the draft community. Jones has impressive length and he uses it well, allowing him to anchor the edge effectively.

Jones moves well in space, has impressive athleticism, quick feet, and plays with a nasty demeanor. He has great mobility, allowing him to reach blocks at the second level with ease. His initial punch is something that will catch your attention. However, he needs to improve his hand usage overall.

In the clip below, Jones’ mobility and athleticism are on full display, as he pulls to the right and reaches his block:

Josh Jones (Houston LT 74) pulling to the right and picking up the linebacker. pic.twitter.com/RPoIXs5h4n

The clip below will highlight Jones’ quick feet and ability to use his length to set the edge:

Really love his combo of quick feet and length that allow him to really control the edge. Very good mover in space. Took a step up this year with his hands too.

As mentioned above, while Jones possesses an impressive initial punch, his hand usage needs some refinement. Too often, he allows defenders to get into his body by chopping his hands away. Coaching will be crucial for his development, as his technique could use a great deal of improvement.

There are times where Jones tends to get lazy with his mechanics, so finding consistency in his game will be paramount. From a football IQ standpoint, Jones could benefit from watching more tape, as he seems to have some trouble identifying blitzes.

The video below will show a rep where Jones’ hand usage is poor, allowing Utah’s Bradlee Anae to beat him:

Prior to Senior Bowl week, Jones was considered a second-round prospect for the 2020 NFL Draft, but a strong performance in Mobile may have catapulted him into the first round. Jones was the best offensive lineman at the Senior Bowl, and joins a group consisting of Oregon quarterback Justin Herbert, Dayton tight end Adam Trautman, Utah pass-rusher Bradlee Anae, and St. John’s offensive tackle Ben Bartch as the top performers in Mobile. Jones wasn’t spectacular on the first day of Senior Bowl practices, but from day two forward, he was dominant.

Last week in my article, I named North Carolina Tar Heel defensive lineman Jason Strowbridge as one of the biggest risers for the 2020 NFL Draft. In the clip below, he is pancaked by Jones during a one-on-one rep:

josh jones is on another level

Here is a rep where Jones uses his feet, athleticism, and length to stonewall Syracuse pass-rusher Alton Robinson:

There is no doubt that the Houston prospect needs some work, but he is an ascending draft prospect with a high ceiling. His performance in 2019, paired with a strong showing at the Senior Bowl, may have cemented Jones as a first-round selection in the 2020 NFL Draft. His stock could potentially soar even more, as the NFL Scouting Combine is an event where Jones’ outstanding athleticism could generate even more buzz.

There are many teams in the league who are looking for help on the offensive line and should hold Jones in high regard, such as the Miami Dolphins, Minnesota Vikings, Denver Broncos, and Cleveland Browns. As it stands today, Jones is my fifth-ranked offensive tackle. He is a player that should hear his name called as a top-25 selection in the 2020 NFL Draft.