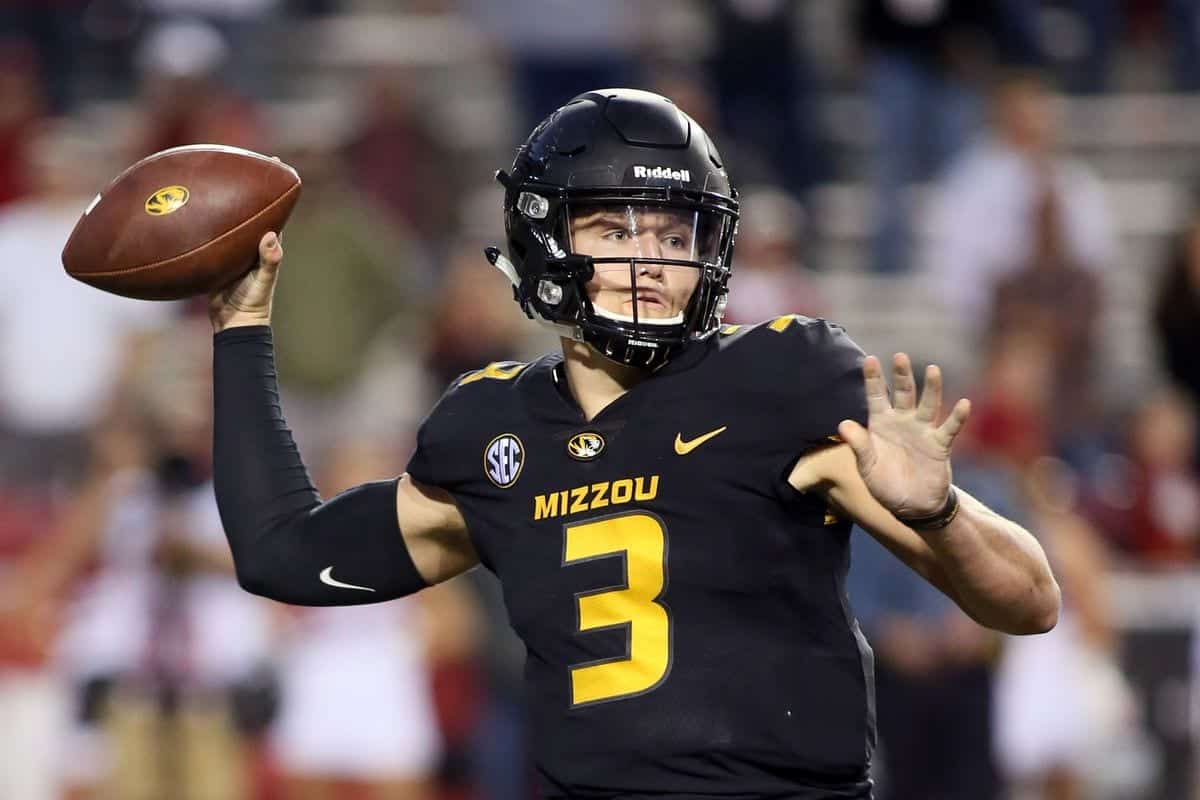 Photo Credit: USA Today
What's in this article? Click to show
The 2019 NFL Draft will be here soon and with that comes the popular mock draft season. With that in mind, knowing that the 2019 NFL Combine has passed and the free agency period is underway, it is time to focus more on mocks.
1. Arizona Cardinals
2. San Francisco 49ers
3. New York Jets
4. Oakland Raiders
5. Tampa Bay Buccaneers trade with the Denver Broncos
6. New York Giants
7. Jacksonville Jaguars trade with the Buffalo Bills
8. Detroit Lions
9. Jacksonville Jaguars via Buffalo Bills
10. Tampa Bay Buccaneers via Denver Broncos

The 2019 NFL Draft will be here soon and with that comes the popular mock draft season. With that in mind, knowing that the 2019 NFL Combine has passed and the free agency period is underway, it is time to focus more on mocks.

There are many ways a draft, and in particular, a specific round has the potential of playing out. Given the numerous moves still being made and the opportunities for trades to still occur, nothing is truly set in stone. Looking ahead to late April, the following mock is how the first round of the 2019 NFL Draft could play out.

No, I am not buying into the likelihood of Arizona selecting Oklahoma quarterback Kyler Murray at this time. By doing so, they keep second-year quarterback Josh Rosen and add the top EDGE and my top prospect in the draft.

There should only be two options with Bosa off the board: Allen and Quinnen Williams. The 49ers have added along the defensive line in recent years. However, they still need help from those who are an EDGE. With Bosa off the board, arguably the most athletic defensive player is selected as Allen, who has better pass rushing skills than those currently on the roster, is added to their front seven.

New York lost out on Anthony Barr, who returned to the Minnesota Vikings in free agency. Also, the top two EDGE prospects are gone, so they have to go a different route. There is not an offensive lineman here worth selecting. However, Williams is a great option, obviously, who the Jets would be glad to see fall to them, to say the least. He will bolster the defensive line immediately. Williams’ presence will command double teams regularly, leading to C.J. Mosley and company making plays in the front seven.

Jon Gruden and Mike Mayock are adding talented players to help Derek Carr. While the possibility of selecting D.K. Metcalf is intriguing, Oakland gets their long-term quarterback who happens to be the most polarizing player for many in this year’s draft. In addition, having three first rounders helps in determining how the other picks should be made. Upon selecting Murray, in time Oakland will figure out how and when it will be best to move on from Carr.

The first trade of the draft sees Denver trading to five as John Elway decides not to wait to get their franchise quarterback in Lock. The former Mizzou signal-caller’s arm strength is not questioned. However, he is far from a complete prospect. Luckily, he gets the chance to sit and learn from recently acquired Joe Flacco.

The run on quarterbacks continues with my top quarterback prospect going to the Big Apple. Although New York is apparently not scouting Haskins, I do not buy it. All teams must do their due diligence to some degree. Haskins threw for 50 touchdowns last season for Ohio State and will get to be the full-time starter in 2020. After last season bypassing all of the top quarterbacks outside of Baker Mayfield, New York does right and gets the best quarterback on the board.

Buffalo passes the Detroit Lions, who has multiple similar needs. The Bills have been busy adding pieces to their offense, and that does not change here. In addition to what they have done, Buffalo keeps adding weapons with Metcalf being their latest go-to option. Metcalf put on a strong showing at the combine which helps given that his tape was not always consistent with that of a top-10 pick.

Additional pieces need to be added to help right the ship in Detroit. On offense, the need for players to do more than one thing well cannot be overlooked. By adding Hockenson, the Lions have upgraded offensively, both from a blocking and receiving standpoints.

Jacksonville has been busy upgrading their offense this offseason. While doing so, they needed to cut some players, including defensive tackle Malik Jackson. Now, that hole on defense is filled with Oliver, who was viewed as a likely first overall pick at times in college.

Facing Drew Brees, Cam Newton, and Matt Ryan twice per season, Tampa Bay cannot have enough pass rushers. Although Sweat occasionally has trouble going forward on the point of attack, his pass rushing abilities are what any team would want.

Moving along in this mock draft, Cincinnati gets the top defensive player left available to both pair him next to Geno Atkins as well as moving him around when needed. Green Bay needs a long-term answer at tight end, and they find their answer in Fant. Miami could have gone with a defensive lineman in this draft. But given their offensive tackle need, selecting Taylor was a must after all. Atlanta’s Dan Quinn and company are working to get their defense back to how he had them in Seattle and White is an important piece to accomplishing that.

Washington missed out on all of the top quarterbacks in this mock draft. As a result, they instead bolster their defense. Burns has not received as much hype surrounding his game compared to others. But that should change in the preseason and beyond. Carolina has focused on the offensive line in free agency, most notably center Matt Paradis, which allowed them to upgrade their cornerback position in this mock draft via Williams and his all-around game.

Houston needed that upgrade at running back, which they accomplished in this draft by trading up. Now, Deshaun Watson has a reliable running back to go along with most notably Will Fuller and DeAndre Hopkins. In any case, by adding Jacobs, Houston no longer has to go with the running back by committee approach. Baltimore has not had that true number one wide receiver in some time. That said, Harry will be a critical piece in Lamar Jackson’s development. Minnesota’s and Pittsburgh’s offensive line and secondary positions respectively are a mess, and their respective selections will go a long way into correcting their problems.

Seattle, Tennessee, and New York are all in different situations regarding their respective offensive and defensive lines. For Seattle, Wilkins can come in and clog up double teams, helping his fellow front seven teammates as they look to get to the playoffs again. Tennessee needs both depth and possible replacements. Tillery’s skill set should provide more options for Mike Vrabel in terms of both how he’d use Tillery as well as moving more players around in different looks. New York has been criticized this offseason. However, adding Risner in the draft to an offensive line with Kevin Zeitler and Will Hernandez improves that unit now and for the future.

Philadelphia is in a position where value at running back is not available, but they do upgrade corner. Philly may start Ronald Darby over Ya-Sin. But being that he is older and is on a one-year deal, it won’t be long before Ya-Sin replaces Darby and eventually becomes CB1.

Although Indianapolis signed Devin Funchess, adding more help on offense is needed. As a result, by drafting Harmon, he can come immediately and play opposite T.Y. Hilton. Not everything Oakland does from a draft point of view can be on offense. Therefore by adding both Bush and Baker, they get two very talented starting players on defense. In short, this is the kind of haul people should be expecting Oakland to bring in given their draft capital.

Abram is the hardest hittest safety in the draft. Combining his skill set to that of Derwin James, the Chargers have their safeties set for the long run. On the contrary, the Chiefs need their new long-term option replacing Eric Berry. Therefore, it makes too much sense to select Rapp, who can be moved around accordingly similar to how Berry played.

Green Bay could have added to what they already have on offense. However, the value Simmons provides and knowing what he can do when healthy is too much to pass up. At one time, Ferrell was seen as a top-15 pick. Given his toe injury and inability to participate at the combine and pro day, it’s understandable why his draft stock has dropped. The same goes with New England, who is known as a team willing to take chances on prospects with an injury history. Once Brown is good to go, he will fit in nicely replacing Chris Hogan next season should he sign elsewhere in free agency.