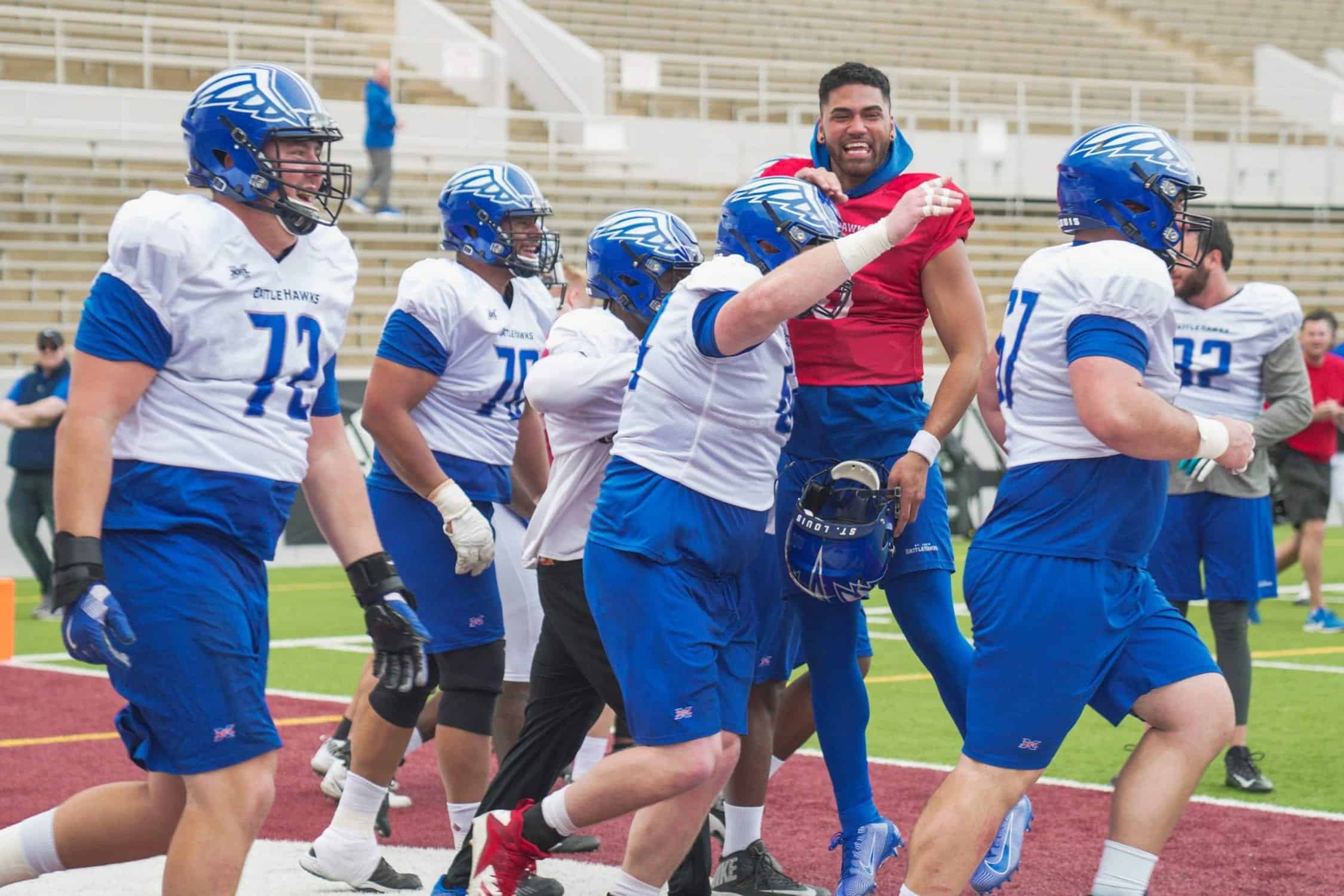 Photo credit: USA Today
What's in this article? Click to show
An inexperienced leader
A fascinating roster that has the chance to surprise
Betting Profile

The first stop on our magical 2020 XFL betting preview tour takes us to the St. Louis BattleHawks, where the team hopes to fill the void left by the Rams departure after the 2015 NFL season. It’s probably asking a lot to expect the BattleHawks to fill the void of the “Greatest Show on Turf” Rams teams that appeared in multiple Super Bowls in the early part of the century. However, St. Louis can at least be proud of some of the sharper XFL uniforms on display, including an oversized winged helmet logo and a metallic blue and grey color scheme. Not much is expected of the St. Louis BattleHawks this season in the XFL, as evidenced by a 3.5 projected win total, which is tied with Seattle for worst in the league. The BattleHawks’ championship odds can be found as high as +1000 on Bet365, further evidence that Las Vegas expects this team to finish at the bottom of the Eastern Division.

Jonathan Hayes is a former 11-year NFL veteran tight end who might best be remembered as an assistant coach under Marvin Lewis with the Cincinnati Bengals. Hayes is the least seasoned of all the XFL coaches, having never served as an offensive coordinator at any level.

A fascinating roster that has the chance to surprise

If Hayes is hoping for an aerial offensive assault to match the aviation theme of the BattleHawks team name and uniforms, he might be in for a rude awakening. St. Louis has a crowded quarterback room with no clear-cut choice as the long-term starter. Jordan Ta’amu was a lightly recruited prospect out of Hawaii who went to The University of Mississippi to back up Shea Patterson. When Patterson transferred to Michigan, the “Throwin’ Samoan” made the most of his opportunity, piling up over 5,000 yards and 30 touchdowns in his two-year stint at Ole Miss. He was officially named the starter last Wednesday, although if the preseason scrimmages are any indication, Ta’amu will have former Carolina Panthers backup Taylor Heinicke breathing down his neck. Also, the BattleHawks brought in former Mississippi State Bulldog Nick Fitzgerald last weekend, which could throw a monkey wrench into things if Ta’amu struggles early on. Hard to think that any of the St. Louis quarterbacks will strike genuine fear in the hearts of opposing defenses.

Whoever emerges as the BattleHawks signal-caller will have an experienced backfield to lean on. St. Louis has two accomplished ex-NFL players to carry the football in crunch time. Christine Michael is a former second-round NFL Draft pick of the Seattle Seahawks who showed flashes back in 2016 when he started seven games for Seattle, amassing nearly 600 yards rushing and scoring eight touchdowns. Michael will split carries with former Florida Gators running back Matt Jones. Jones had a solid rookie campaign for the Washington Redskins and entered 2016 as the starter before suffering a knee injury in October of that year that left him limited and eventually replaced. The BattleHawks will hope Jones can get back to the potential he showed in racking up 123 rushing yards against the St. Louis Rams in September of 2015.

In terms of pass catchers, the BattleHawks do not boast a ton of familiar names for the casual NFL fan. Former Michigan State star Keith Mumphrey was a 5th round pick of the Houston Texans who was eventually cut due to allegations of sexual misconduct while still enrolled at MSU. He was later cleared of all wrongdoing by the University, but by then the damage was done professionally. He is a dangerous kick returner who will be looking to use this opportunity as a potential springboard back into the NFL. Mumphrey will be joined at wide receiver by two players who most recently made some noise in the AAF in L’Damian Washington and De’Mornay Pierson-El. It will be up to offensive coordinator Chuck Long to find creative ways to get these guys the ball considering the question marks at the quarterback position.

On the defensive side, the BattleHawks have some solid pieces, particularly in the secondary. Last summer, talented West Virginia safety Kenny Robinson opted to play in the XFL this season instead of entering the NCAA transfer portal. It was announced last week that he will be eligible for the 2020 NFL Draft, meaning Robinson will be using this year to boost his draft stock. He’ll be joined in the secondary by cornerback Robert Nelson who was acquired via trade from Houston. Nelson played in over 20 NFL games and was a starter for the Arizona Hotshots of the defunct AAF last spring. At the linebacker position, Terence Garvin is a guy with NFL experience who was dominant at times for Steve Spurrier’s Orlando Apollos franchise.

The St. Louis BattleHawks will open the season on the road for their first two regular-season games before finally hosting the New York Guardians in the Dome at America’s Center. We mentioned earlier that St. Louis isn’t expected to challenge for a championship, at least according to Vegas odds. And while I’d love to recommend taking the over on 3.5 wins, I just don’t have any confidence in this team’s quarterback room. Four wins are definitely within reason, especially if the defense is as good as advertised in the secondary. This will be a team I closely monitor weekly game totals for, as I suspect they could be involved in several rock fights where the offense counts on their dynamic RB duo to melt some clock. Pending how the XFL scoring system plays out, I might look to grab the under in early St. Louis games, but I’ll stay away from the BattleHawks with regards to preseason win totals.

Running List of PFN Bets
Click to view the running list of our bets for this week and the 2019 NFL regular season. Be sure to bookmark that page and visit it often throughout the week to stay updated on our latest moves.