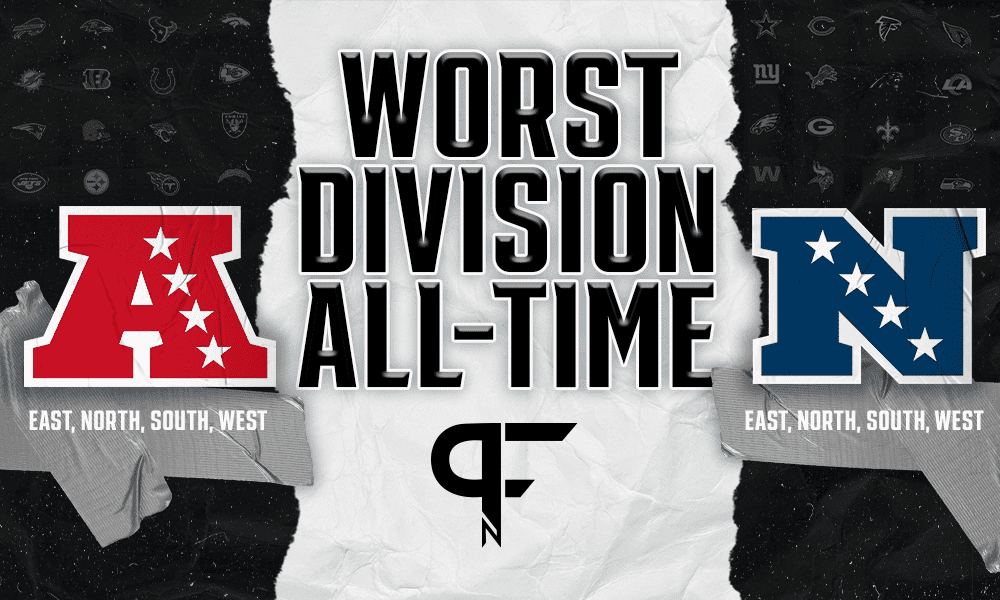 What is the worst division in NFL history?

Throughout NFL history, we have seen several divisions labeled the worst at any given time. Looking back across the league’s history to the NFL-AFL merger, which division takes the crown as the worst of the bunch? Divisions are judged on overall record in terms of winning percentage.

Which divisions land in the bottom nine in NFL history?

Surprisingly, this is the only division pre-2000 to land on our list of the worst divisions in NFL history. Two divisions from that time fall just outside the list — the 1979 NFC West and the 1984 AFC Central. However, the 1982 NFC West takes the dubious honor as the last team on the list.

The 1982 season is remembered for being shortened to a nine-game schedule due to a 57-day player strike. Therefore, the league adjusted the playoff settings to allow the best eight teams in each conference to qualify.

Despite over half of the teams in the NFC making the playoffs in 1982, the NFC West managed to have just one team qualify (Atlanta Falcons). The other three teams made up half of the NFC teams to not make the playoffs.

In its 19-year history, the AFC South has seen a wild swing in outcomes for the division. It was among the best divisions in NFL history at the peak of its powers, but it had a shocking period between 2013-2015. In each of those three seasons, the division registered a collective win percentage below .400.

The worst season came in 2013 when two teams won fewer than five games — Houston Texans (2-14) and Jacksonville Jaguars (4-12). The Indianapolis Colts saved the blushes a little at 11-5, but the Tennessee Titans 7-9 finish doomed the division to be among the worst of all time.

The NFC East has struggled in the last decade. Four times they have finished with a winning percentage below .440.

The 2019 season saw the division win a combined 24 games, with only the Philadelphia Eagles finishing above .500. The Dallas Cowboys were close at 8-8, but the disastrous campaigns for the New York Giants (4-12) and Washington (3-13) resulted in an outcome that saw the division rank among the worst in NFL history.

In 2009, only one team finished above .500 (Arizona Cardinals at 10-6). Yet, they finished with the lowest point differential (+50) of any NFC division winner. The Cardinals would defeat the Green Bay Packers 51-45 in the playoffs before falling 45-14 to the New Orleans Saints in the Divisional Round.

We go straight back to the NFC West, but this time in 2016. Of the four teams in the division, three finished with a record below .500. The Rams and 49ers won a combined six games. The Cardinals, meanwhile, could be considered somewhat unlucky, finishing 7-8-1 despite having a +56 point differential. The Seahawks led the division at 10-5-1 before being eliminated by the Falcons in the Divisional Round.

Widely treated as one of the worst divisions in NFL history, the 2020 NFC East actually ranks fourth based on win percentage. While the division-winning Washington Football Team finished 7-9, no team was a complete disaster, with the Eagles finishing last at 4-11-1.

The Giants and Cowboys both won six games, ensuring that the division would not finish atop the list of worst divisions of all time. Nevertheless, with the NFC East featured on this list from both 2019 and 2020, it’s no surprise this division has been highly criticized.

The 2008 AFC West was marginally worse than the 2020 NFC East simply because of the Eagles’ tie with the Bengals. Still, given that two teams finished 8-8, it could be argued that the NFC East in 2020 was worse.

This division was intriguing because the Denver Broncos lost the division (and their playoff spot) after failing to win any of their last three games following an 8-5 start. In contrast, the San Diego Chargers won their final four games to clinch the playoff spot thanks to a 5-1 record within the division. The Chargers finished the year as the highest-scoring team in the 2008 regular season.

The records of the Oakland Raiders (5-11) and Kansas City Chiefs (2-14) lead this division to be remembered as one of the worst divisions in NFL history.

Statistically, the 2014 NFC South is one of the worst divisions of all time. Nonetheless, it went down to the wire. In the end, the Carolina Panthers emerged on top at 7-8-1. Yet, the Panthers had to win their final four games to even get to that point.

When all four teams fail to win eight games, the division will always be a disappointment. The Saints narrowly finished behind the Panthers at 7-9, with the Falcons at 6-10. It was the Tampa Bay Buccaneers (2-14), though, that ensured this division would rank high on this list.

What is the worst division in NFL history?

Which division tops the list as the worst of all time in NFL history?

Even though the NFC West provided the NFC Super Bowl participant in 2008, statistically, it ranked as the worst division in NFL history. The Cardinals won the division at 9-7 with a +1 points differential. They then went on a fairytale playoff run to Super Bowl XLIII, where they lost to the Pittsburgh Steelers.

However, the rest of the division was a disaster, winning just 13 games combined out of a potential 48. The 49ers were second at 7-9, while the Seahawks and Rams finished 4-12 and 2-14.

Keep Reading! What is the best division in NFL history?

Cam Newton Fantasy Analysis: Should you claim him on the waiver wire?