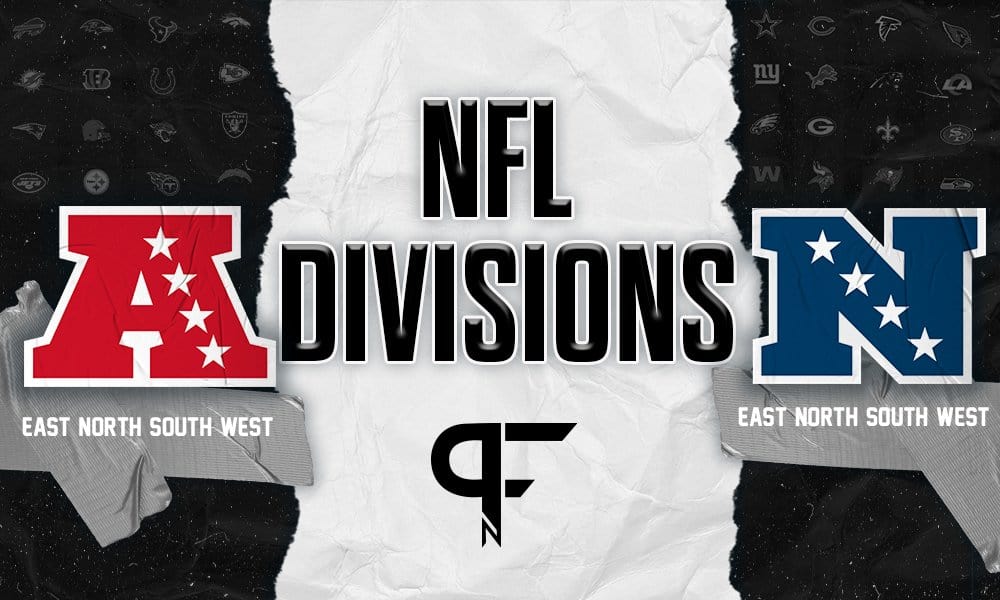 What's in this article? Click to show
How many divisions are in the NFL?
AFC Divisions
NFC Divisions
Which NFL division has the most Super Bowls?
Want more NFL news and analysis?

Most fans of the NFL know the divisions and the teams within them by heart. Recently, the divisions in the NFC have appeared to be more competitive than the AFC. That is, of course, outside of what has been a weak NFC East over the past few seasons. As a result, we’ve seen a lot of parity in the top teams in the NFC.

How many divisions are in the NFL?

The Kansas City Chiefs are currently projected to win the most games in the AFC at 12. That projection is also the highest in the NFL. Moreover, the New York Jets, Cincinnati Bengals, and Jacksonville Jaguars project to win 6.5 games. However, the lowest projection in the AFC belongs to the Houston Texans with just 4.5 projected wins.

The Baltimore Ravens, Cincinnati Bengals, Cleveland Browns, and the Pittsburgh Steelers make up the four teams in the AFC North division.

The Buffalo Bills, Miami Dolphins, New England Patriots, and the New York Jets make up the four teams in the AFC East division. The Patriots and Steelers both have more Super Bowls (6) than three NFL divisions.

The Houston Texans, Indianapolis Colts, Jacksonville Jaguars, and the Tennessee Titans make up the four teams in the AFC South division. Unfortunately, the AFC South possesses the least Super Bowl victories of all NFL divisions with two. The Colts claim both titles, although one win came in 1971 as the Baltimore Colts.

Which teams make up the NFC, and which divisions are they located?

The Chicago Bears, Detroit Lions, Green Bay Packers, and the Minnesota Vikings make up the four teams in the NFC North division.

The Dallas Cowboys, New York Giants, Philadelphia Eagles, and the Washington Football Team make up the four teams in the NFC East division.

The Arizona Cardinals, Los Angeles Rams, San Francisco 49ers, and the Seattle Seahawks make up the four teams in the NFC West division.

The Atlanta Falcons, Carolina Panthers, New Orleans Saints, and the Tampa Bay Buccaneers make up the four teams in the NFC South.

Which NFL division has the most Super Bowls?

The greatest of the NFL divisions is undeniably the NFC East. Yet, it’s been one of the worst divisions in football over the past few seasons outside of the Eagles’ incredible 2017 Super Bowl run. The NFC East reigns superior with 13 Super Bowl championships. The AFC East is the next closest with nine Super Bowl titles, and they also tie the NFC East with 21 Super Bowl appearances.