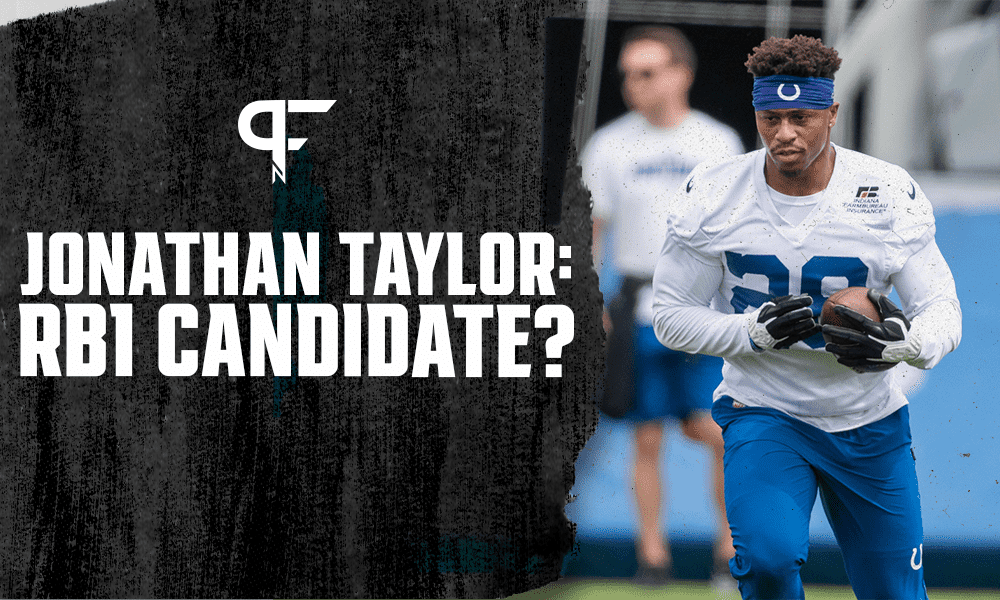 Will Jonathan Taylor be a reliable RB1 for the Colts’ offense in 2021?

By Eric Moody
June 29, 2021
What's in this article? Click to show
Jonathan Taylor’s college statistical body of work
A slow start and climactic finish for Taylor in 2020 shows a glimpse of what 2021 could be
Taylor will have four familiar faces on the Colts’ offensive line
Taylor’s age and player comparisons suggest a future RB1
Bottom line
Want more fantasy football analysis and news?

Jonathan Taylor was another rookie running back, like Clyde Edwards-Helaire, who had a ton of preseason hype. He started the season slowly, but Taylor finished as the RB6 in PPR formats. Is that momentum sustainable? Will Taylor be a reliable fantasy football RB1 for the Colts?

Taylor was dominant at the University of Wisconsin. He generated three consecutive seasons (2017 to 2019) of 2,000 or more total yards for the Badgers. Taylor had 61 rushing attempts of 10 or more yards in each of his three collegiate seasons. He averaged an inconceivable 4.2 yards after contact per attempt during his career at Wisconsin.

Taylor has the traits you want in an NFL running back. He understands what’s going on in front of him and the instincts to know where to go. Taylor also has the burst to get there quickly. Furthermore, his receiving ability at Wisconsin was underrated.

Taylor has the frame and physicality to win individual battles and the ability to be elusive in traffic. He is exceptional at balancing himself through contact to gain additional yardage.

These are some of the traits that had fantasy managers salivating to see what Taylor could accomplish at the next level with a team like the Colts. His season didn’t start as many anticipated, especially with committee mate Marlon Mack being out for the year with a torn Achilles.

Taylor was gradually worked into the Colts’ running back rotation in 2020. From Week 1 to 10, he only played 45% of the team’s offensive snaps. Taylor averaged just 15.2 opportunities, 70.2 total yards, and a dismal 12 PPR fantasy points per game.

Taylor went nuclear from Week 11 to 17 as the Colts allowed him to transition to boss mode form. He played 61% of the team’s offensive snaps during that time frame, averaging 22.7 opportunities, 139.5 total yards, and an impressive 24.3 PPR fantasy points per game. Taylor finished as an RB1 in five out of six games.

Taylor ended the season with four games of 4+ targets and proved to be very capable as a receiver out of the backfield. Moreover, he averaged the ninth-most fantasy points per target (6.17) among running backs, just ahead of Vikings star Dalvin Cook who finished 10th (6.14). Many draft analysts were concerned about his limited reception total and number of drops coming out of Wisconsin.

Taylor has all of the essential tools to be a top-tier three-down NFL running back. Taylor rushed for 1,169 yards and scored 11 touchdowns while averaging 5.0 yards per rushing attempt. The only running back with more rushing attempts of 15 or more yards last season than Taylor (14) was Derrick Henry (21).

The other running backs in the Colts’ backfield

Indianapolis re-signed running back Marlon Mack on a one-year deal. A torn Achilles is a serious injury and challenging to return from for an NFL player. It would be surprising if the Colts provide him a high number of touches in 2021. Still, Mack will have a role given his statistical body of work. He rushed for nearly 2,000 yards and scored 16 touchdowns during the 2018 to 2019 seasons. Mack averaged nearly 19 opportunities per game during that span.

The Colts also have Nyheim Hines on the roster. He’s more lethal as a receiver out of the backfield than as a runner. Hines caught 83% of his 76 targets for 482 receiving yards and 4 touchdowns in 2020.

The Colts are blessed with not just one but three running backs who wreak havoc on opposing defenses in numerous ways. Taylor’s opportunity share (37%) and snap share (62%) over the last five weeks of the 2020 season provide us a glimpse of what to expect in 2021. Taylor is also fortunate enough to run behind one of the NFL’s top offensive lines.

Taylor will have four familiar faces on the Colts’ offensive line

The Colts return four starters from what has been one of the NFL’s top offensive lines over the last few seasons. Indianapolis has adequate depth at the tackle position and also inside at center and guard. Here is what our very own Ben Rolfe had to say about them in our NFL offensive line rankings:

“Losing left tackle Anthony Castonzo is the only thing that stands between the Colts and a top-10 ranking among the best offensive lines heading into 2021. They signed Eric Fisher, who could be an adequate replacement, but he could start the year on the PUP list. That leaves Sam Tevi, Julién Davenport, or Jake Benzinger starting at left tackle to open the season.”

Indianapolis’ offensive line will continue to open running lanes for Taylor. The unit will also be tasked to protect new quarterback Carson Wentz, who was constantly under duress in Philadelphia last season.

The Colts have offensive weapons at multiple positions and one of the best offensive lines in the NFL. Indianapolis is a perfect spot for Wentz to revitalize his career. Taylor and the Colts’ running back committee will be a key part of the team’s offensive identity in 2021.

Taylor has the potential to join the truly elite running backs in 2021. There are pros and cons when examining his rushing yards, receptions, effectiveness, and draft position. Todd Gurley, Leonard Fournette, Nick Chubb, Eddie Lacy, and Jeremy Hill all had similar rookie seasons to Taylor over the last decade.

Taylor was efficient during his rookie season, which bodes well for his future as an RB1. Taylor (0.93) ranked 13th among running backs in fantasy points per opportunity. Additionally, he was much more efficient from Week 11 to 17. It is imperative for Taylor to continue to develop as a receiver out of the backfield in 2021. The lack of targets will lower his fantasy ceiling.

We all remember Gurley’s magical 2018 season. He averaged 27 PPR fantasy points and 6 targets per game. Lacy and Chubb are notable examples of how running backs not excelling or being used as receivers can negatively impact their ceiling.

Taylor is entering his age-22 season. The fact that he finished as the RB6 in PPR as a 21-year-old rookie is an excellent sign of what’s to come. Taylor is more likely to accomplish this feat again.

Taylor is just scratching the surface of what’s he’s capable of. You shouldn’t hesitate to select him at his current ADP.

Taylor could be provided nearly 335 opportunities in 2021. With his effectiveness, he could easily replicate his 2020 success and exceed it.

Fantasy Kicker Rankings Week 3: Who could find themselves in a shootout?