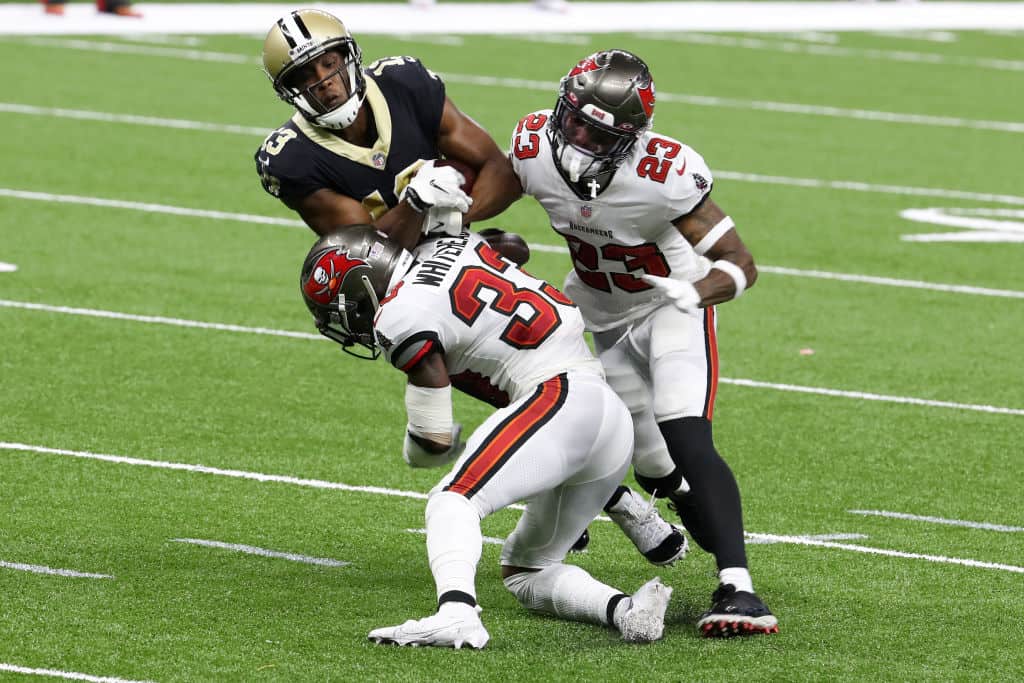 The seemingly complete collapse of the relationship between Michael Thomas and the New Orleans Saints has left fantasy football managers scratching their heads as a potential trade looms. An ankle injury and then a hamstring injury has kept Thomas out since Week 1, with a one-game suspension and a bye week also having been thrown into the mix.

Now, rumors are swirling that Thomas could be on his way out of New Orleans, with the Green Bay Packers and San Francisco 49ers mentioned as potential destinations for the stud wide receiver. Let’s investigate what potential impact a trade to either of those teams would have on Thomas’ fantasy value, as well as the impact on the Saints’ skill position players, and whether there are any other ideal destinations for Thomas if he was to be traded.

If you have owned Michael Thomas prior to 2020, then chances are you have not been left disappointed. In each of his four years in the league, Thomas has seen his receptions increase, starting at 92 in his rookie season and reaching 149 on 185 targets in 2019. Additionally, his receiving totals have grown season-on-season from 1137 to 1725, and he has added nine touchdowns in three of his four seasons. In his time in the NFL, when it comes to his fantasy returns, Thomas has never finished outside the top 10 at the wide receiver position and has never finished outside the top 30 overall.

However, this season did not start well, as Thomas was injured in his Week 1 matchup with the Tampa Bay Buccaneers, meaning he ended the game with three receptions on five targets for 17 yards, a measly 4.7 fantasy points. Despite it seeming like Thomas has been a limited participant at practice plenty of times in the past few weeks, he will now miss a seventh straight week for fantasy managers, who are desperate for production from their first-round wide receiver. Could it be that it takes a trade to re-invigorate Michael Thomas’ fantasy football value?

What could an Aaron Rodgers-Michael Thomas connection look like for fantasy?

If you have Michael Thomas on your fantasy team, then this prospect probably has you salivating like Pavlov’s dog at the sound of a bell. The Green Bay Packers are desperate for a second reliable wide receiver option to go opposite Davante Adams. Despite missing two games, Adams leads the Packers in targets, with 12 more than the next highest receiver in Marquez Valdes-Scantling.

However, the Packers saw what can happen if a team isolates Adams and minimizes his impact when they played the Tampa Bay Buccaneers, so adding a second elite receiver would prevent their passing offense from being shut down so easily.

In terms of fantasy, this feels like a win because the Packers offense is arguably more high-octane than the Saints. The downside is that Thomas would be sharing targets with Adams, meaning the chances he sees an average of 11.6 targets per game the rest of the way is less likely than if he remains with the Saints. However, equally, Thomas could benefit from having Adams drawing coverage, meaning he sees softer matchups and can do more with those targets, limiting the effect of the loss of opportunities.

When it comes to the impact on the other Packers receivers, it is Adams that likely sees the biggest drop, simply in terms of opportunities. He will also likely drop down to below 10 targets per game on average but could also benefit when Thomas sees the better coverage defender. Outside of Adams, the likes of Valdez-Scantling and Robert Tonyan could see fewer opportunities, but neither are significant enough fantasy options to be concerned.

As good as both Deebo Samuel and Brandon Aiyuk have looked in their short NFL careers, Michael Thomas would immediately become the best option for the 49ers in the event of a trade. Thomas would become the number one and should see the majority of the targets at the wide receiver position group. The question revolves around what his opportunity share will look like. This is predominantly a run-first team, with George Kittle then seeing a significant chunk of the receiving work (averaging nine targets per game).

The 49ers average 33 throws per game this season, so when we remove the nine for Kittle and the seven that the running back position sees on average, we are looking at around 16 targets to be shared between the receivers. Assuming Aiyuk, Samuel (when he returns), and Kendrick Bourne still see between 8-to-10 per game, that leaves the likelihood of fewer than 10 targets for Thomas on average. Additionally, he will also be drawing the lead coverage of the opposition, limiting his output on those targets.

While both the 49ers and Packers are teams that are willing to lean on the run when it is working, Thomas has a much greater upside in Green Bay on a week-to-week basis. However, if you are looking for consistency, then remaining in New Orleans, where Thomas has proven he can be successful, might yet be the best outcome.

Which other teams could be interesting for Michael Thomas’ fantasy value?

The Patriots appear to be sellers instead of buyers, but they may struggle to pass up the opportunity to give Cam Newton a stud wide receiver. Michael Thomas would immediately become the best receiving option on the Patriots team and could be in for a huge target share down the stretch.

Thomas and Marquise Brown would be the only two receivers of note in Baltimore. Brown is good enough that he would draw some lead coverage, which would leave Thomas with the opportunity to face weaker matchups on a weekly basis. The downside with Baltimore is that they are generally a run-first team, and what passing they do is often shared around the skill position players.

The Eagles could fix a lot of their problems by adding Thomas. They also have enough other weapons there, when healthy, that defenses wouldn’t be able to zero in on Thomas completely. Target share may not be optimal in Philadelphia but Thomas could have enough success on five to eight targets a game that it would not be that detrimental.

What does a departure mean for the fantasy value of the New Orleans Saints’ players?

We do not really need to make many deductions here as we have seen what the Saints look like without Michael Thomas on the field over the last six weeks. The offense has still been good, without being spectacular, and they have leaned heavily on Alvin Kamara, who would continue to see a huge boost if Thomas departed. Emmanuel Sanders would remain the number one receiver, having averaged over seven targets per game this season and found the end zone twice.

With a Michael Thomas trade, Tre’Quan Smith would remain an interesting option, having averaged 4.8 targets per game over his last five outings. Jared Cook will remain a constant touchdown threat, but his weekly fantasy value likely depends on those touchdowns. One of Marquez Callaway and Deonte Harris could also see significant increases in season-long fantasy value, with both having profited in the absence of both Thomas and Sanders in Week 7.