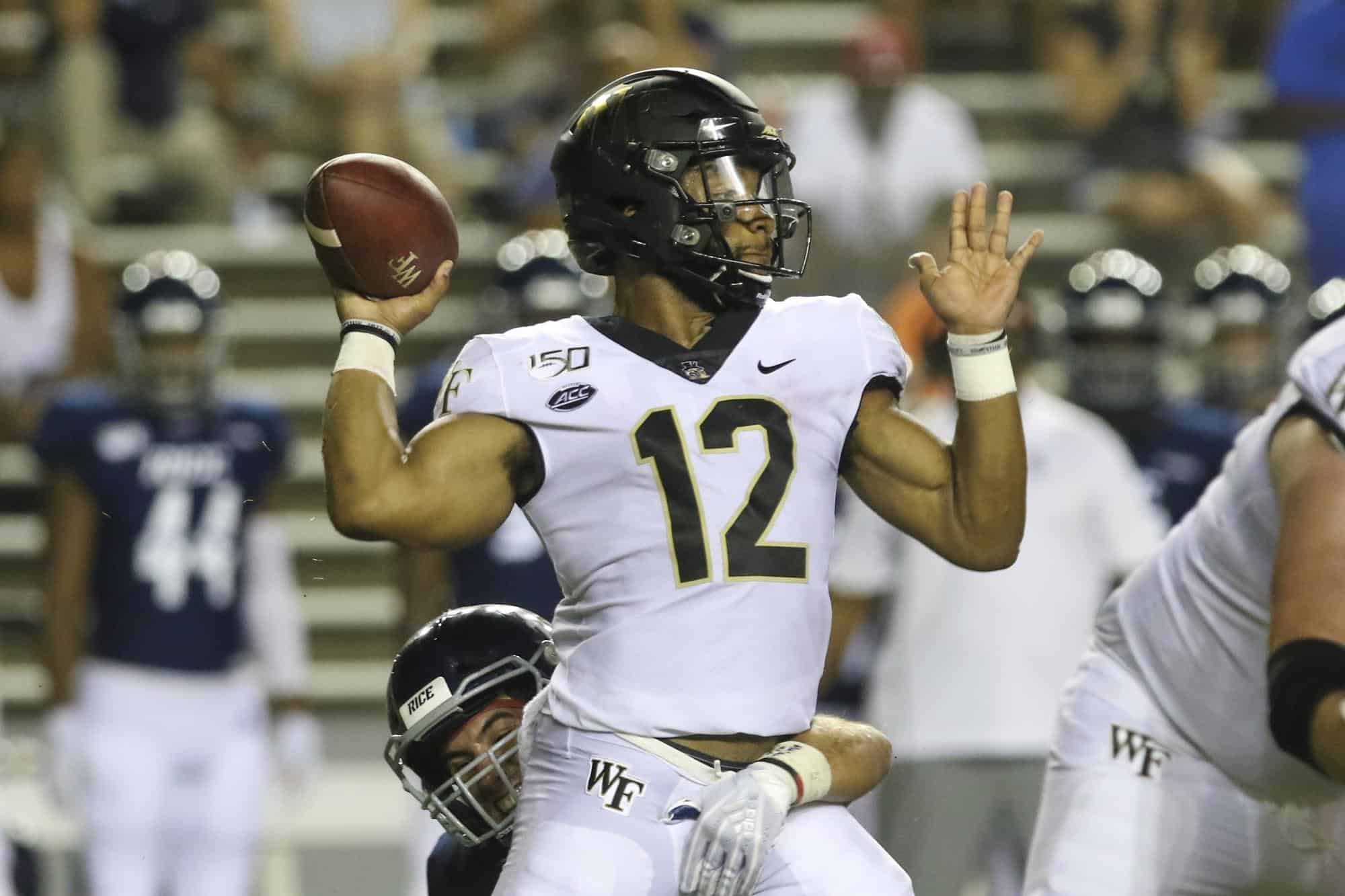 While the college football season gets underway, the ramifications of the current global climate are still being felt across the nation. Thus, many top prospects have opted out of the year to train for the next level. Gregory Rousseau, Caleb Farley, Ambry Thomas, Ja’Marr Chase, Jaylen Twyman, and more are just some names that have wrapped up their college careers. Jamie Newman is another NFL Draft prospect that opted out earlier this week.

However, for Newman, he has a fair bit more questions than the other prospects I listed above. How does his opting out affect his NFL Draft outlook?

The very reason Newman is such a polarizing figure is because of his film at Wake Forest. Listen, there are tools here to be expanded upon that are pretty impressive. The physical tools, at the very least, are lovely. Newman has a solid arm and can push the ball down the field. His accuracy outside the numbers is a bit inconsistent, but the flashes of excellent ball placement are some of the best things I watched in his film. Those tight window throws are plays that not a lot of prospects can make.

His elusiveness to create plays with his legs is something I admire as well. The ability to ad-lib out of structure is something I like to see in quarterback prospects because it makes them a genuine playmaker outside of just the play. Newman’s toughness only adds to his ability to fight and stay poised to take a hit in the pocket. The escapability comes up time and time again.

Newman impresses with the ability to work through his progressions as well, as he does not pigeon-hole himself into one read right off the snap. There is some use of his eyes to work the middle of the field safeties to open up throwing windows. His mental game is a mixed bag, but those two key traits were promising signs that there could be a lot of growth and potential to work with here.

Despite what he has naturally, Newman has a lot of work to do before he can be a starter on an NFL field. The erratic accuracy he plays with is the first of those concerning traits. Yes, there are some very nice tight-window throws that he executes, but that is hardly the constant of his film. There are many times in the intermediate passing game where he will sail balls badly over the head of his receivers.

The more I watched his film, the more that proved to be a mechanical problem. Specifically, for Newman, it was a footwork issue. Newman fails to keep an even base and can offer almost jump off the ground when he throws a pass. It causes that errant, inconsistent accuracy. His footwork feels rushed because of some internal clock issues. Even on quick hitters, that footwork issue bites him with problems.

There is a lack of anticipation in his game too. That can be traced back to some internal clock issues. However, so can sloppy pocket movement from Newman. At times, he will run right into pressure off the tackle and feel ghosts to a degree. He has to be able to manage the pocket and not suddenly roll out just because he can.

However, the biggest issue I always had with Newman was the mental process he employs. When a picture changes pre-snap to post-snap, Newman can be caught napping and throw interceptions as a result. Whether that is rotation on the back end of something as simple as a linebacker dropping out, Newman does not process these changes, and it gets him into a world of hurt too often.

This is the point where I wish I were more optimistic. Newman is a guy who has the tools to be something in the NFL. He can make quick reads and flash them in a small window, while also being a threat with his legs. This, to a degree, was part of why he was so successful using RPOs at Wake Forest. With Todd Monken at Georgia, this was one of the places he could have thrived and opened up his stock to a great deal.

However, without another season of tape to see if he could take strides, Newman is stuck in no man’s land. The tools are intriguing, yes. On the other hand, there is so much to be worried about on his tape. Therefore, I have reservations about any team taking a chance on Newman early.

The process could help him with a strong Senior Bowl, perhaps, but that can not alleviate a lot of these concerns that showed up on his tape. The tools are encouraging, but Newman is probably a day-three prospect for teams to take a chance on right now. There are just too many questions and too much to work on for him to warrant a significant investment.